The producer of Real Housewives of New Jersey and Pawn Stars is taking reality TV into a new and controversial realm Sunday night – broadcasting brain surgery live from a Cleveland hospital.

Inside University Hospitals Case Medical Center, more than a dozen cameras will film neurosurgeons as they implant electrodes deep in the brain of 49-year-old Greg Grindley, hoping to halt severe tremors caused by Parkinson’s disease. A 60-foot-long television production truck like those used for major sporting events will serve as the hub for a crew of 100 coordinating the show.

The primetime event on the National Geographic Channel comes as medical experts warn such programming can be risky and exploitive. Some surgical societies have banned the practice, with one even threatening to discipline surgeons who conduct live operations for television audiences.

“It’s hard to say we are getting serious about patient safety when putting on circus acts like live brain surgery,” said Duke Cameron, the cardiac surgeon-in-charge at The Johns Hopkins Hospital in Baltimore. “This kind of behavior is absurd.”

Cameron, who has consulted for groups writing guidelines for live surgeries, said in an interview that operating teams can be distracted by filming and that commercial and promotional interests can compromise patient safety. 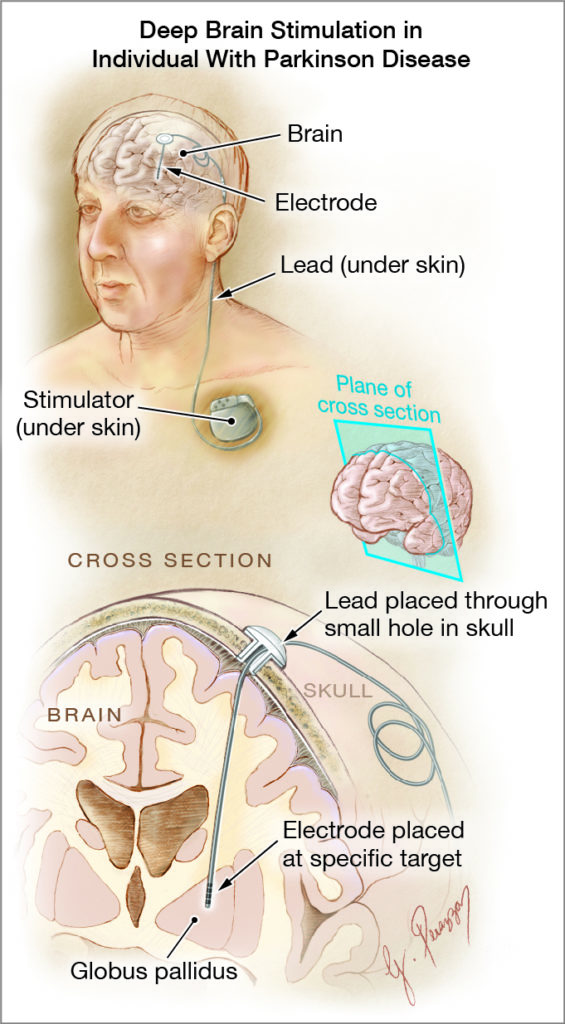 The event will showcase University Hospitals, which has a much lower national profile than the neighboring Cleveland Clinic. It will also feature equipment and devices made by companies that have financial relationships with neurosurgeons at the medical center. That information will not be disclosed during the telecast, which will be hosted by Bryant Gumbel.

Leftfield Pictures, the company producing the special, approached several facilities before signing up University Hospitals. Two major medical centers told Stat they turned away Leftfield because they were uncomfortable with broadcasting live.

A University Hospitals spokesman said the live procedure will help demystify an important treatment for Parkinson’s disease and that “the care of the patient comes first and it will be of prime importance during this surgery.”

The show producers say they are taking their cues from the medical team and will not interfere in any way with the operation. “They are telling us what to do,” said National Geographic executive producer Mike Miller. He said the surgeons can terminate the broadcast at any time, even “two minutes in.”

Neurosurgeons Jonathan Miller and Jennifer Sweet will perform the operation, expected to last four to six hours, to enable Grindley to be treated with deep brain stimulation. The surgical team will open his skull to insert a thin wire and electrode that will be connected to a battery-operated neurostimulator, which is typically implanted under the skin near the collarbone. The stimulator sends electrical impulses to the electrode to block brain signals believed to cause symptoms of Parkinson’s. The treatment was approved by the FDA in 2002.

Grindley suffers severe tremors and involuntary muscle movements as a result of Parkinson’s and the medication he takes to treat his symptoms. He will be awake during the procedure to aid surgeons with pinpointing the best placement of the electrode.

In an interview with Stat, Grindley said he hopes the live broadcast will encourage other Parkinson’s sufferers to undergo the surgery.

“I came to the realization I don’t have to put up with all of this,” he said.

Grindley, a father of four, said that he is not concerned about the the operation being televised live and that the surgical team discussed the risks and benefits of the procedure with him at length.

The idea for the live show emerged from discussions between Leftfield, media company Mental Floss, and National Geographic, said David George, president of Leftfield Entertainment. He said the decision to broadcast live was an easy one.

“I think because of the nature of what is going on and given the fact the patient is awake and responsive during this procedure, there was not much of a debate for us,” he said.

Leftfield is best known for its work creating non-medical reality television shows such as Monster In-Laws and Love Prison.

Live telecasts of complex surgeries to the general public are rare. National Geographic says the event Sunday is the first live brain surgery on commercial television. More common are live surgical broadcasts during medical conferences. Even in that context, the practice is controversial.

Two patients died in the last two years after undergoing live procedures during meetings in India. In both cases, there were allegations the live broadcasting of the operations played a role in the complications leading to death. The physicians and medical societies involved have denied those allegations.

In one of the cases, the patient died after removal of a tumor near his pancreas. A medical journal report said the surgeon “clearly felt compelled to complete the demonstration” even as members of the audience expressed concern with continuing the operation.

While acknowledging live surgery broadcasts to the public have benefits, such as reassuring prospective patients and inspiring future doctors, the Royal College of Surgeons of England says safety concerns outweigh those benefits.

Richard Huxtable, a professor of medical ethics at the University of Bristol, said studies of live surgeries have found patients are anesthetized longer and suffer complications as a result in some cases. One study of doctors found that the majority believe undergoing live surgery at a conference is not in a patient’s best interest, he said. “If the broadcast is being beamed beyond doctors, we might then ask whether the standards of ‘good’ television will lead to pressure being placed on the surgeons to depart from the standards of good medicine,” Huxtable said.

The Society of Thoracic Surgeons instructs its members worldwide not to participate in live surgery broadcasts to the public and warns that violating its guidelines could lead to disciplinary action.

The leading neurosurgery groups in the United States say they do not have policies on live surgery broadcasts.

The surgical team will implant a neurostimulator from Medtronic LLC. Miller, one of the neurosurgeons, received $42,769 in payments from the company during 2013-2014, according to filings made with the federal government. A little more than half of that amount was for promotional speaking. The rest was for consulting work, travel, and food.

Miller’s relationship with Medtronic is not reported under industry relationships on his hospital biography. The hospital, in response to questions from Stat, said it will update its website to report the Medtronic relationship.

The show also plans to feature a 3D simulator from Surgical Theater LLC that creates a model of the patient’s brain. The technology was developed at University Hospitals, and the medical center’s chairman of neurological surgery, Warren Selman, is listed as Surgical Theater’s medical director on the company’s website. He also reported owning stock options in the company in a 2013 medical article.

His relationship with the company is not disclosed in his official biography on the hospital website, which promises “transparency in our interactions with industry partners.” The hospital said his biography will be updated.

David is a project and investigative reporter.

President Biden to end Covid-19 emergencies on May 11