A half-century after DDT killed eagles, poisoned fish, and despoiled the landscape, the Zika virus emergency has prompted calls to bring back the pesticide.

Conservative groups such as the National Review and the Manhattan Institute have revived arguments on their websites that have swirled around DDT since the United States banned it in 1972, a move that gave the environmental movement its first major victory. Phasing it out was a huge mistake, the groups say, and bringing it back could save millions of people dying from mosquito-borne diseases, and spare babies the disastrous birth defect of microcephaly that has been linked to Zika.

Some public health experts have also raised the possibility of using DDT to control Zika. Experts on mosquito control, however, say it would be futile.

“The widespread resistance to DDT today [among mosquitoes] means it wouldn’t work,” said Joseph Conlon, spokesman for the American Mosquito Control Association, a nonprofit focused on suppressing the insects. “For that reason, people need to understand that chemical sprays are not the answer to Aedes aegypti,” the species that carries Zika (as well as yellow fever, dengue, and other diseases). “We have much more effective means of getting rid of this mosquito.”

Although an official at the US Centers for Disease Control and Prevention has been quoted as saying that environmental concern about DDT “has to be reconsidered in the public health context,” CDC spokesman Tom Skinner said the agency is “still working on vector control plans for Zika.”

What sprays will be used has not been decided yet, but this “all of the above” approach reflects the challenging biology of Aedes aegypti.

The most significant challenge is that Aedes evolved widespread resistance to DDT in the decades after the pesticide came into widespread use in the 1940s. The extent of that resistance has likely waned in the decades since use of the pesticide was curtailed, with more of the mosquito population evolving back to its pre-resistant, susceptible-to-DDT status. But that does not mean resistance has disappeared or that it will not come roaring back in response to DDT spraying.

“Once you have resistance, it generally stays in a population for a long time,” Conlon said. “It’s not ephemeral like resistance to other pesticides, where a population reverts back to being susceptible.”

Related: The Zika questions that science needs to answer

The United States banned DDT in 1972 after it was found to persist in the environment for decades, build up in food chains, and kill eagles, pelicans, and other wildlife. But the pesticide was never banned globally. Though the 2001 Stockholm Convention called on countries to eliminate use of DDT and related chemicals, DDT is still used in African and other countries to control malaria-carrying mosquitoes (which, as predicted, evolved widespread resistance to the chemical).

A significant concern about DDT is that when a mosquito population evolves resistance to it (as individual insects that harbor DDT-defying mutations leave countless more descendants than vulnerable insects), the creatures also develop resistance to other, safer insecticides. 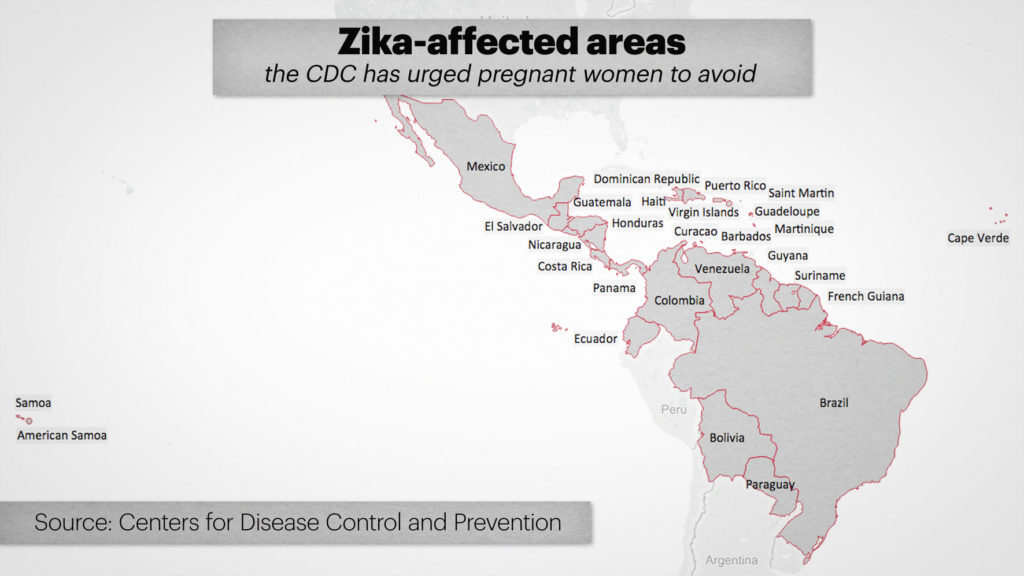 In particular, mosquitoes can develop what’s called cross-resistance to a class of insecticides called pyrethroids, which are safer than DDT: genes that allow insects to survive DDT can also allow them to survive pyrethroids. As a result, if countries hit by Zika were to spray homes with DDT, it could render a mosquito population resistant to effective pesticides currently in use.

Another reason not to count on DDT is that Aedes breeds in small containers — cans, bottlecaps, trash, old tires — that hold rainwater, not the ditches that are more accessible to chemical spraying. “Even larvicides are problematic,” said Conlon, since they will have trouble reaching the tiny containers of water harboring just-hatched mosquito eggs.

The most effective way to fight Aedes is to eliminate its breeding sites, Conlon said, which will require a massive public effort, with people pitching in to eliminate trash and other sources of standing water in their communities.

“You’re probably going to have to look at a military-style campaign of house-to-house [chemical] spraying,” said Dr. Peter Hotez, dean of the National School of Tropical Medicine at Baylor College of Medicine and an expert in pediatric infectious disease. That sort of operation, combined with other mosquito-control steps, such as draining the standing water where Aedes breeds, “eradicated Aedes in several Latin American and Caribbean countries from 1947 to 1962. We should implement what was successful then,” he said.

Hotez is, however, agnostic on what pesticides should be used this time. “I am not specifically advocating for DDT,” he said. Because of mosquitoes’ resistance to DDT and other concerns about it, “there might be alternative ideas that should be considered by people much more expert than I” in insect control.

Related: What you should know about the birth defect tied to Zika virus

Epidemiologist Brenda Eskenazi of the University of California, San Francisco, who led a 2009 study raising concerns about the human health effects of DDT exposure, agreed that DDT might not work in Brazil and other countries where Zika is spreading. “They should use whatever they can to control the virus,” she said, “but they have to do it safely.” According to news photos, “men in hazmat suits are spraying pesticides around women and children” who have no protective clothing or anything else, she said, “which is horrible and upsetting.”

One recent authoritative review of research concluded that DDT may harm human health but that there is a “lack of knowledge about human exposure and health effects in communities where DDT is currently being sprayed for malaria control.”

Calls to use DDT against Zika in some cases seem to represent reflex more than a deep understanding of mosquito control, an echo of the first battle in a long war pitting environmentalists against pro-business forces and others who think the green movement left significant collateral damage. The authors of the National Review and Manhattan Institute essays on DDT were an aerospace engineer and an economist, respectively.

Another endorsement of DDT came from an expert in global health law, Georgetown University law professor Lawrence Gostin, who told STAT it should “absolutely” be used in the Zika outbreak and called the ban on DDT “a disaster” foisted on poor people in the southern hemisphere by “rich, privileged northerners.”

The mosquito control association’s Conlon wishes it were that simple. “People who aren’t conversant with the science think of DDT as a silver bullet that was taken away from them,” he said. “They don’t realize that, for Zika, it’s not a viable alternative to pesticides now in use.”