WASHINGTON — Rising prices and a shift toward more expensive medications are driving the increases in prescription drug spending, according to a new report from the US Department of Health and Human Services.

Prescription drugs will account for about 16.7 percent of all US health care spending in 2015, up from a recent low of 15.3 percent in 2013. Back in the 1990s, the HHS report noted, retail medications were only about 7 percent of health care expenditures.

What explains this trend in drug spending? The growing number of prescriptions was one factor, but that alone was not enough to explain why spending rose so much, according to the report.

The total number of prescriptions increased from 3.5 billion in 2010 to 3.9 billion in 2014, an 11 percent jump. The report attributed most of that growth to more prescriptions being prescribed per person, while the rest of the growth resulted from an overall population increase.

But overall spending rose faster than the number of prescriptions, suggesting that higher prices were a major factor, too, according to the report. Spending on prescription drugs increased by 26 percent over the same period, from $356 billion to $424 billion. 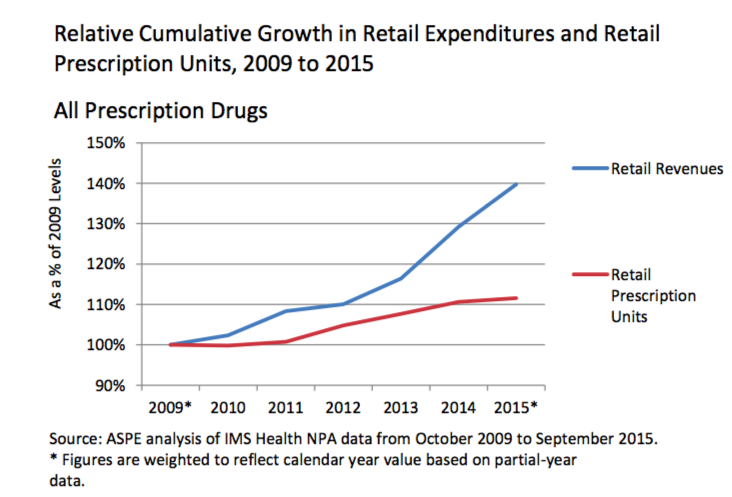 “The fact that total expenditures rose more quickly than the number of prescriptions suggests that prices are growing faster than quantities,” the authors wrote. “Therefore, price changes are contributing more to the growth in spending than is growth in volume of prescriptions.”

In a statement, Pharmaceutical Researchers and Manufacturers of America, the main industry trade group, said the report overlooks the contribution of new medications that have helped people live longer lives.

The report “ignores the tremendous value medicines provide to patients, including many that offer improved treatment options for conditions that previously had few or no options, such as cancer and multiple sclerosis,” said PhRMA spokeswoman Holly Campbell.

A shift toward more expensive medications is also contributing to the spending growth seen in the report, the authors said, although some former blockbuster drugs lost their patent protections and faced generic competition.

The number of brand-name medications dropped 42 percent from 2009 to 2015, but revenues for brand-name drugs actually increased by 13 percent over that time.

“That implies a combination of rising prices for brand-name drugs and a shift toward more expensive products among the declining number of brand-name prescriptions,” the authors wrote.

STAT Plus: Inside the fall of star MIT scientist David Sabatini