Americans broadly support new Obama administration guidelines urging physicians to prescribe fewer powerful painkillers, according to the latest STAT-Harvard poll. They blame doctors for the nation’s epidemic of opioid addiction about as much as they hold individuals responsible for abusing the drugs.

But most people are also concerned that the prescribing guidelines, issued Tuesday by the Centers for Disease Control and Prevention, could create hurdles for people who legitimately need strong pain medicine, such as Percocet, OxyContin, or Vicodin.

Seven in 10 Americans support two key elements of the guidelines: advising doctors to give patients no more than a three-day supply of opioid painkillers to treat most cases of acute pain, and trying other treatment options first before prescribing opioids for chronic pain. There was no significant difference between Democrats and Republicans.

For all their support, 55 percent of the adults polled said they were concerned that the new guidelines would make it too hard for people who need prescription pain medications to get them.

“If things work out where there are a lot of stories of people who just cannot control their pain, they are not able to do it in this type of regimen, you could have some sort of backlash against it,” said Robert Blendon, a professor of health policy and political analysis at the Harvard T.H. Chan School of Public Health, who oversaw the poll.

There was already pushback against the CDC guidelines from some patient groups after a draft was released last year. And concerns about patient access to needed pain medication led to changes in a new Massachusetts law to combat opioid addiction; it limits initial opioid prescriptions to a seven-day supply in most cases, instead of the three days originally proposed by Governor Charlie Baker. 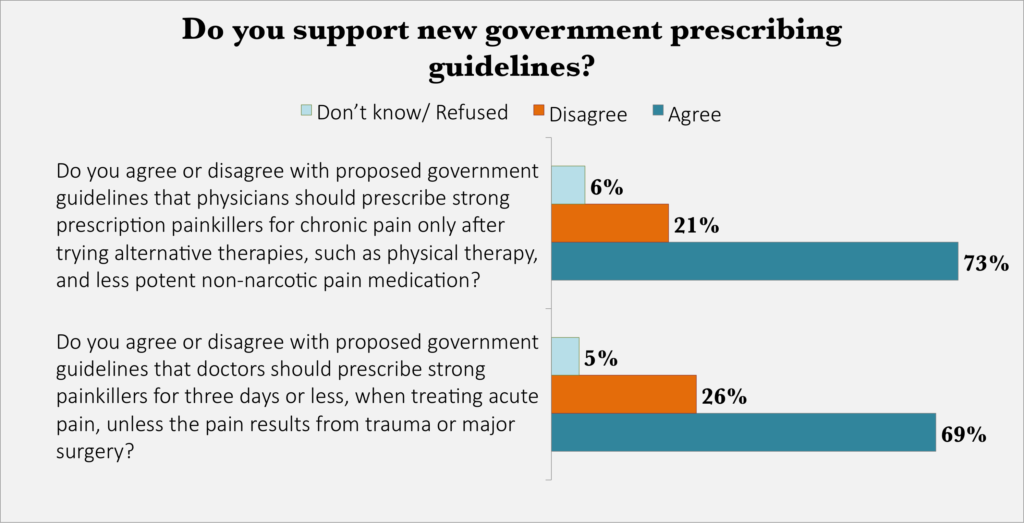 Sean Cunningham, a 24-year-old from Lehigh Acres, Fla., is among the people polled who were concerned about ensuring the ability of patients to get needed pain relief. His wife, mother, and sister all regularly take pain medicine; his wife had a herniated disc, his mom has neck pain, and his sister is quadriplegic after an accident 14 years ago.

He worries about what the CDC recommendations could mean for his family. “Unfortunately, people are going to do bad things. It’s going to happen no matter what restrictions we put on it,” he told STAT in a phone interview. But for people who live with real pain, he said, “that’s also hurting them and making their lives harder.”

The poll found that the public was split about who is mainly responsible for the epidemic that is killing nearly 16,000 Americans a year: 37 percent blamed the users of strong pain pills, while 34 percent blamed doctors inappropriately prescribing the medications.

“Ultimately, I think it’s every individual’s responsibility to know what substance they’re putting in their body,” said Brandon Deanda, 24, a self-described libertarian who lives in Tucson, Ariz.

However, for Victoria Morrison, a 36-year-old from Morris, Ill., the responsibility clearly lies with the experts who were giving out the drugs in the first place.

“It starts with the physicians,” she said.

Morrison is among the 41 percent of American adults who said they knew someone who had abused prescription drugs in the last five years. Of those, 20 percent said the abuse had led to the person’s death — meaning 1 in 12 Americans say they know someone who died from a prescription drug overdose.

At the distribution center where Morrison works, she said many workers seem to be abusing prescription drugs regularly. They started taking ibuprofen or aspirin for pain that came with the physical labor, she said, but have since advanced to Vicodin and other stronger drugs.

Morrison remembers her colleagues asking a worker who was hurt on the job for any extra prescription pain pills to give away.

“You can tell people’s attitudes are different,” she said. “They’re not who you thought they were before they started taking these pills.”

That growing familiarity with the prescription-drug abuse problem is perhaps one reason Americans overwhelmingly favor sending addicts to treatment rather than jail.

The poll found that 84 percent thought that people caught with small amounts of painkillers obtained without a prescription should be directed to treatment programs; only 8 percent said jail. The preference for treatment was also high for people possessing small amounts of heroin (80 percent) and crack cocaine (74 percent).

Blendon, the Harvard professor, described this sentiment as a “sea change” from the “Just Say No” days of the Reagan administration.

“We have completely shifted here to a treatment-prevention strategy,” he said. “This is huge.”

Isso Dayala, a 50-year-old from Worcester, Mass., said he used to favor sending people to jail for illicit drug use, but changed his mind because he now knows someone with a prescription-drug problem. That woman originally got a prescription legally but eventually became addicted. She missed car payments and directed much of her paycheck to buying painkillers. She is now in treatment, Dayala said.

“There are a lot of people involved in it,” he said. “That’s why I changed the position.”

The STAT-Harvard poll interviewed 1,011 randomly selected adults ages 18 and older by telephone from March 3-6, in both English and Spanish. The poll has a margin of error of plus or minus 3.7 percentage points.

A segment of Democrats and Republicans (45 percent and 37 percent, respectively) agreed that the government isn’t spending enough money on treatment programs.

But politics are still in play on Capitol Hill. The addiction treatment bill passed almost unanimously by the US Senate last week authorized grants for treatment programs, but Republicans rejected a Democratic amendment for another $600 million in mandatory spending. Congress already approved $400 million to address the epidemic in the government spending bill that passed in December, which was part of the GOP’s rationale for voting down the Democratic amendment.

In an age of hyper-polarization, Blendon found the consensus for government action on opioid addiction remarkable.

“Republicans and Democrats can talk about this together. They can move on legislation,” he said. “People will fight about pieces of it, but the bipartisan nature of this is really quite incredible.”

Pfizer is scolded by a U.K. trade group for remarks its CEO made about vaccination

‘Holding on by its fingernails.’ The biotech industry in Massachusetts braces for another tough year