WASHINGTON — The call to Congressman Ted Yoho’s office was a matter of life and death: A constituent was seeking help for a 5-year-old great-nephew who was suffering from a terrible brain tumor.

Could the Florida Republican push the Food and Drug Administration to give the boy access to an unapproved drug treatment that the caller had heard would help? Yoho’s office agreed.

“This treatment is the only treatment that has been successful in treating a DIPG brain tumor,” an aide wrote in an email to the FDA last July. “This is an urgent request.”

Yoho’s office, though, was wrong. The treatment, developed by a controversial Texas doctor named Stanislaw Burzynski to treat a rare form of cancer, has never been shown to be successful. Yet, for years, patients have continued to seek Burzynski out, and to ask their representatives in Congress to intervene on their behalf.

From 2011 to 2016, 37 members of Congress wrote to the FDA about Burzynski, several of them numerous times, according to documents obtained by STAT under the Freedom of Information Act. Most of the lawmakers asked the agency to grants constituents “compassionate use exemptions” so that they could try his unapproved drugs, or to allow his clinical trials to proceed.

Burzynski told STAT that the “interventions by lawmakers were helpful.”

Other letters, however, reflect the long-standing allegations against Burzynski, who has been cited by the FDA in dozens of cases in which patients have reported bad reactions to his treatment — a mix of peptides — or even died. In those letters, the lawmakers ask the agency to shut down the doctor’s clinical trials.

Lawmakers routinely appeal to government agencies on behalf of constituents in need of medical assistance. But in Burzynski’s case, the doctor’s critics say, the congressional advocacy risks giving the terminally ill and their families a false sense of hope, while also conferring a measure of legitimacy on him that many believe he does not deserve. 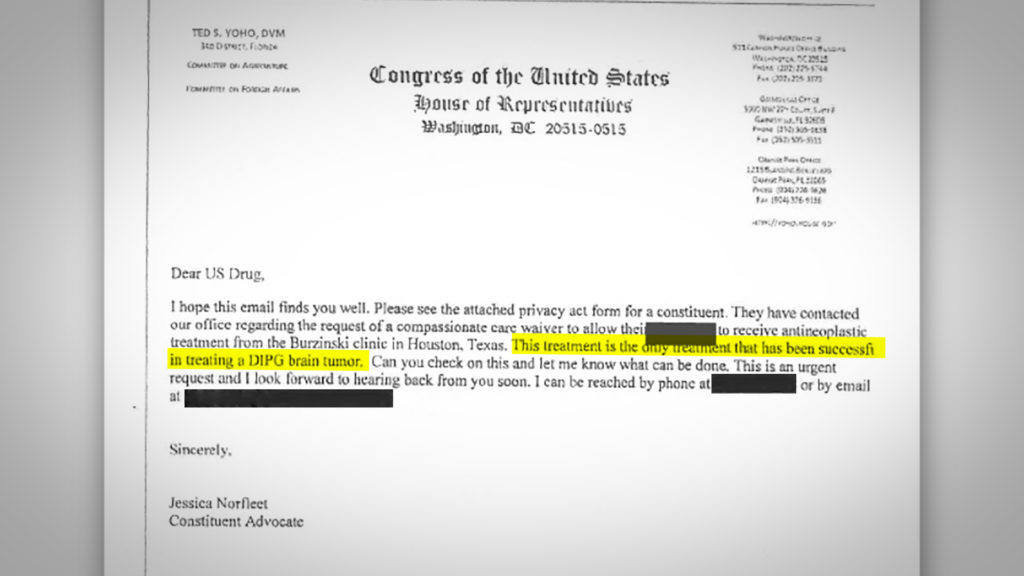 On its website, the Burzynski clinic describes itself as a “nationally and internationally recognized cancer center” and promises “cutting edge” treatment. Critics see things differently.

“If Burzynski’s concoction actually cured cancer, we’d know it by now,” said Shannon Brownlee, senior vice president of the Lown Institute, a Boston health care think tank. “I’d be shocked if he’s actually conducting a real clinical trial, so I’m not sure what members of Congress think they are doing for their constituents.”

The appeals don’t always work. In the 5-year-old’s case, for example, while waiting for the FDA to make a decision, Burzynski said he used a Texas state law to circumvent the agency and start treatment.

“He was a special kid,” said his father, Richard. “There was nothing he couldn’t do.”

A spokesman for Yoho made no apologies for his actions, saying instead that the congressmen would likely try to help any constituent who was suffering from a terminal illness.

The congressional interventions have come from Republicans and Democrats alike. Besides Yoho, Texas Republican Senators Ted Cruz and John Cornyn, and New Hampshire Senators Jean Shaheen (D) and Kelly Ayotte (R), among others, have advocated for Burzynski’s treatment for their constituents.

Representatives Doug Lamborn, a Republican from Colorado, and Carol Shea-Porter, a Democrat from New Hampshire, who has left Congress, and Joe Pitts, the Pennsylvania Republican chairman of the House health subcommittee, among others, have also pushed the FDA to grant constituents access to either Burzynski’s drugs or one of his clinical trials.

Related: He’s 20. Has brain cancer. And is caught in the crossfire between the FDA and a renegade doctor

Many of those lawmakers did not respond to requests for comment; spokesmen for others, like Phil Novack, an aide to Cruz, said the senator could not comment on constituent casework, due to privacy concerns.

“The senator believes that patients in consultation with their doctors should be free to choose a course of treatment that fits their individual medical needs,” Novack said.

Some lawmakers have taken a more hands-off approach in cases involving Burzynski, merely passing along a constituent’s request, without weighing in on what the FDA should do. Representative Lamar Smith, the Texas Republican, and California Democratic Senator Barbara Boxer, for example, did just that.

“We receive thousands of letters from Californians each year requesting assistance with federal agencies,” said Boxer’s spokesman, Zachary Coile. “We forward such requests to the appropriate agency for their review and consideration to help ensure that the constituent’s issue or concern is heard and that they obtain a timely response.”

But lawmakers can also be blinded by hope — and pass along unproven claims from Burzynski and his advocates.

In 2014, for example, a Texas mother seeking access to Burzynski’s drugs for her sick daughter wrote to Cornyn and Cruz, telling them that the doctor had seen a “nearly 30 percent cure rate” in clinical trials.

The woman also accused the FDA of denying increased access to Burzynski because of a paperwork dispute, and in other correspondence, a political vendetta.

None of those charges was substantiated, yet Cornyn and Cruz passed them along to the FDA and asked the agency to justify its actions.

As it has dozens of times, FDA’s congressional affairs office responded, mentioning the cases in which Burzynski had been cited by the agency for problems or received warnings. 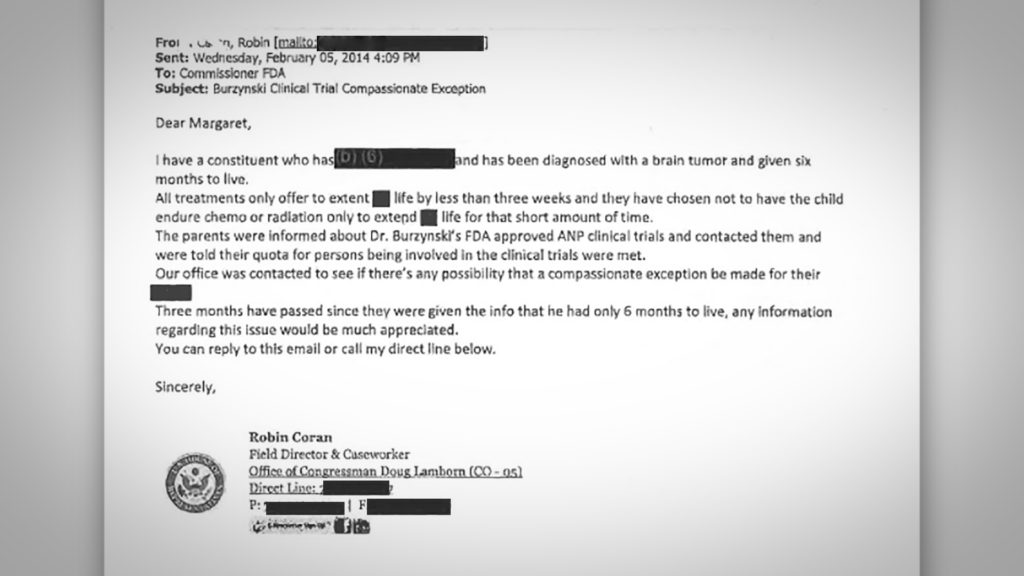 Sandy Smith wishes they would stop. In 2007, her son Andrew was being treated at Burzynski’s clinic for DIPG — or diffuse intrinsic pontine glioma, a rare form of cancer that attacks the victim’s brain stem.

Anxious about his progress, Smith began looking into the cases of other children treated there for the same cancer. They had all died.

She and her husband Shawn pulled Andrew out of the clinic and eventually brought him to the National Institutes of Health. Andrew lived another two years, an unusually long amount of time for a child with a DIPG diagnosis, and longer than any child who stayed with Burzynski survived.

On the fifth anniversary of Andrew’s death, aware that Burzynski supporters were claiming in widely distributed promotional materials that an upcoming trial would cure 1 out of 3 kids with DIPG, and fearing for those children’s safety, Smith wrote to one of her senators, Michigan Democrat Debbie Stabenow. She asked Stabenow to pass along the record of Andrew’s experience to the FDA.

Stabenow did so, and the FDA called Smith. She hopes their conversation gave the agency ammunition in its long battle with Burzynski. She believes that lawmakers who don’t fully understand what is happening in the clinic, and push for participation, do a disservice to their constituents.

“I think most people do not realize what is going on there,” Smith said. “If you go to the website, it looks amazing, that’s why we went. But we have to be careful.’’

Smith, who is a cancer survivor herself, objects to the notion that desperate patients should have the right to try any treatment – even if the FDA thinks it’s dangerous.

The FDA declined to comment on Burzynski’s clinic but said that, “generally speaking, the agency reviews letters from members of Congress and responds directly to the requestor.”

The FDA, a spokesman said, “takes seriously its role in ensuring that research subjects are made aware of the potential benefits and risks of investigational products, and are not exposed to unreasonable risks.”

The agency says that it grants nearly all appeals for compassionate use exemptions.

Burzynski, however, told STAT in a phone interview that prospective patients of his face much longer odds. Between January 2012 and June 2012, the agency permitted 17 compassionate use exemptions for his treatment and rejected five. None has been approved since then.

The FDA has, on and off, permitted him to enroll patients in clinical trials during that time.

The Texas Medical Board, meantime, has been trying to strip Burzynski of his medical license for many years. In its most recent court filing this summer, the board accused Burzynski, now 73, of unethical and unprofessional conduct regarding clinical trials of gravely ill patients, including improper care, deceptive advertising, and the use of unlicensed staff, among other charges. Burzynski has denied all charges.

Former FDA commissioner Mark McClellan, who said he was unfamiliar with the Burzynski case, said most outreach from members of Congress are on behalf of people who really have no good option left.

Generally, McClellan said, the FDA tries to establish criteria to allow individuals to use experimental treatments, with a requirement that the drug manufacturer inform the patients of benefits and risk, and be barred from charging for it.

One of the challenges seems to be keeping up with a deluge of correspondence about the controversial Burzynski.

Amanda Chuzi, a legislative correspondent for Senator Tim Kaine, the Virginia Democrat who is now Hillary Clinton’s running mate, passed the FDA a letter regarding the agency’s treatment of Burzynski.

“As your constituent,” the letter said, “I call upon you to launch a full congressional investigation into the FDA’s blatant power abuses. … The damage stemming from FDA’s vendetta against Dr. Burzynski … has extended to dying patients requesting access to Dr. Burzynski’s unique, innovative care.”

Along with the letter, Chuzi wrote, “Happy New Year!” and said the senator had received over 200 copies of that letter. If the agency had any ideas on how to respond, Chuzi said, she’d be eager to hear them.

Sheila Kaplan is a senior writer for STAT, covering the intersection of science, money, and politics.

‘This is not a cure’: Consensus begins to emerge on new Alzheimer’s drug

‘If this works, it changes everything’: Altos Labs founders lay out plan to reverse disease