The markets for illicit drugs such as cocaine and methamphetamine may be dark and shadowy, but they are influenced by many of the same mundane forces that affect wheat, computer memory, and other legitimate commodities. Some of these forces are global, like international efforts to slow the cultivation of coca plants and the smuggling of precursor chemicals. Others are local, like competition between two gangs to sell drugs in a neighborhood.

These markets are largely hidden from public view, making them difficult to analyze. Even so, data about drug prices and purity offer interesting glimpses into how they work. A key source of these data is the Drug Enforcement Administration’s System to Retrieve Information from Drug Evidence (STRIDE) database. It collects information on drugs sent to be analyzed by the DEA’s labs after being confiscated by national, state, and local law enforcement agencies or bought by undercover agents. Although the database has its limitations, and the confidence intervals around the data points are wide, STRIDE still offers decent estimates of the average market price and purity of various drugs.

Each of the lines in the data visualization below tells its own story. We highlight a few of them.

In the data visualization, drug prices generally trend downward over time. This is a continuation of a decades-long trend. Some of the decline in price can be attributed to organizational changes by drug traffickers, such as getting better at manufacturing and transporting drugs into and across the United States and other factors that reduced margins between trafficker costs and street prices. Shifts in demand, both increases and decreases, were generally triggered by changes in drug availability and substitution of one drug for another, usually because of local interdiction and enforcement policies.

Competition can significantly affect drug potency and price, especially at the city or neighborhood level. Say you are a local dealer who, through violence or structural advantage, has a monopoly on drug sales in your area. You can drive up prices without much incentive to drive up purity. Where there is more lively competition, dealers have incentives to sell higher-quality or higher-potency products to attract more business.

Cocaine. Demand for cocaine throughout the 1990s and early 2000s was relatively steady. Between 2006 and 2010, it declined by 50 percent due in part to a decrease in Colombian coca available for cocaine production; the crackdown on, and violence between, drug-trafficking organizations in Mexico; policies to reduce availability of precursor chemicals; and other factors. As supply dropped, street prices increased between 2006 and 2010 then leveled off at a new equilibrium with roughly 2.5 million chronic users (four or more days of use in the past month), which is 25 percent fewer than at the beginning of the decade. This is one of the most startling developments in US drug policy. 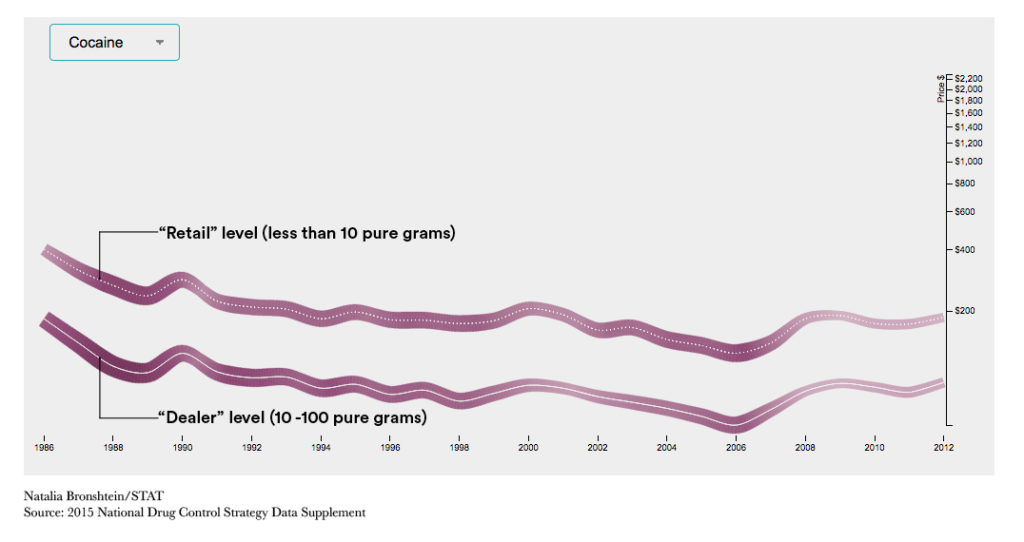 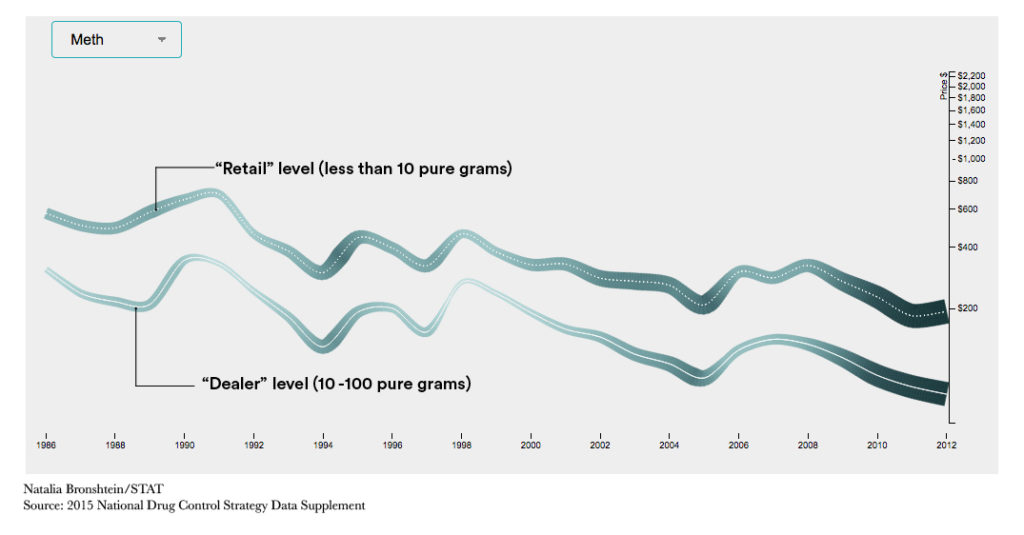 Drug dealers usually, but not always, have the purest or most potent products. That lets dealers stretch out their supplies by diluting or cutting the product.

It’s often the reverse for cocaine, with higher potency at the consumer level. Relatively low-quality cocaine can be turned into highly intoxicating crack relatively easily compared to making heroin, methamphetamine, and even marijuana hash oil. Other intoxicants, like caffeine, can be added to heighten the rush. In this way, a consumer may not be getting pure cocaine, but he or she perceives it to be a high-quality product because of its effect, and is willing to pay a premium for it. 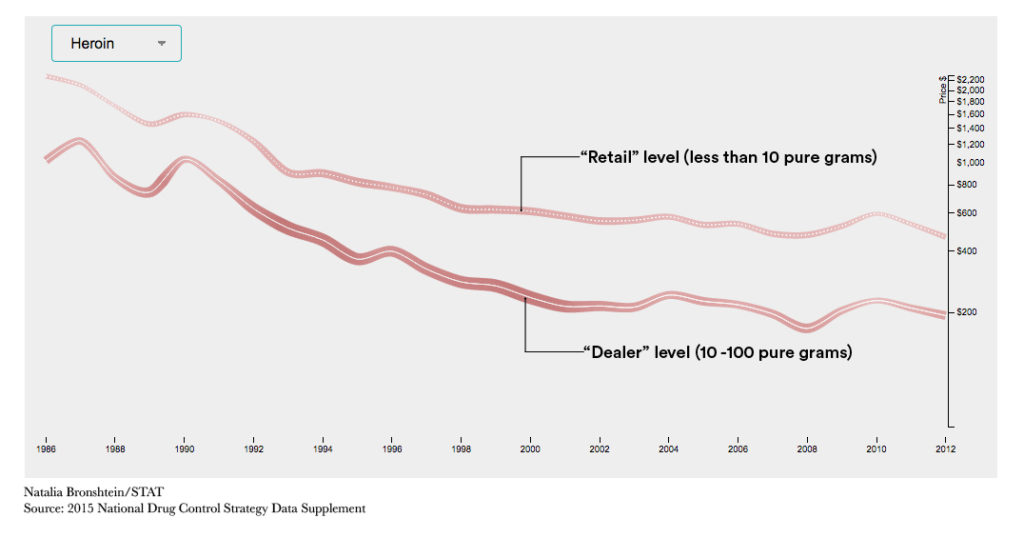 A somewhat similar evolution is occurring in the marijuana market. Hash oil is an extract made from the cannabis plant. It is 80 percent to 90 percent tetrahydrocannabinol (THC), the main active ingredient in marijuana. (Compare that to 20 percent THC in marijuana leaves and buds.) Putting hash oil on a regular or marijuana cigarette or smoking it in a bowl provides a bigger, faster rush than does smoking or eating marijuana.

Since it is now legal to grow marijuana in several states, the organizations that used to supply leaves and buds to the US are likely now looking to Mexico to make high-potency hash oil, which is far easier to ship.

The drug market is so volatile that it is difficult to project what will happen. In a project that one of us (G.M.) worked on, called What America’s Users Spend On Illegal Drugs, a small uptick in heroin use was seen starting around 2009. That has been borne out by the epidemic of overdoses from heroin and other opioids now sweeping the country. At least in the short term, we would expect heroin prices to increase as demand does.

The situation for methamphetamine is in flux. The decline in price in 2012 could persist, or we could see a continuation of the up-and-down wave in methamphetamine prices.

The trajectory of marijuana prices and potency will certainly be influenced by what happened on Election Day. In California, Maine, Massachusetts, and Nevada, voters legalized the recreational use of marijuana. Voters in Arkansas, Florida, and North Dakota approved medical marijuana initiatives.

As the number of states in which marijuana is legal increases, the price per unit of THC — the basic bang-for-your-buck formula — will decrease, and probably decrease quickly as we’re beginning to see in Colorado and Washington state. Supply increases, large-scale investment to reduce production costs, and less punitive laws against possession all suggest cheaper prices in the future.