The new Ebola outbreak on the western edge of the Democratic Republic of the Congo has ignited serious concern at the World Health Organization, with signs pointing to an epidemic that may have been underway for weeks or months.

Though there are only two confirmed cases at this point, preliminary investigations point to cases in several locations that may date back as far as early this year, Dr. Pierre Formenty, the WHO’s top Ebola expert told STAT. There is also fear that two health care workers may be among the infected, which happens often in Ebola outbreaks and can fuel the disease’s spread.

The country’s ministry of health, which declared the outbreak on Tuesday, said then that there are at least 21 people known to have symptoms consistent with Ebola, and 17 of whom have died.

Trending Now: If you think health care is dysfunctional now, just wait until after January 1

While the outbreak is in a remote area where road travel is taxing and slow, one of the towns where cases may be occurring, Bikoro, is a port on a lake that connects to the Congo and Ubangi rivers. That opens up the disturbing specter of infected individuals traveling by boat to DRC’s densely populated capital, Kinshasa, or to Brazzaville, the capital of the neighboring Republic of the Congo to the south, or Bangui, the capital of the Central African Republic to the north.

“If it was only the roads, we know that the roads are very bad and that it’s difficult for people to travel. But if you reach Bikoro and you take a boat … everything could happen,” Formenty said in an interview on Wednesday.

“For us it’s a worrying situation in a bad context in terms of logistics. And we need to go fast.” 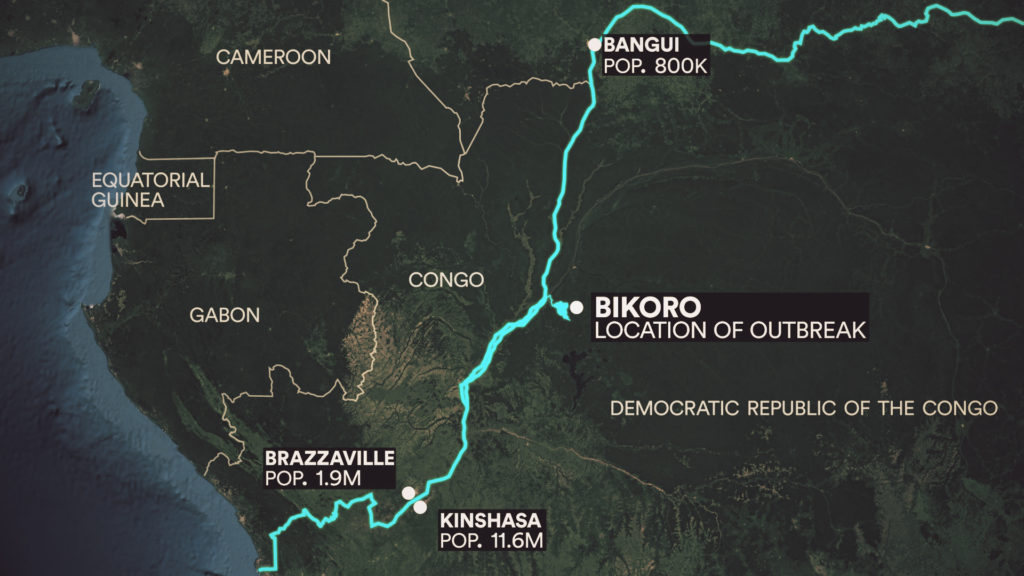 Formenty spoke to STAT after a more than two-hour-long conference call with organizations that will be involved in planning and executing the outbreak response.

He said a team made up of people from DRC’s ministry of health, the WHO, Doctors Without Borders — which takes the lead on running Ebola treatment units during outbreaks — arrived in Bikoro on Wednesday. Formenty will travel there this weekend.

Over the next few days, more responders will be sent to the area to set up testing and treatment operations, plan for an expected vaccination campaign, and investigate how big the outbreak is and how far it may have spread.

Although to date the number of confirmed cases is small, the signs are troubling. Formenty, a veteran of many Ebola outbreaks, noted that there have been suspected cases in at least two locations — Bikoro and a village called Ikoko-Impenge, which is nearly 40 miles away on roads that can only be traveled on motorbikes.

Among the suspected cases, there are individuals who cared for sick people, as well as people who attended funerals of suspected cases. Looking after someone sick with Ebola and taking part in traditional burial practices — which may involve washing and touching the deceased — are classic ways Ebola spreads through communities.

The regional hospital is in Bikoro. The WHO was informed Wednesday of four new suspected cases there, two of whom are health care workers. “Maybe these two health care workers are just severe malaria cases, but my gut feeling says probably not,” Formenty said.

Health care workers are at exceptionally high risk during an outbreak, especially during the early days before it’s clear that Ebola is present. The WHO’s expert advisers on vaccines have said in the past that they should be offered vaccination during an outbreak — and Formenty said he expects that to happen this time.

“So the heath care workers in the catchment area of this outbreak — which is quite large, by the way — are going also to be proposed to be vaccinated and to be part of the vaccine trial,” he said.

The final decision on whether to use an experimental vaccine being developed by Merck rests with the ministry of health. But Formenty noted that during an Ebola outbreak in the country last year, officials agreed to use the vaccine.

In that outbreak, transmission stopped after only eight cases and the vaccine was not deployed. But that earlier approval should speed the process of an emergency use authorization this time, he said.

An earlier version of the story incorrectly identified the village of Ikoko-Impenge.