It is looking like Merck’s Ebola vaccine may be about to get field-tested.

The World Health Organization said Friday it is putting everything in place to be able to use the experimental vaccine to help extinguish a worrisome outbreak in a remote area in the western part of the Democratic Republic of the Congo — though using the vaccine there will require some herculean efforts.

“This is a highly complex, sophisticated operation in one of the most difficult terrains on earth,” Dr. Peter Salama, WHO’s deputy director-general for emergency preparedness and response, said during a news conference in Geneva.

The country’s government still must agree to authorize the vaccine — which has not yet been licensed — under a compassionate use protocol, Salama said, adding the WHO expects to receive a go-ahead “in the coming days.”

“And in the meantime, we are preparing as if it will be a green light,” he said, noting that Gavi, the vaccine alliance, has agreed to pay for the vaccination campaign, if it occurs.

There are currently 4,300 doses of Merck’s V920 vaccine in Geneva, held by the WHO, the company told STAT in an email. Merck has given its permission for that stock to be used in DRC.

“Merck also is collaborating with WHO to provide additional doses beyond those already present in Geneva as needed to support the current response,” the company added. Merck has a stockpile of more than 300,000 additional doses in the United States. 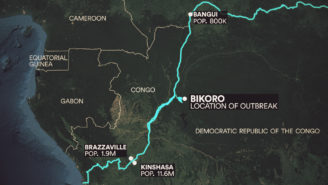 Deploying vaccine will take military-like planning. For one thing, the vaccine must be kept at sub-zero temperatures — minus 76 to minus 112 Fahrenheit. In a region where electricity is spotty, that will require freezers and generators to maintain what is called the “cold chain.”

“This is not a simple logistical effort,” Salama said.

The epidemic, in and around a town called Bikoro, has set off major alarm bells. Although the outbreak was only declared on May 8, the WHO believes there may have already been at least 34 cases, including three health care workers, with infections dating back into April. Of those people, as many as 18 have already died; one of the health workers is among the dead.

There are cases in at least three locations, over a remote part of the world where there are few paved roads, little electricity, and poor sanitation, Salama said. In some places, the only way from one place to another is to spend hours on a motorbike.

“It is absolutely a dire scene in terms of infrastructure,” he said.

The WHO is in talks with the World Food Program to establish an air bridge into Bikoro, and hopes to have helicopters ferrying in material by the weekend. Also, work is underway to enlarge the airstrip at Bikoro. It is currently too small to handle planes, which will be needed to bring in the supplies and people required to respond to the outbreak, he said.

A major source of concern is that Bikoro is a port on Lake Tumba, which connects the Congo and Ubangi rivers.

In most Ebola outbreaks in the DRC — this is the country’s ninth — remote settings have been a mixed blessing. They make it hard for response teams to travel to and within the outbreak area. But they also minimize the risk the disease will spread to larger centers where more people would be at risk.

Closer still is Mbandaka, the provincial capital of Equateur, the province Bikoro is in. It has a population of about 1 million people.

“If we see a town of that size infected with Ebola, then we’re going to have a major urban outbreak, which is going to be a real challenge in order to respond,” Salama warned. “As we saw in … West Africa, once Ebola gets into urban areas, especially poor urban slums, it’s extremely difficult to get rid of the disease.”

Last year about this time there was another Ebola outbreak in DRC. The country’s health ministry was slow to authorize emergency use of the Merck vaccine then. By the time they agreed, the outbreak was contained and the vaccine was not used.

Trending Now: Why fentanyl is deadlier than heroin, in a single photo

This time, though, the issue of vaccine use appears to be gaining steam more quickly. Experts believe that having studied the vaccine and the emergency use process once before, the government will move more swiftly if it appears there is a need to vaccinate this time.

World Health Organization Director General Tedros Adhanom Ghebreyesus tweeted Friday that he had spoken to the country’s health minister, Dr. Oly Ilungo. “We agreed to ship vaccines as quickly as possible so they can be used to save lives,” he wrote.

Yesterday I spoke by phone with the Minister of Health of the Democratic Republic of the Congo @OlyIlunga to discuss the #Ebola response in #DRC. We agreed to ship vaccines as quickly as possible so they can be used to save lives.

There are a number of experimental Ebola vaccines at various stages in development, but the Merck vaccine is the only one to date that has been shown to work in people. (The others may well work but their developers haven’t yet been able to prove that with Phase 3 clinical trials.)

In a clinical trial in Guinea during the disastrous West African outbreak, the Merck vaccine was shown to be highly effective and to generate immune protection quickly — two factors that are highly desirable in a vaccine designed for outbreak response.

The plan is to use a “ring vaccination” approach, vaccinating people who were in contact with cases to try to prevent onward transmission. That was the approach used in the Guinean trial.

Salama said that among the dozens of responders the WHO and its partners are sending to Bikoro are about 40 people who conducted that trial. “Because there aren’t many people with experience of utilizing this vaccine in field conditions,” he said.

This story has been updated to reflect the latest case count issued by the World Health Organization.

No longer invisible: The faces of rare disease