When STAT first compared projected U.S. deaths from Covid-19, in early April, there seemed to be a glimmer of good news: A prominent model had just lowered its estimate for total deaths through Aug. 4 from about 100,000 to 60,000, reflecting the apparent success of three weeks of social distancing across much of the country.

On Wednesday, April 29, the country blew past 60,000, more than three months before the Institute for Health Metrics and Evaluation projected. (The 60,000 almost certainly undercounts Covid-19 deaths, by about 9,000.) IHME, whose model has been criticized by many epidemiologists, now says the most likely death toll on Aug. 4 will be 72,433, though it could be as low as about 60,000 (obviously impossible) and as high as 115,000.

As some models stumble, and many no longer even try to project more than a few weeks, the Centers for Disease Control and Prevention has added models to those it highlights on its website. One stands out for the fact that it is not associated with a big-name institution. Produced by independent data scientist Youyang Gu, it has been tracking actual U.S. cases and deaths better than many.

As with all the numbers swirling around the pandemic — more than 3.2 million cases and 230,000 deaths worldwide — these are challenging to grasp. Gu’s lower number is roughly the capacity of the Florida Gators’ stadium in Gainesville; imagine a homecoming game crowd all dying. It is the number of passengers in 360 full long-haul 767s. It is nearly double the number of U.S. combat deaths in the Vietnam War. And 293,381, of course, is nearly triple any of the above.

With U.S. deaths from Covid-19 passing 61,000 this week, the question is as difficult as ever: Are these large numbers or small numbers?

At the beginning of the pandemic’s spread in the U.S., President Trump dismissed early projections of thousands, even tens of thousands, of U.S. deaths as no  worse than the lives lost in an average influenza year. So far this season, flu deaths total 24,000 to 62,000 (data from the Centers for Disease Control and Prevention are estimates with wide uncertainties). Whether you think a tally as much as 12 times higher is a tragedy or merely unfortunate is a personal call.

For comparison, about 8,000 Americans die every day from, almost overwhelmingly, diseases and other natural causes. Those, of course, haven’t stopped; Covid-19 deaths are in addition to those (with a caveat noted below). 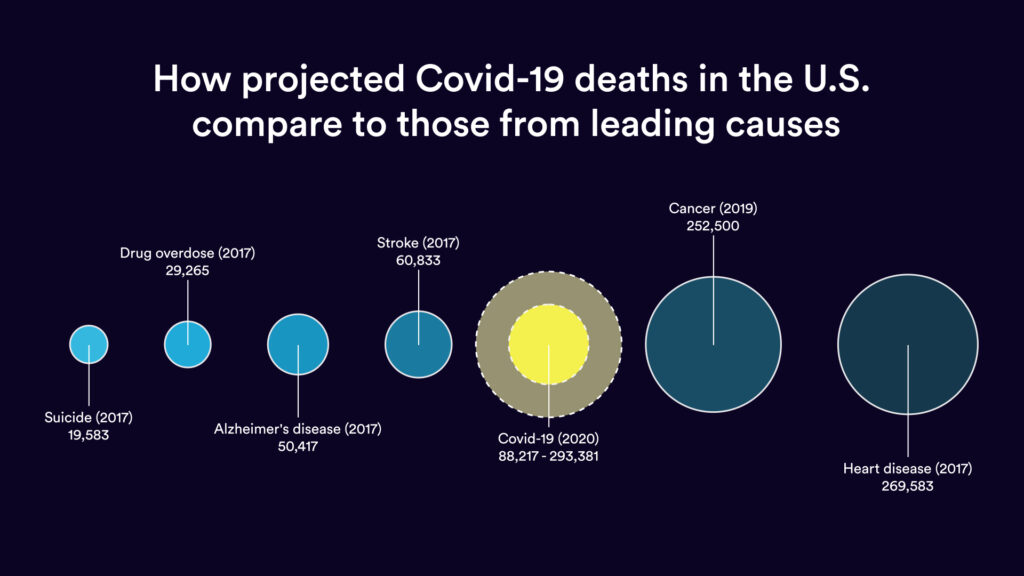 To make these numbers easier to understand, we show how 88,000 to 293,000 compares to some leading causes of death and to previous pandemics.

After our last story, many readers complained that our numbers of annual deaths from other causes were wrong, so one note about the methodology we used then and now: The models project that Covid-19 cases and deaths will decline in the next few weeks, as they have already done in Seattle, San Francisco, and other places. If stay-at-home orders and other countermeasures keep working, there should be few deaths after July. We therefore treated the total projected deaths as occurring over five months, from March to the end of July, and therefore calculated five months worth of cancer, heart disease, and other deaths.

Support STAT: If you value our coronavirus coverage, please consider making a one-time contribution to support our journalism.

Because Covid-19 deaths are “truncated into weeks,” as Anthony Fauci, a member of the White House Covid-19 task force and director of the National Institute of Allergy and Infectious Diseases, has said, they both capture our attention and overwhelm hospitals.

Covid-19 is particularly severe in — and more likely to kill — the elderly and people with existing illnesses, including heart disease. Some people taken by Covid-19 would likely have died from these diseases even in the five-month time frame. We do not try to calculate how many of the Covid-19 deaths “substitute” for other deaths; that is an important calculation that researchers will be eager to do once the crisis passes.

You may believe a different methodology paints a truer picture of how Covid-19 deaths compare to others. As we said, how to think about deaths is deeply personal.

Tracking the bird flu, experts see a familiar threat — and a virus whose course is hard to predict

STAT Plus: Leading ALS advocacy group roiled by infighting over money and priorities