The counter-narrative began almost instantly. After the U.S. count of Covid-19 cases began an inexorable rise in June, the White House sought to assure Americans that the increase was, basically, an illusion, created by an increase in testing for the novel coronavirus.

In a June 15 tweet, President Trump said testing “makes us look bad.” At his campaign rally in Tulsa five days later, he said he had asked his “people” to “slow the testing down, please.” At a White House press conference last week, he told reporters, “When you test, you create cases.”

And in an interview with Fox News that aired Sunday, Trump could not have been clearer: “Cases are up because we have the best testing in the world and we have the most testing.” Basically, the president was arguing that the U.S. had just as many new cases in June and July as it did in May but, with fewer tests being done in May, they weren’t being detected; with more testing now, they are.

A new STAT analysis of testing data for all 50 states and the District of Columbia, however, shows with simple-to-understand numbers why Trump’s claim is wrong. In only seven states was the rise in reported cases from mid-May to mid-July driven primarily by increased testing. In the other 26 states — among the 33 that saw cases increase during that period — the case count rose because there was actually more disease.

Related: How to fix the Covid-19 dumpster fire in the U.S.

May had brought signs of hope that the U.S. had gotten its Covid-19 outbreak under control, with about 20,000 new cases reported per day after April highs closer to 30,000. But by late June, the daily count climbed to about 40,000, and now it’s at about 70,000. The STAT analysis shows that spread of the virus, far more than testing, explains that increase.

Without a doubt, many cases of Covid-19 in March, April, and May weren’t picked up. In late June, Centers for Disease Control and Prevention Director Robert Redfield told reporters that as many as 90% of cases had been missed; that is, although there were 2.3 million confirmed cases in the U.S. then, some 20 million people had probably been infected. But that reasoning applies today, too: Despite months of government claims to the contrary, not everyone who wants, or should have, a test is getting one.

Cases are going up in the U.S. because we are testing far more than any other country, and ever expanding. With smaller testing we would show fewer cases!

Simple math belies the “it’s just because of more testing” claim — with some fascinating exceptions.

Using data from Covid Tracking, STAT looked at the number of people tested and the number who tested positive for the disease (cases) in every state and Washington, D.C. We did that for three dates: in mid-May, mid-June, and mid-July. (Due to reporting anomalies, the dates selected sometimes differed by a day or two between states.)

But the number of cases per thousand, which is independent of the number of tests, has skyrocketed. On May 13, Florida recorded 479 cases; on July 13, it found 12,624. If the prevalence of Covid-19 were the same in July as in May, Florida would have found only 2,098 cases. In other words, 10,526 of the July 13 cases are not due to increased testing, but, instead, to the increased prevalence of disease.

Florida Gov. Ron DeSantis, however, echoes Trump’s explanation, telling a Saturday press briefing that his state’s soaring caseload is largely the result of more testing of people with no or minimal symptoms. “We’re now capturing a lot of those folks,” he said.

In fact, Florida has seen a sevenfold increase in cases in the past month, said Youyang Gu, who developed a well-respected, machine-learning-based model of Covid-19 whose projections have been quite accurate. “In the same time span, the number of tests only increased by a factor of two,” he said. “Obviously, if you double the testing but the number of cases increased sevenfold, then the virus is clearly spreading.” 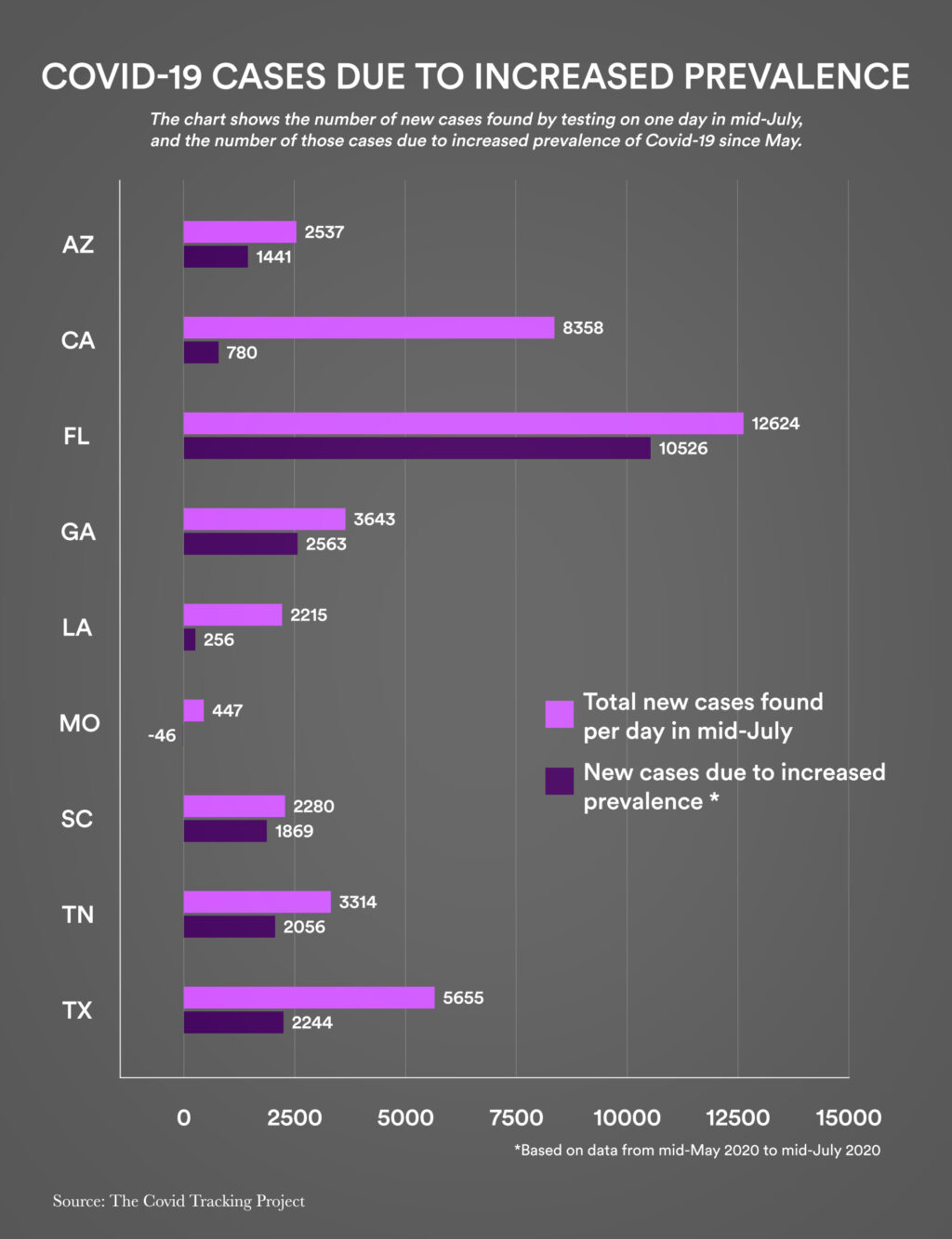 The complete data for all 50 states can be found here.

Other states with soaring cases tell the same story as Florida.

South Carolina has also experienced a steep rise in prevalence as its case count quintupled: Of the 2,280 cases on July 9, 1,869 were due to rising prevalence, not more testing. Texas and Georgia are similar: rising case counts well beyond increases in testing. In all, 26 states that did more testing in July than in May found more cases because Covid-19 was more prevalent. In 15 of them, the number of cases per 1,000 people tested had more than doubled.

Seven states (Colorado, Indiana, Michigan, Missouri, North Carolina, Ohio, and Wisconsin) meet the three criteria needed to support Trump’s claim that we’re seeing more cases only, or mostly, because we’re doing more testing. The criteria are doing more tests in July than in May, finding more cases on a typical day in July than May, but seeing the number of cases per 1,000 tests decline or remain unchanged from May to July.

Take Missouri. It’s reporting more cases, but not because the virus is exploding there (despite those crowded holiday scenes at Lake of the Ozarks). Its case finding rate has been pretty stable or even declining, from 48 in mid-May to 44 in mid-July. By tripling its number of daily tests, Missouri is finding roughly triple the number of cases.

Related: The U.S. is the accidental Sweden, which could make the fall ‘catastrophic’ for Covid-19

California comes close to meeting the three criteria, but doesn’t quite. Its number of daily tests more than quadrupled from May to July, from roughly 32,000 to 137,000. But the rate of cases being found has risen, though only about 10%, from 55 to 61 per 1,000 tests. So a big reason — but not the main reason, as in Missouri — more cases are being found is that more testing is being done. Washington is similar: more testing, more cases, but also slightly greater prevalence of disease in mid-July compared to mid-May; its worsening situation is real.

In fact, 16 states plus the District of Columbia are like New York. They tested much more, but found fewer cases in July than May — in most, not only “fewer” in the sense of fewer cases per 1,000 but fewer in absolute terms. New Jersey reported 10,246 tests and 1,144 cases on May 14, and 20,846 tests with a mere 393 new cases on July 14. Again, the virus hasn’t disappeared, but the expansion of testing, far from “creating” cases, has brought good news: In these states, it’s much less prevalent than it was two months ago.