The surge in Covid-19 cases that began in early November has raised questions about how hospital systems nationwide are handling the pandemic and whether there are enough beds and staff to take care of hospitalized patients.

A big concern is whether hospitals in nonmetropolitan areas will be able to keep up.

A number of groups, such as the University of Minnesota Covid-19 Hospitalization Tracking Project, which I work on, The Atlantic’s Covid Tracking Project, and others have been tracking key hospitalization metrics obtained from state department of health and governor’s websites daily since mid-March. The federal government, through it HHS Protect, also started releasing daily updates in late-July.

Related: ‘People are going to die’: Hospitals in half the states are facing a massive staffing shortage as Covid-19 surges

Anecdotes in the media have raised concerns that rural areas, which already have lower capacity, are no longer able to transfer their patients to nearby cities as the hospitalization surge is affecting cities and rural areas alike. In addition, even when capacity may not appear to be problematic at a state level, capacity in an individual county or city may be seriously constrained. Such concerns emerged with reference to a high number of cases and high positivity rates in local areas such as Metro East, five counties in Southern Illinois across the river from St. Louis, where about 8% of those being tested for Covid-19 are positive for it — even though Illinois as a whole had not have experienced significant increases in hospitalization in previous weeks.

This week, the Department of Health and Human Services released new data on Covid-19 capacity data at the hospital facility level. It includes information on hospitalizations, intensive care unit use, and hospital bed capacity, represented as either daily averages or aggregates in a given week. These data are expected to be released on a weekly basis going forward.

Our team reviewed the data and collaborated with several teams of journalists and data scientists from Careset Systems and COVID Exit Strategy, among others, to prepare a community FAQ about the facility-level capacity data. In addition to describing the data in detail and providing links to potential outside resources (such as census data and hospital cost data from the Centers for Medicare and Medicaid Services), we addressed the questions users of these data may have. We have also created a first-of-its-kind interactive dashboard to visualize hospital capacity at the county-level for the entire U.S.

This data release makes it possible to examine whether metro and nonmetro areas are experiencing Covid-19 hospitalizations and capacity in different ways, and whether certain counties and cities are particularly strained even though the larger state or metro area may not be. 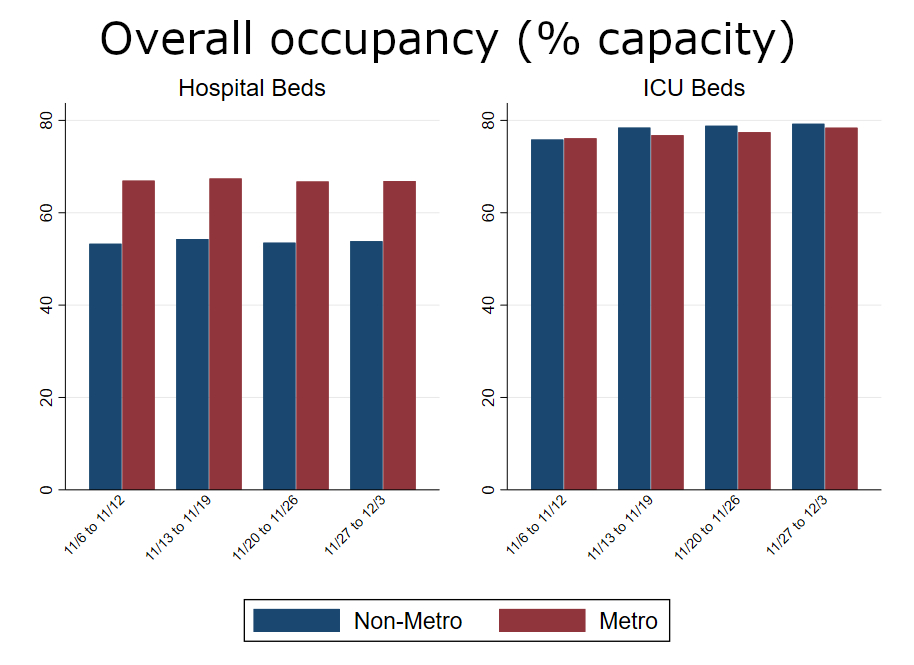 Related: On the ground, the pledge to vaccinate 20 million against Covid-19 in December seems unrealistic 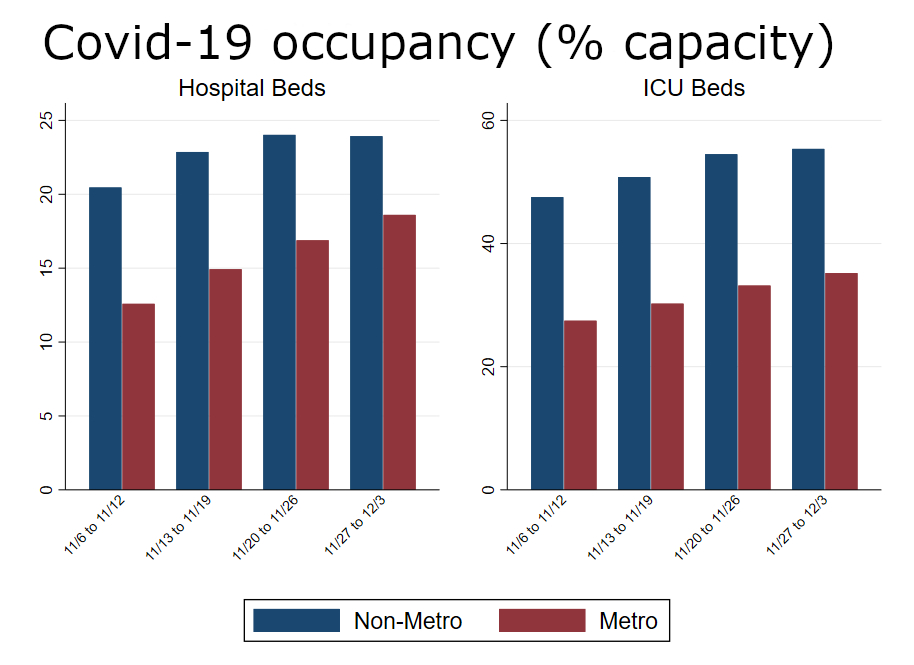 Limited access to hospital beds in nonmetro raises important concerns about how to address this resource shortage. In earlier work, our team showed that Covid-19 occupancy in a hospital on a given day, particularly occupancy of ICU beds, is significantly associated with increased mortality in the next seven days.

Unfortunately, infrastructure constraints make it difficult to add ICU beds. And while transferring patients from non-metro hospitals to hospitals in nearby metro areas may have been an option earlier, surge-related capacity constraints in metro-area hospitals may make such transfers more difficult.

These data reveal an important distinction between the average occupancy rate of hospitals within a geographic area (a city, metro area, or state) and the overall occupancy rate overall in that geographic area. The latter compares the aggregated number of Covid-19 hospitalizations across the geographic region to the aggregated number of beds. It’s a useful metric, but it may mask widely different experiences of individual hospitals. On average, a state may look stable in terms of beds occupied by Covid-19 patients — there could be many hospitals with relatively few Covid-19 patients — while several hospitals, or a particular city or county, may be close to or exceeding capacity.

In Minnesota, for example, as I write this the number of Covid-19 patients is 1,885, and the number of staffed hospital beds is 9,812, suggesting that only 19.2% of beds are filled. However, a deeper dive into Minnesota counties suggests that hospitals in Stearns County had a 66% Covid-19 occupancy while Morrison County had a much lower occupancy at 9%.

The new data release from HHS can identify individual facilities, cities, and regions as hot zones and make it possible to implement strategic plans to target resources accordingly across the nations’ hospital system.

2022 was a breakthrough year for understanding rare diseases. 2023 needs to be better

The tyranny of the inbox: What it’s like to be a PCP with OCD