Public outcry about the shockingly high cost of brand-name drugs and a demand for new laws to rein in the cost of these medicines has persisted for years. But more than 90% of all prescriptions — almost 4 billion a year — are filled with generic drugs.

Little attention has been paid to how much insurance companies, pharmacy benefit managers, and pharmacies charge to fill these generic prescriptions. Yet the difference between the highest and lowest price being charged for the same generic drug is so large that many billions of dollars could be saved each year by having prescriptions filled at the lowest-cost pharmacies.

The entry of companies like Amazon and GoodRx into the business of filling prescriptions is a game changer. They are offering prices far lower than the federal government pays insurance plans to have these prescriptions filled under the Medicare Part D drug benefit. Repealing the current Part D benefit design and replacing it with a system in which the government directly reimburses low-cost pharmacies for filling generic prescriptions would save about $18 billion a year. Patients would save an additional $8 billion in out-of-pocket copayments because the prices these pharmacies charge do not require any form of insurance or any additional co-payment.

Related: A federal appeals court throws into question the fate of ‘skinny labels’ — and access to generic drugs

I compiled information from the Medicare Part D website on how much it spent per pill for the 20 top-selling generic drugs during 2019. I then determined how much Amazon and GoodRx charged for a 90-day prescription for the same 20 drugs and calculated the cost per pill for those prescriptions. For example, Medicare paid 26 cents per tablet for atorvastatin, the generic version of the cholesterol-lowering drug Lipitor. Amazon fills a 90-day prescription for a 20-milligram atorvastatin tablet, the most common dose, for $4.20. That amounts to less than 5 cents per pill. The government paid insurance plans $919 million dollars to dispense 3.6 billion atorvastatin tablets in 2019. Amazon would have dispensed those tablets for $182 million, a savings of $737 million on just one generic drug. 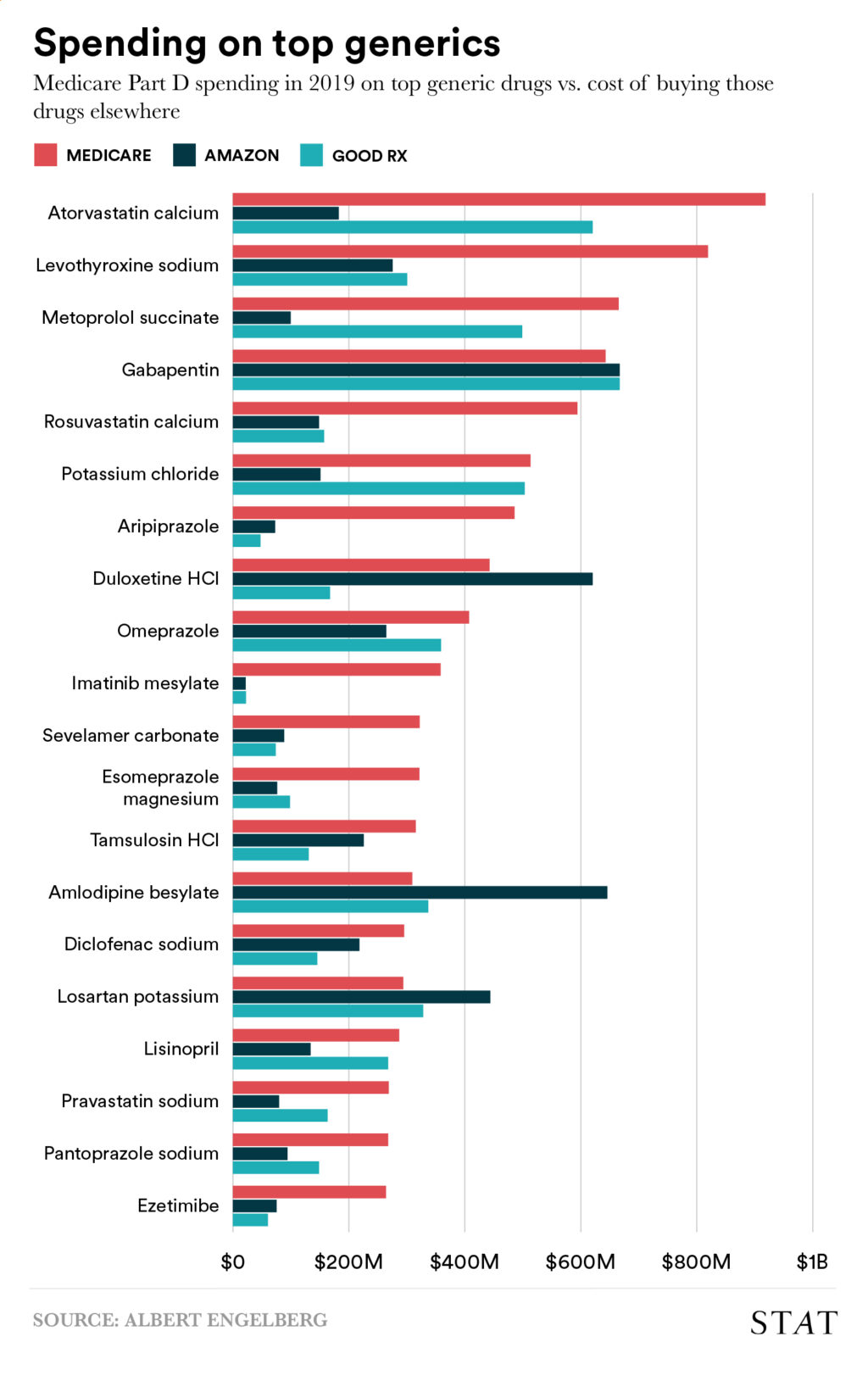 As shown in the table here, Medicare spent $8.8 billion to dispense these 20 generic drugs in 2019. Amazon would have done that for only $4.6 billion, and GoodRx for $5.1 billion. If the prescriptions had been filled by selecting the lowest-cost drug from either Amazon or GoodRx, the cost would have been $3.5 billion. That represents a savings of $5.3 billion (60%) over what Medicare spent.

In 2019, Medicare Part D filled about 1.2 billion generic prescriptions at a total cost of about $30 billion. If the 60% savings applied to all generic drugs dispensed under Part D, the government would have saved $18 billion.

In addition to overcharging the government, Part D insurance plans also charge patients copayments for most generic prescriptions. Iqvia reports that 65% ($8 billion) of the $12 billion in Part D out-of-pocket costs paid by patients are for generic prescriptions. GoodRx estimates that its full price for filling generic prescriptions is less than the Medicare Part D copayment about one-third of the time. The Amazon and GoodRx price is the full price of the drug. There is no copayment. That means patients would save $8 billion in out-of-pocket costs, bringing the total savings from a redesign of the Medicare drug benefit to $26 billion.

How is it possible that the cost of filling generic prescriptions can vary so widely? The answer resides in a lack of transparency about the true cost of generic medicines. The World Health Organization estimates that generic versions of essential medicines can be profitably produced at a 99% discount from the cost of the patented, brand-name medicine. So a patented pill that sells for $1 can be profitably produced and sold as a generic for a penny. In fact, generic manufacturers now sell many of the most widely prescribed generic drugs in the U.S. for 1 cent to 5 cents per pill.

Competition between generic manufacturers assures that these pills are offered for sale at a small profit over the actual cost to produce them. Yet, in a few instances where such competition is lacking, as was the case for the generic version of the EpiPen, the cost of a generic drug may sell at only a small discount from the brand name product.

Insurance plans and pharmacy benefit managers price their generic prescriptions at levels the market will bear rather than at a reasonable markup from the actual cost of acquiring and dispensing the prescription. Patients and payers believe they are getting a bargain when they get a 70% discount and pay 30 cents per pill for the generic version of a branded medicine for which they previously paid $1. They have no idea that the pharmacy acquired that pill for only a penny or two and is marking up each pill by 10 to 20 times its acquisition cost. The high markup imposed by insurance plans and pharmacy benefit managers explains why the government pays 26 cents a pill for atorvastatin while Amazon sells it for 5 cents.

Discount pharmacies like Amazon are disrupting the prescription drug market by pricing their prescriptions on a cost-plus basis while still earning a fair profit. A 90-day prescription for a generic medicine acquired at a cost of 1 cent per pill has an ingredient cost of 90 cents. The average dispensing cost — the pharmacy’s cost for the time spent to count and package the pills, label the pills, comply with laws for keeping prescription records, and record the information required for reimbursement from insurance plans — is about $2.40 per prescription. If a discount pharmacy charges $5.00 for this 90-day prescription, it will earn a $1.70 profit over the actual $3.30 cent cost of the prescription. That amounts to a gross profit of 34%, which compares favorably with the reported profit margins of independent pharmacies.

Medicare should be able to fill generic prescriptions at the lowest price charged for those prescriptions in the competitive retail market. But the 2003 law that created Part D prohibits the government from shopping for the best price and gives private insurance plans exclusive authority to set the price. The Republican administration that championed the enactment of Part D erroneously believed that competition between insurance plans would result in the lowest prices and widest choices for beneficiaries. No such competition ever materialized. Instead, Part D created windfall profits for private insurance plans and pharmacy benefit managers while needlessly adding complexity to the process of filling generic prescriptions. Patients are now faced with an incomprehensible array of formularies, quantity limitations, and copayments that often make it cheaper to pay for a generic drug out-of-pocket than to use Part D insurance.

The current design of the Part D benefit is ill-suited to a world in which discount pharmacies fill generic drug prescriptions at affordable prices without insurance. A new design that eliminates expensive intermediaries and relies on price competition between pharmacies will not only dramatically lower costs in Part D but will also force all pharmacies to lower their profit margins if they hope to compete for the Part D prescriptions that account for 30% of the retail pharmacy business.

Part D prices for generic drugs would quickly become the benchmark for private payers and drive down the prices and copayments for generic drug prescriptions in private insurance plans. The end result would be that more than 90% of all prescriptions could be filled at a lower cost to payers without burdening patients with significant additional out-of-pocket costs.

Senate Democrats are now negotiating a $3.5 trillion-dollar soft infrastructure package that will include legislation to lower patient out-of-pocket costs in Part D and expand Medicare to cover vision, dental, and hearing services by imposing new taxes. My proposal to lower Medicare’s cost of dispensing generic drugs and the Biden administration’s proposal to limit price increases on brand-name drugs could produce enough savings in the cost of current Medicare prescription drug benefits to pay for the proposed expansion of Medicare benefits without such taxes.

Given the rising resistance of moderate Democrats to the $3.5 trillion price tag of the proposed infrastructure package, paying for new benefits by reducing the cost of existing ones may be the wisest path forward.

Alfred Engelberg is a retired intellectual property lawyer and philanthropist who focuses on efforts to make health care and medicines more affordable. As counsel to the generic drug industry, he played a major role in drafting the Hatch-Waxman Act of 1984, which created the modern generic drug industry.

I was laid off from a public health job. Trust me, tech layoffs are different

The FDA is the right agency to regulate CBD products, but it needs help