The first days of summer this year saw Americans jubilant, as Covid-19 cases plummeted across the country. The sentiment morphed to anger as the Delta variant exploded, and as vaccine holdouts prolonged the pain of the pandemic — and then to despair, that even with remarkably protective shots, some communities with low vaccine coverage endured their worst stretches of the crisis.

Now, with trend lines heading in the right direction, we’re moving toward a kind of timid optimism.

There are reasons to allow, at least partially, for an exhale. The Southern states that witnessed horrific summertime waves have seen them subside, after the Delta variant swept through so many of the people who remained susceptible. Nationally, cases have fallen by a third in recent weeks, and have been dropping for enough time that now deaths are coming down. Hospitalizations have declined to below 75,000 for the first time in weeks. All those metrics got so high, however, that they have quite a ways to plunge to reach the levels of June.

But there’s also a sense of having been burned. As the country thought it was safe to roll back mitigation efforts, the super-transmissible Delta variant reared, marring our summer of celebration like a red sock in a load of white laundry. It infiltrated pockets of unprotected people and drove surges anew — threatening other people’s health as it overwhelmed hospitals. It pushed back returns to offices and complicated school openings. Even the rosier outlooks for the future hinge on no worse variant emerging. More broadly, every positive turn of events (take the stellar results from a trial of an oral antiviral treatment last week) is undercut by a devastating one (like the confirmed U.S. death toll crossing 700,000).

“I would not have guessed that we would have had such a high number being hospitalized and dying,” epidemiologist Jason Salemi of the University of South Florida said about his state’s summer wave. “A lot of those would be preventable because we have such effective vaccines.” 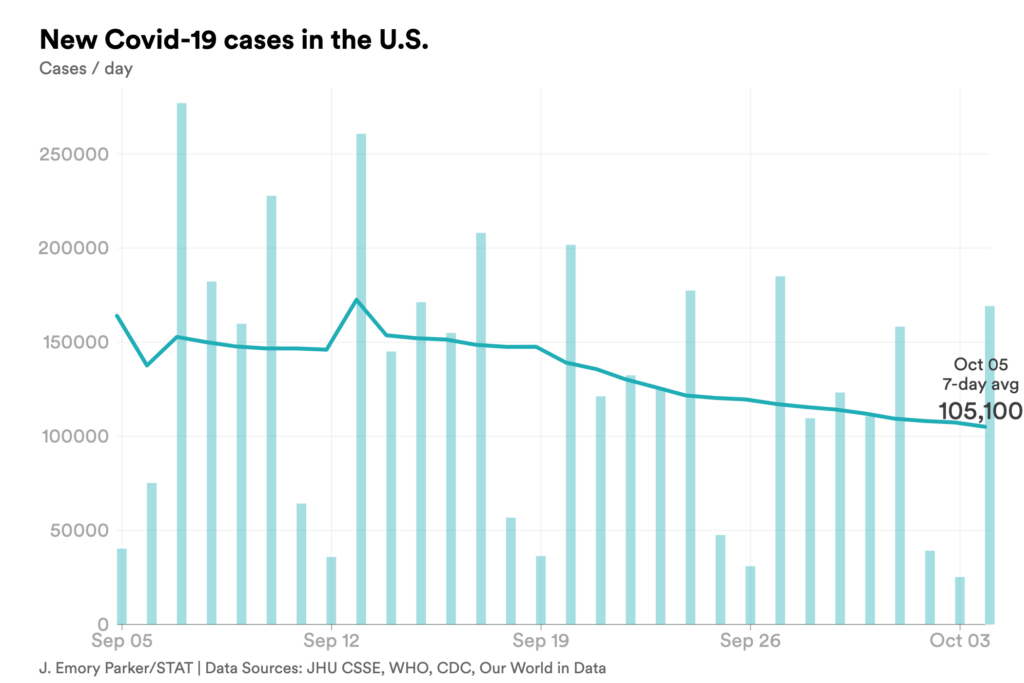 People also remember the horror of last fall and winter and fear a sequel. Summer 2020 was marked by surges in the Southeast — the same states that had even worse spikes in summer 2021. Already, there’s some evidence that the summertime wave in the South is rolling north. In the Mountain West and Alaska, doctors are yet again having to make choices about how to allocate limited resources.

“We don’t want to celebrate even though we feel like we’re on the back end of this surge — we learned our lesson from doing that,” said UCSF epidemiologist and physician Kirsten Bibbins-Domingo, summing up her conversations with others. The worst is behind us, health leaders stress, but “in this pandemic, you’re always waiting for the other shoe to drop.”

Related: Winter is coming, again: What to expect from Covid-19 as the season looms

There is no one national mood to sum up, of course — no universal anxiety out there about Covid-19’s next act. Plenty of people have long dismissed the pandemic or pretended that the SARS-CoV-2 virus didn’t exist. Lots of people did their part, and once they got vaccinated, moved on.

And indeed, many experts remain heartened about the fall and winter, or at least something like it. Between vaccine-elicited protection and all the people who’ve recovered from Covid-19, a big wall of population immunity should act as a buffer against waves resembling anything like last winter, they say (again, as long as nature doesn’t spit out some new variant). In many places, schools have opened without igniting major outbreaks. Communities with low levels of protection will still be vulnerable, but those should be smaller and fewer and farther in between. Well-protected places are seeing, and could once again see, increases in cases, but they’ll be more manageable.

A test will be in places like New England, which has some of the highest vaccination rates in the country. But as the weather cools, how well will the 70% vaccination coverage in those states, plus whatever immunity exists from infections, blunt the Delta variant?

Some epidemiologists think the U.S. could be in for one more sizable — if not as massive — winter wave.

But with such a fractured landscape around the country in terms of vaccine coverage and in willingness to keep up with minimal mitigation efforts like indoor masking, experts say it’s more difficult to make predictions about where things could go. The gulf in Covid-19 death rates between metropolitan and rural areas has widened since the summer, and now people in rural areas are dying at twice the clip as people in cities, according to data analyzed by the University of Iowa. Going forward, the situation will be worse in places with lower vaccination rates — particularly if they have lower vaccine uptake among older adults — but surges going forward could be ever more geographically isolated. Still, some 70 million eligible Americans remain unvaccinated (though some percentage is protected from having had Covid-19), and children under 12 still can’t get vaccinated yet.

“It is becoming clearer that any challenge to hospital capacity this fall and winter is likely to be dictated by regional vaccination rates,” modelers at the Children’s Hospital of Philadelphia’s PolicyLab wrote in their forecast last week. 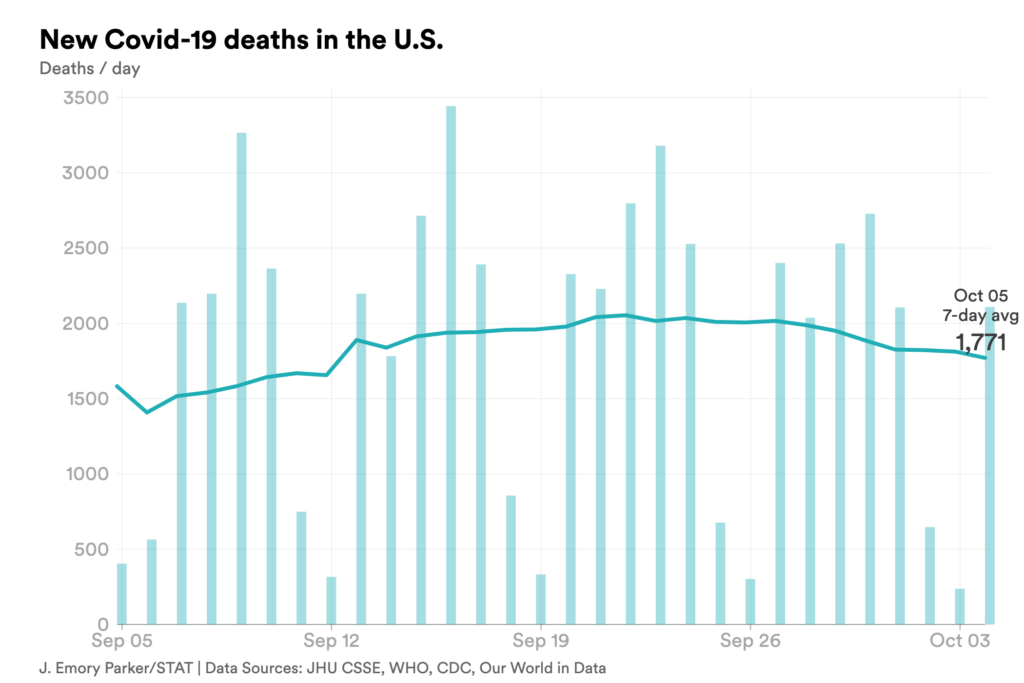 But they added that even places with low vaccination rates are beginning to see hospitalizations plateau.

“This would suggest that population immunity, both from infection and vaccination, is helping to blunt the frequency of adult infections that require hospitalization,” they said.

To some experts, it feels as if this country is reaching an inflection point — a slow exit from an epidemic phase and a gradual entry into the endemic phase, when the virus will still circulate, and will still cause a certain level of disease, disability, and death, but at levels society tolerates.

“Are we transitioning into a world where we live with Covid?” is a question epidemiologist Stephen Kissler of Harvard’s T.H. Chan School of Public Health said he has been getting more recently. “We’ve still got a little work left to do, but my hope is that we’re approaching something ever closer to normalcy.”

It won’t necessarily be a smooth realignment, and will look different in different places, with colliding views on what amount of risk is acceptable when. Some European countries with exceptionally high vaccination rates have already lifted all restrictions. Countries like New Zealand or Singapore that successfully kept SARS-2 out for so long could face a more complicated adjustment. The shift could require us to think differently about Covid: Some people who are vaccinated will still get ill, but instead of winding up in the hospital, they’ll miss work for a few days. (Notably, countries with limited vaccine supplies are not yet in this position.)

“That’s a tough transition I think for people,” said Columbia’s El-Sadr. “What I hear is that there’s been this incredible hope that there’d be this one day — like December 12, I don’t know — when this is over, and that’s unlikely, so the question is how do we all collectively realize that we’re going to have to be willing to accept the fact that there will be transmission, and we want to keep transmission to a minimum, but at the same time be comforted by the low number of hospitalizations and deaths from this virus.”

Trending Now: The drug was meant to save children’s lives. Instead, they’re dying

It’s not just geography that is defining our pandemic experiences. Some of us have been able to move on more than others.

Jessi Gold, a psychiatrist at Washington University in St. Louis, specializes in both students and health care workers. College students are still facing some restrictions or rules that change depending on the conditions, but they’re back to as normal of an experience as they’ve had in more than a year and a half. “In a lot of ways, they’re feeling like, ‘Oh, this is what college is supposed to be,’” Gold said.

It’s not the same for health care workers.

“The predominant emotion is really anger to numbness,” Gold said. “It’s been hard, it continues to be hard, but what is probably most frustrating is that a lot of what’s going on now didn’t necessarily have to be the case, and that leads to a lot of anger.”

“People want to, and they will, take care of whoever comes in,” she continued. “But it’s really hard to know that the people who are coming in, they could not be sick if they just did one thing.”

“I’ve never heard as many people as I have lately talk about not staying in medicine.”

Andrew Joseph covers a range of topics, from addiction to public health to genetics.

No longer invisible: The faces of rare disease