For the last four days, New York has posted all-time record case numbers of Covid-19. On Monday, the Centers for Disease Control and Prevention released a new forecast that estimates that the Omicron variant is already the dominant variant in the U.S. Meanwhile, cases have been climbing in the Northeast and Midwest for the last several weeks. The nation’s Delta wave isn’t over and an Omicron wave has just begun. Here’s where things stand.

On Monday evening, the CDC posted updated variant surveillance data to its website that included what are called “Nowcast” estimates of variant proportions. Those estimates indicate that the Omicron variant became the most common variant in the nation by the end of last week. 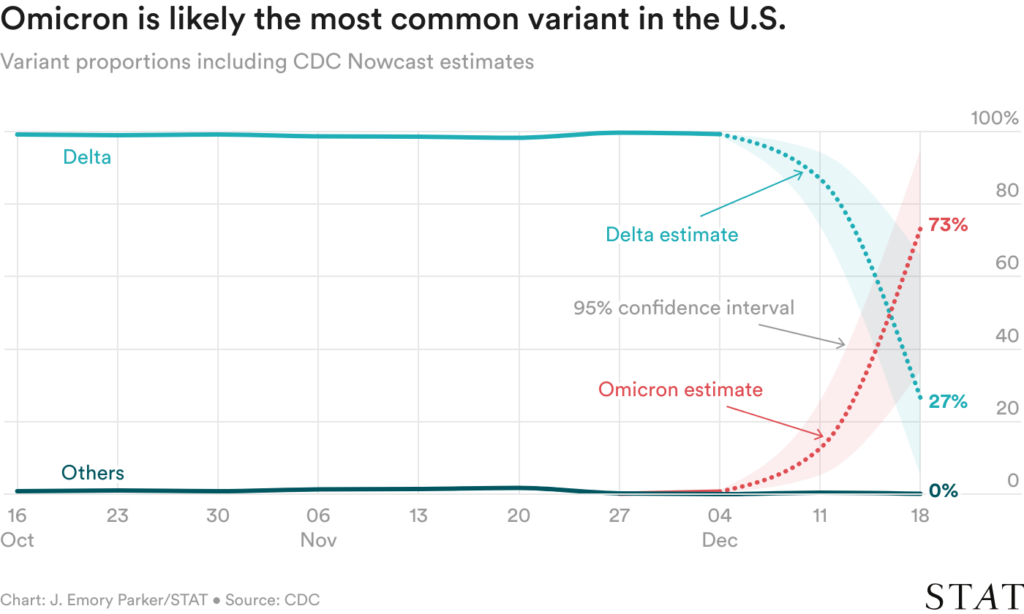 It is important to note that the numbers for the last two weeks are forecasts based on models and these numbers come with fairly large error margins. As is always the case with any kind of forecast, the real numbers that come in over the next few weeks will differ from these estimates.

Still, comparing these forecasts with the limited real-world data collected so far in countries where Omicron was discovered earlier shows that the CDC estimates are at least comparable. 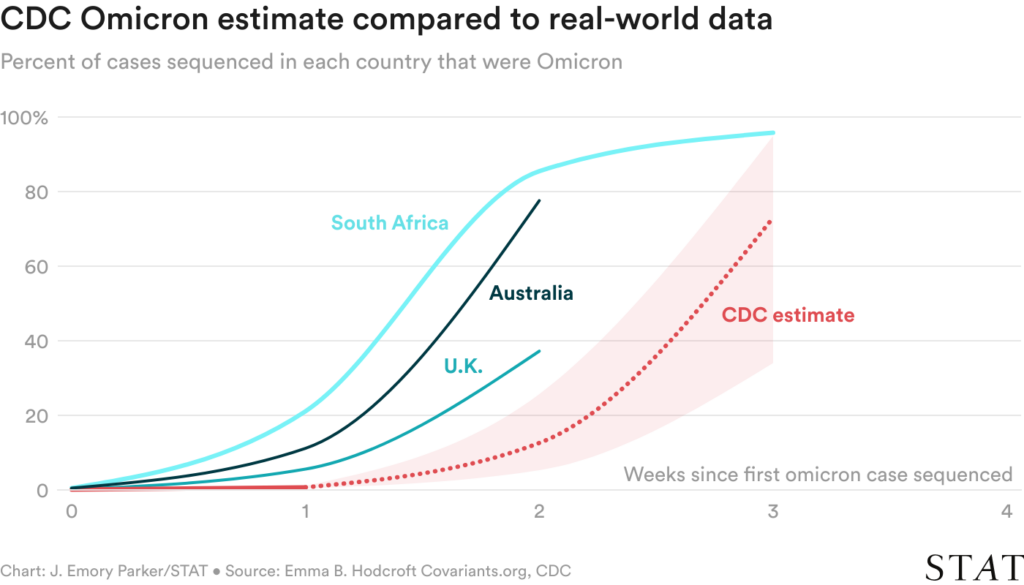 Cases are on the rise

Broadly speaking, there are two different emerging stories in new case data. Here is a heat map visualizing the history of the pandemic so far. Each row is one state or territory (plus New York City). Each block represents a two-week chunk of time. The color represents how many new cases were reported over two weeks in that area. At the top is the national total. The rows are sorted by geography, roughly west to east, to make regional trends easier to see. 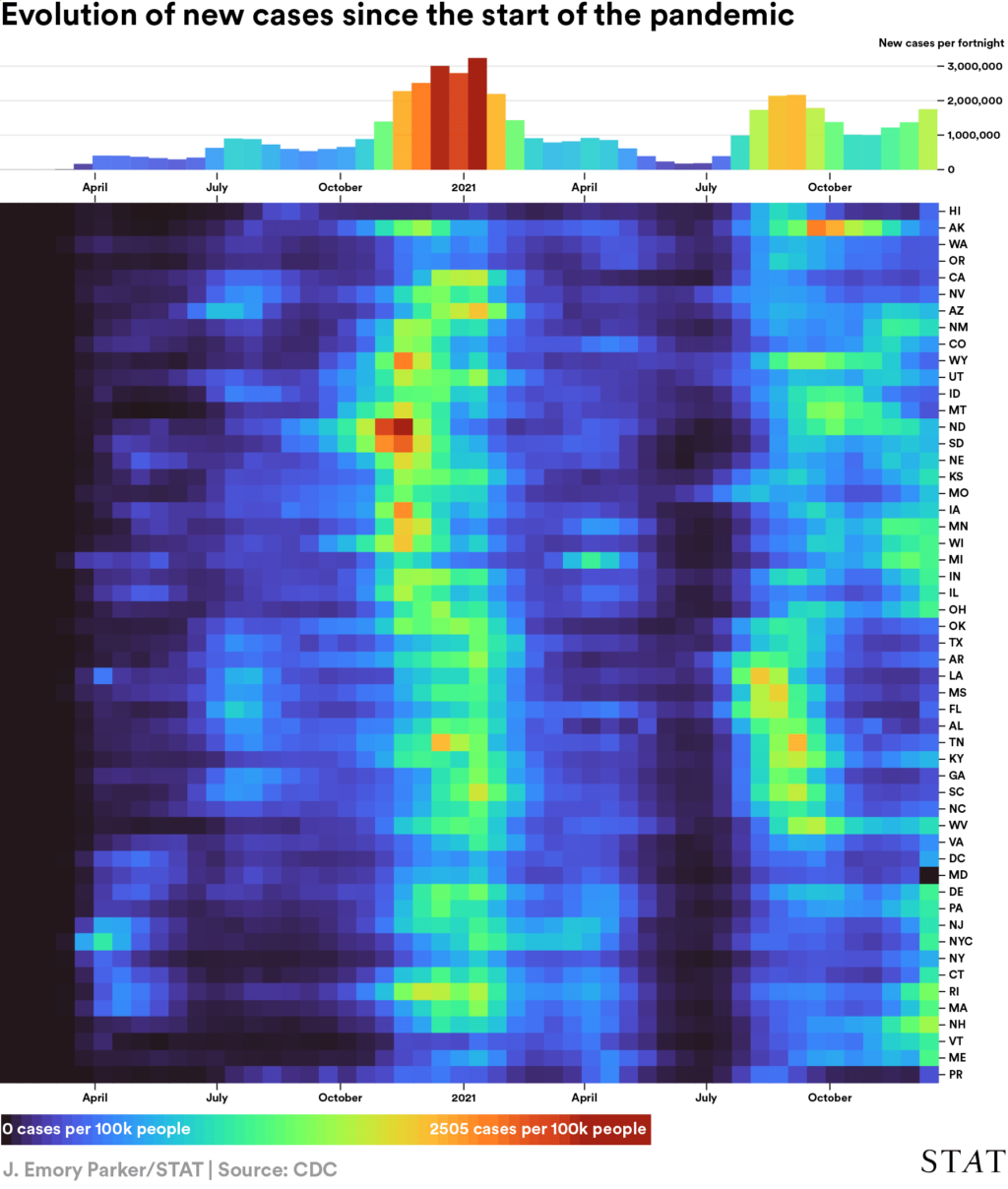 Looking at cases this way makes it easier to see where different waves occurred and how they spread and varied over time. At the right is the most recent data; they show that cases have been on the rise for several weeks now in New England and in parts of the Midwest. These increases significantly predate the discovery of the Omicron variant and so are likely driven by Delta.

Meanwhile, in the last two weeks there has been a sharp increase in cases in and around New York, likely driven by Omicron. The speed of these increases has been stunning. Cases in New York are now accelerating faster than at any point since the start of the pandemic. 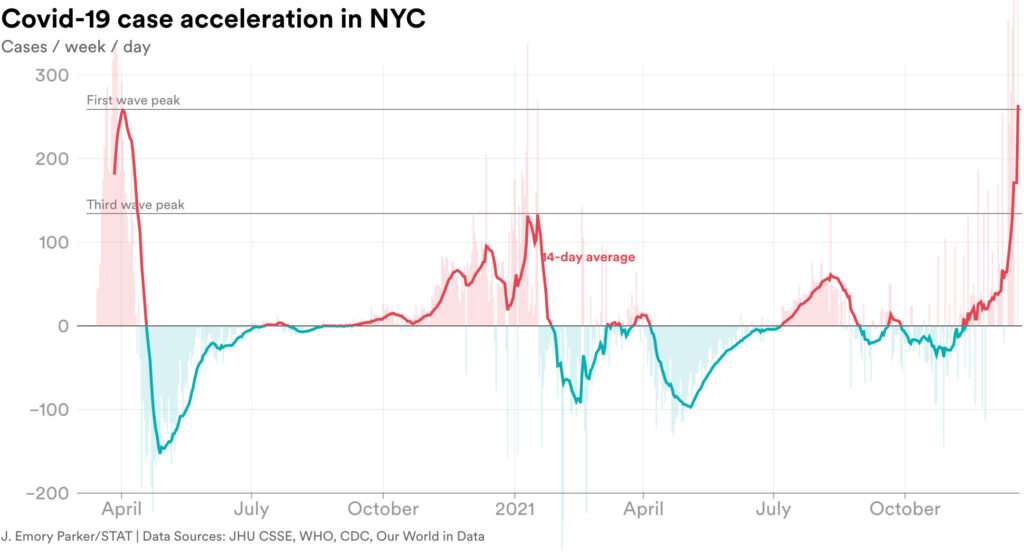 For context, this kind of case acceleration is comparable to the peaks set by states like Louisiana and Florida when they were hard hit by the Delta wave in late summer/early fall.

Since August of this year there has been a pretty stable relationship between case rates and vaccination rates, with the most highly vaccinated states tending to have the lowest new case counts. Starting in December this correlation has become much weaker. 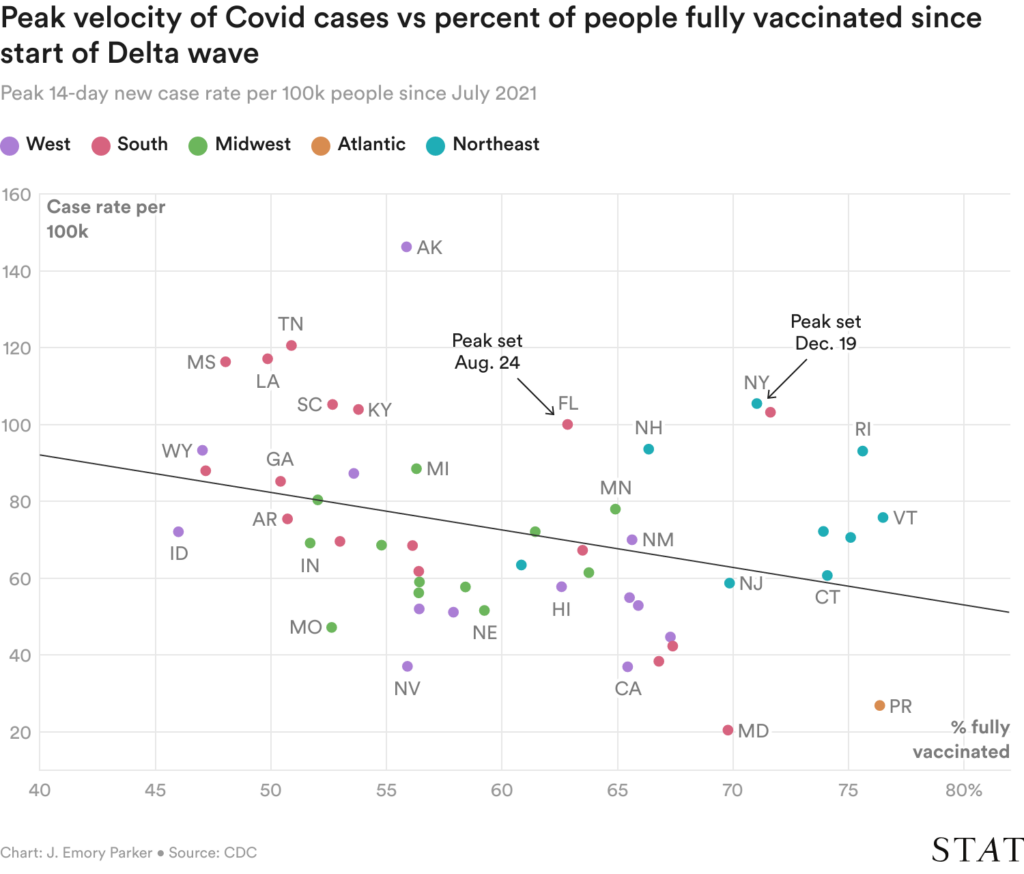 This may reflect waning immunity from older vaccinations, increasing spread of the Omicron variant, or perhaps simply vaccine data collection problems. Importantly, the definition of “fully vaccinated” used here does not include booster shots, which are known to be important in maintaining effective immunity against Omicron.

Hospitalizations are rising, but not as quickly (so far)

Similar to the visualization above, here is the history of hospitalization rates by state or territory since last fall. 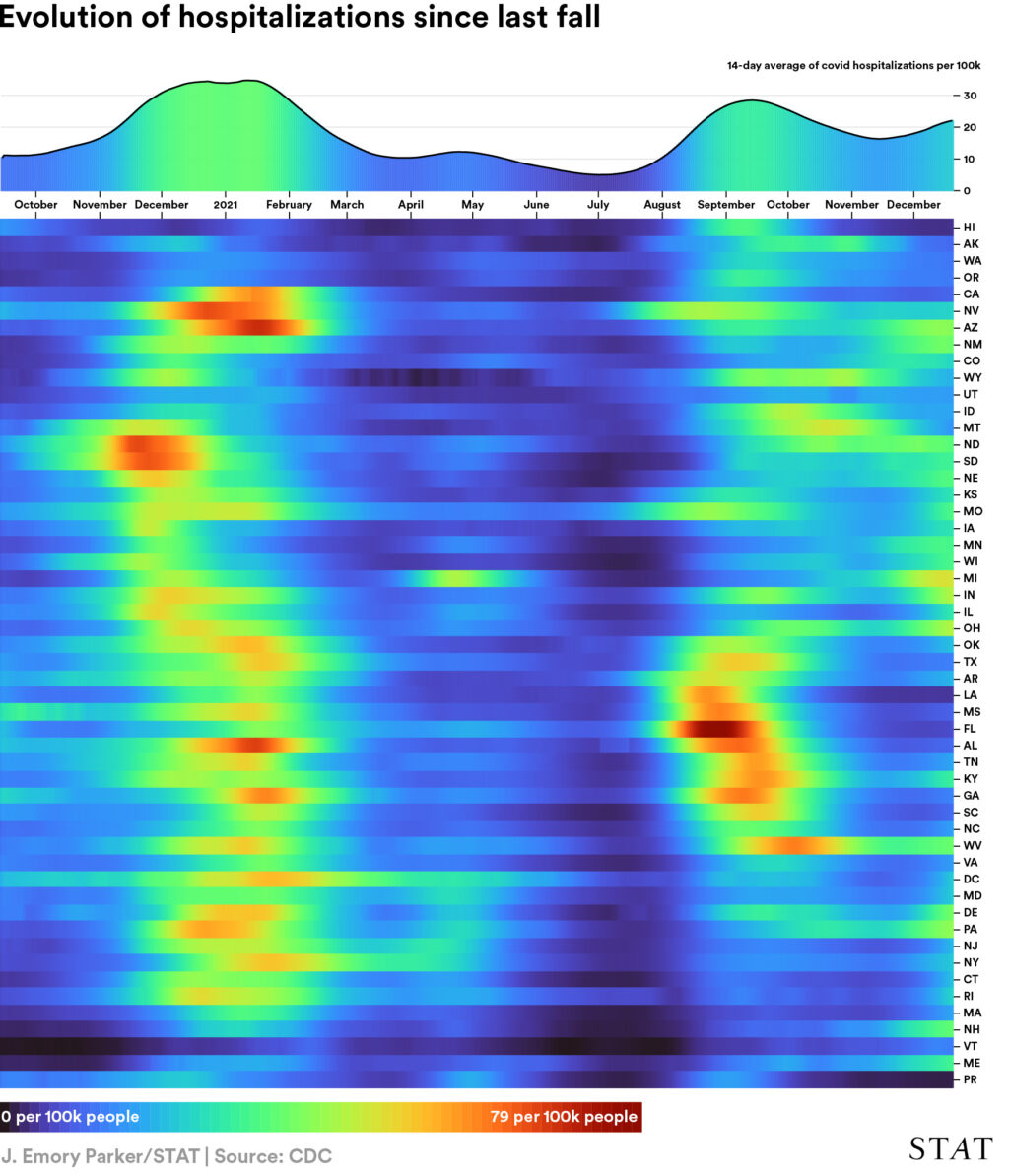 What is promising here, at least so far, is that recent increases in hospitalization rates, especially in the Northeast, have been more modest than corresponding case increases. It is important to note here that hospitalizations tend to lag behind new case reports, so this picture could change.

It could be the case that high vaccination rates in the Northeast may be contributing to lower rates of hospitalizations, which is consistent with data showing that hospitalizations are much higher nationwide for the unvaccinated. 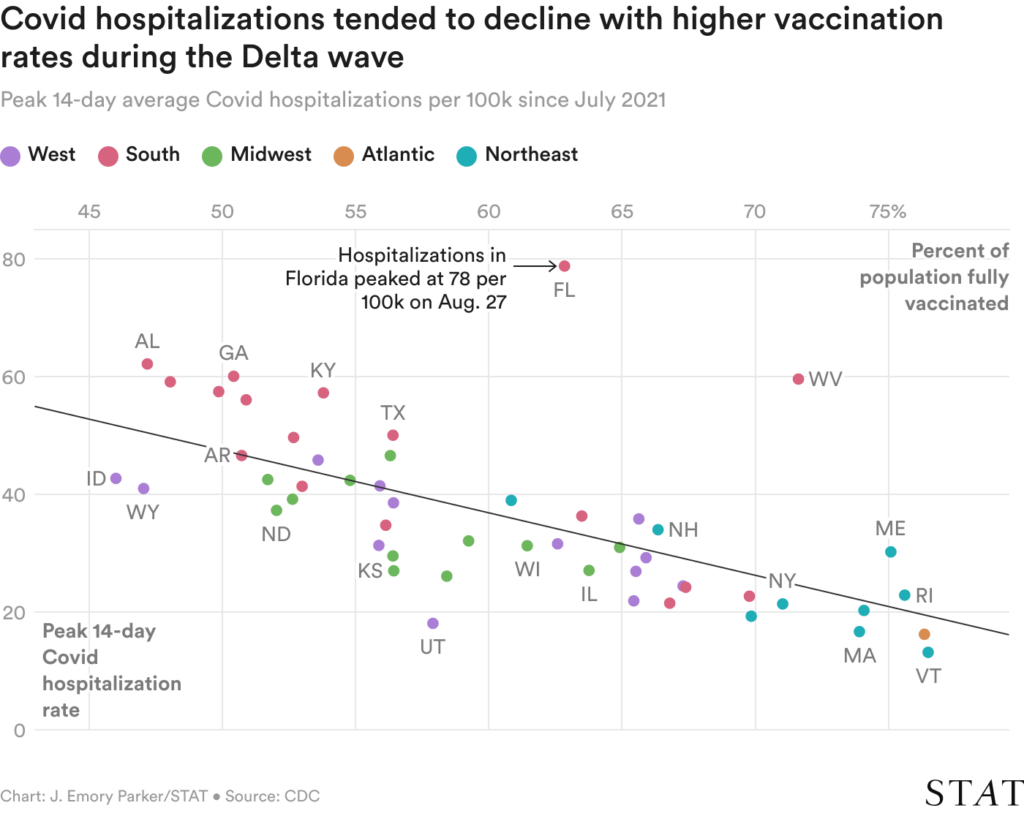 Tracking the bird flu, experts see a familiar threat — and a virus whose course is hard to predict

Pregnant people with substance use disorders need treatment, not criminalization

STAT Plus: Leading ALS advocacy group roiled by infighting over money and priorities