You’re reading the web edition of STAT Health Tech, our guide to how tech is transforming the life sciences. Sign up to get this newsletter delivered in your inbox every Tuesday and Thursday.

A handful of virtual care companies are inking new types of contracts that reward them for keeping patients’ cost low and penalize them for overspending — a model known as risk-sharing. It’s a departure from the traditional “fee-for-service” billing process, and a move  companies hope could help them get paid for the services they offer in addition to virtual doctors’ appointments, like in-app messaging, medication reminders, and digital health coaching. They’re also betting that embracing risk could endear them to the health plans and employers they depend on for contracts.

Execs from companies like Heartbeat Health and Teladoc say they’re in the very early stages of cementing these contracts. While there’s no clear roadmap for how to structure them, whether they take hold could clarify how virtual care will fit into the brick-and-mortar healthcare system and incentivize those companies to work with traditional providers on prevention, said Jennifer Goldsack, CEO of the Digital Medicine Society. “There is an opportunity to reimagine what health care looks like when it is around the patient,” she told Mohana. Read the full story.

The case for scaling primary care

Closely watched upstarts hawking higher-tech health care are in a fierce battle with retail giants and tech companies to determine the future of primary care. And as they make the rounds at conferences like JP Morgan, they’re out to convince investors that primary care — which has historically been underfunded — is scalable and worth backing. Medicare-focused startup Oak Street Health plans to open 70 more locations this year; One Medical expects to reach 28 markets soon. And other players including Walmart, CVS, and Amazon are ramping up their own efforts. But the companies have also faced headwinds, including a DOJ inquiry into Oak Street’s potential False Claims Act violations. Casey has the story.

The promise of neurostimulation

Brain stimulation is booming. This expanding field of research is slowly revealing truths of the brain: how it works, how it malfunctions, and how electrical impulses, precisely targeted and controlled, might be used to treat psychiatric and neurological disorders. Researchers are looking into how different forms of neuromodulation affect addiction, depression, chronic pain, obsessive compulsive disorder, and more. Still, the field is in its infancy, and many hurdles to treatment remain. STAT’s Isabella Cueto has the whole story.

Yes, it was a lot of money 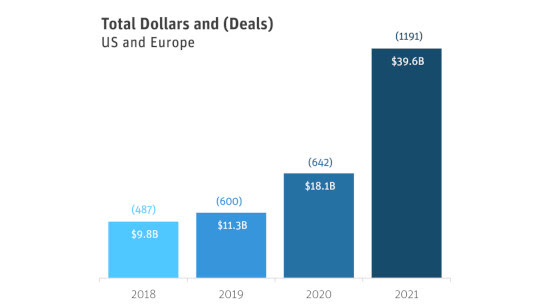 This is the chart we all saw coming, we just finally know what it says, courtesy of Silicon Valley Bank’s annual Healthcare Investments & Exits report. Health tech investment in 2021 more than doubled, with 60% of funding coming from mega rounds. Early stage investment also increased from $2.2 billion in 2020 to $3.5 billion in 2021. Despite these impressive numbers overall, SVB sees some indications that things may cool off: It expects venture capital fundraising will drop to $16 billion across health care in 2022 from its impressive $28 billion last year.

What the research says about AI and quality assurance

AI and machine learning promise widespread benefits in health care, but there’s no comprehensive framework for how to safely and responsibly introduce the technology, a group of researchers write in a new literature review in Nature’s NPJ Digital Medicine.

Their analysis finds that there’s an abundance of guidance about data preparation, but less about software development and how to assess impact and implementation. Their review could serve as the basis for such a framework, though they noted significant gaps in academic research about quality assessment in the later phases of predictive model development.

Today at JPM we’ll be watching presentations from Talkspace, Color, and GoodRx. Here’s what’s happened in tech at the conference since we last talked:

Mohana Ravindranath is a health tech correspondent at STAT.

By Katie Palmer and Casey Ross

With its Alzheimer’s drug in turmoil, Biogen eyes a list of potential acquisitions

Telehealth companies are testing the waters with taking on more risk

In a battle over the future of U.S. health care, a question emerges: Is primary care scalable?