Officially, the U.S. will almost certainly reach an awful milestone in the next two weeks: its one millionth recorded Covid-19 death.

In reality, this milestone was likely unofficially crossed days or weeks ago, and we’ll never know the exact toll or the identity of the pandemic’s actual millionth victim. Nor are humans well-equipped to fully grasp loss on this scale, let alone the magnitude of a global toll estimated to be as high as 14.9 million.

One way to start understanding how a country as advanced as the U.S. lost so many people is to look at the ocean of public health data that was gathered as 1 million individual tragedies rippled through civic life.

Analysis of the data will continue for years, but it is clear that, when it comes to deadliness, there were five different pandemics — depending on when and where you lived, and who you were.

The first place in America to bear the full brunt of the pandemic was New York City. The early weeks of April 2020 in New York were uniquely deadly, peaking at a rate of around 63 deaths per 100,000 people in one week. Nowhere else has seen a weekly rate this high since.

Evolution of Covid deaths since the start of the pandemic 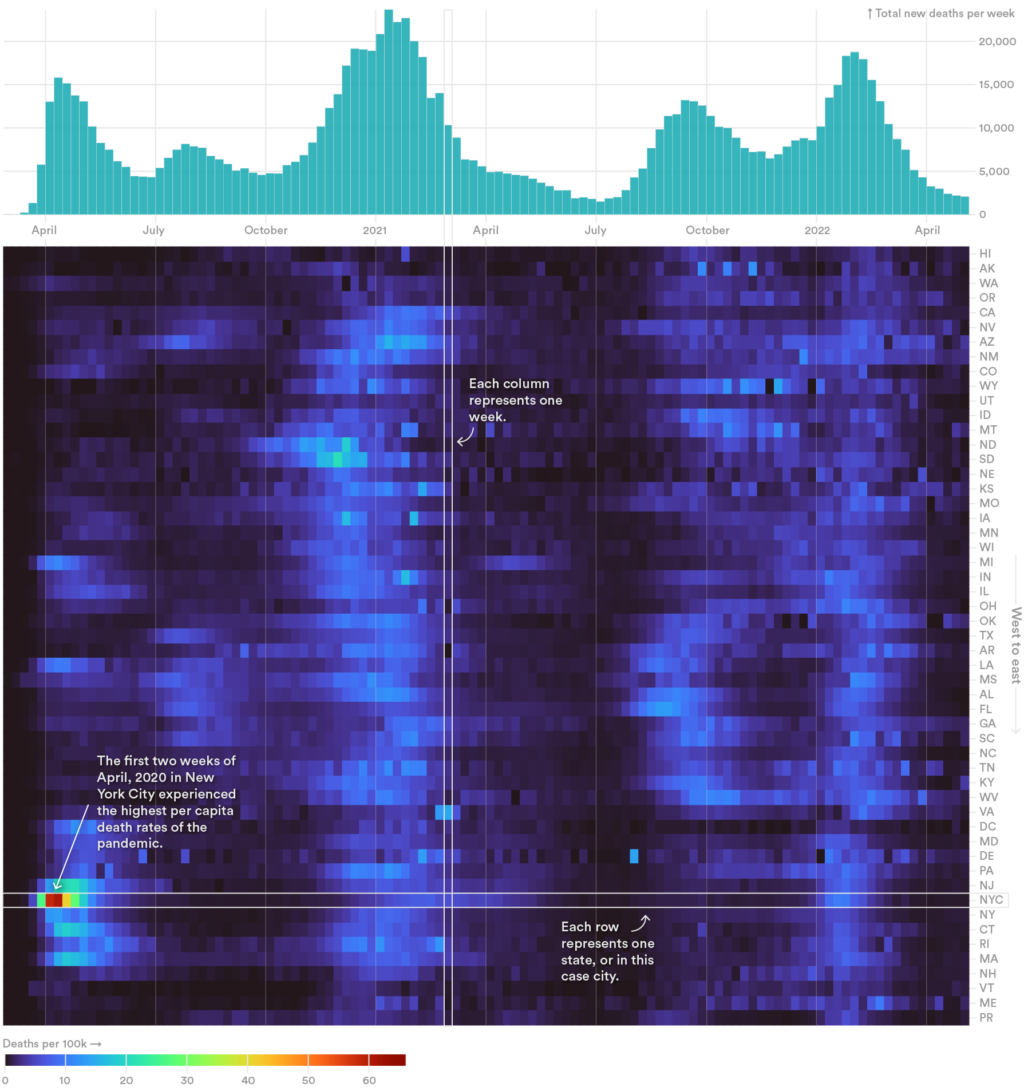 After this initial onslaught, significant progress was made in improving care for Covid patients, thanks both to more knowledge about the disease and the availability of new treatments. Effective vaccines became available and the number of people who acquired some natural immunity by contracting the virus increased as well. Over the last two years, a smaller share of people who became ill from Covid have been dying from it.

The discussion about the “decoupling” of death and hospitalization rates from case rates, which began as vaccines arrived, intensified as the Omicron variant spread across the country. Reflected in the chart above, the ratio of deaths to cases did drop as Omicron cases reached their zenith this past January. It is important to recognize, however, that a very large number of people contracted Omicron and when that number is so large the absolute number of deaths will also be large despite the lower ratio. The Omicron wave saw some of the deadliest weeks in the entire course of the pandemic. Nationwide, the only time when more deaths were being recorded was the beginning of 2021.

Americans of all ages have been affected by Covid, but the majority of Americans who have died from Covid were those over 65 years old.

This statistic, though, obscures the serious risks the virus poses to younger people, who tend to die at much lower rates in the first place. In 2021, for people as young as 15-24, Covid emerged as the fourth leading cause of death, below suicide and above malignant cancers, according to preliminary data for the year published by the CDC. For people aged 25-44, Covid was the second leading cause of death. For those aged 45-54, Covid was the No. 1 cause of death last year.

The emergence of Omicron, coupled with waning immunity, has meant that a greater share of deaths have occurred among the vaccinated in recent months. January of 2022 was the deadliest month for vaccinated individuals since the vaccines became widely available, but the risk of death for the vaccinated continues to remain substantially lower than for the unvaccinated.

The beginning of the pandemic hit not only New York, but other big American cities hard. By August 2020 average death rates in non-metropolitan counties surpassed those of metropolitan ones. By December a higher per-capita share of people had died in rural counties than in urban ones. Since then, the gap has widened and rural county death rates have consistently remained higher.

Several factors may help explain this. At the beginning of the pandemic, Covid spread rapidly in densely populated areas and treatment options were limited. By the end of 2020, the overall death rate had already dropped significantly, due in part to better treatment availability and quality of care. Mortality rates for patients hospitalized for Covid declined from 22% in March 2020 to 14% in December 2020.

Access to hospitals can be more challenging for residents of rural counties. Nineteen rural hospitals closed in 2020, more than any other year on record. Rural hospitals that remained open often struggled to meet unprecedented healthcare demand with limited resources.

Another factor that may contribute to this disparity in deaths is the higher rate of vaccination in metropolitan counties. At the start of 2021, when vaccine availability was low and restricted to at-risk groups, the rates between urban and rural areas were about the same. After vaccines were approved for all adults and became more widely available that spring, residents of metropolitan counties became more likely to get vaccinated.

These five patterns show how SARS-CoV-2 exacted a toll few could have imagined in the spring of 2020. The why of one million is a story of both scientific achievement which saved some lives and of systemic failures which cost far too many. Of heroism and sacrifice beset by distrust and partisanship. Of collective action weighed against individual risk and responsibility.

Important questions about Covid remain unanswered, but it is clear that we have entered a new phase of pandemic response characterized by a greater tolerance of risk and a greater desire to return to a sense of normalcy. The pandemic will settle into new patterns of harm, with inequities cast into even sharper relief. People with existing health complications, older people, and people who already face the challenges of economic and social vulnerability are poised to bear the brunt of society’s increased risk tolerance.

Whether or not we are done with the virus, it seems the virus will do its best to stay with us.