Over the past four months, my colleagues and I pored over the filings of roughly 300 of the largest health care companies to give you the most accurate, comprehensive picture of what top executives made in 2021, the second year of the ravaging pandemic. There were a lot of massive pay packages, but none was bigger than the $453 million haul by Regeneron Pharmaceuticals CEO Leonard Schleifer. That’s the equivalent of almost 100 private business jets.

The analysis focused on publicly traded companies (we can get new, crisp images of distant galaxies, but we apparently can’t have an up-to-date central database of tax filings for nonprofit hospitals and insurers). Some of the main findings: CEOs made an average of $15.3 million last year, while the median was around $7 million. Importantly, more than 80% of the overall group’s compensation came from the actual realized gains of stock awards and options.

Compensation stories are more than gawking at the wealth of powerful people. They are a reminder of the incentives of the health care system, the end game for attaining that wealth: Sell more drugs, open more facilities, perform more procedures, adopt more technology, document more medical codes, raise more prices, conduct more mergers — do more, often in service of the stock price.

Dive into the main story, which includes a handful of data graphics, and sidebars on the highest-paid CEOs in pharma, providers and insurance, health tech, and medical devices.

Publicly traded companies also have to report the median salaries of their employees, and it pays to be in biotech, unless you’re someone who cleans the lab.

People who work at biotechs, life sciences firms, and pharmaceutical companies pull in the largest paychecks of anyone in health care — usually more than $100,000 per year, and frequently above $250,000. But people who work at providers — especially those who care for vulnerable patients in nursing homes, hospices, assisted-living centers, and home care — continue to make the industry’s lowest wages. Some companies that make medical products and equipment also rely on cheap foreign labor.

Even with high overall industry pay, health care CEOs often make at least 100 times what the average worker gets. Read more, and explore the median employee pay data on your own.

Insurers get taken to court over controversial wilderness therapy

Prepare to go down the rabbit hole of wilderness therapy, courtesy of Tara, who learned about dozens of lawsuits against health insurers that didn’t pay for it.

Wilderness therapy involves guides and therapists taking kids with behavioral health issues into the woods for weeks or months at a time, where they get a mix of traditional psychotherapy and outdoor skills training. It’s very polarizing, to say the least.

Supporters say it’s a last resort that has helped adolescents and is much safer and evidence-based today than decades ago. Detractors — some of whom were taken against their will in a practice known as “gooning” — describe lasting trauma, and a long, sordid history that includes kids dying in unregulated programs.

Insurers often exclude wilderness therapy from coverage, saying it’s experimental or unproven. But some parents have pushed back, arguing insurers are skirting federal law for mental health coverage. Read the rest of Tara’s feature to understand why “the deck is stacked against the claimants” and the nuances of this therapy.

Witty and Rex apparently were referencing a 2021 report from the actuarial firm Milliman. But based on longstanding analyses from the Medicare Payment Advisory Commission, and even based on the Milliman report itself, UnitedHealth’s claims don’t hold water. (Hint: Medicare Advantage sure looks better if you don’t fully account for the Wild West that is risk adjustment.)

The claims from UnitedHealth — the largest Medicare Advantage insurer in the country — highlight how the industry has made a more concerted and sometimes misleading messaging campaign over the past few years to extol Medicare Advantage while neglecting to mention the program’s flaws, tradeoffs, and fine print. Read more about this particular report. 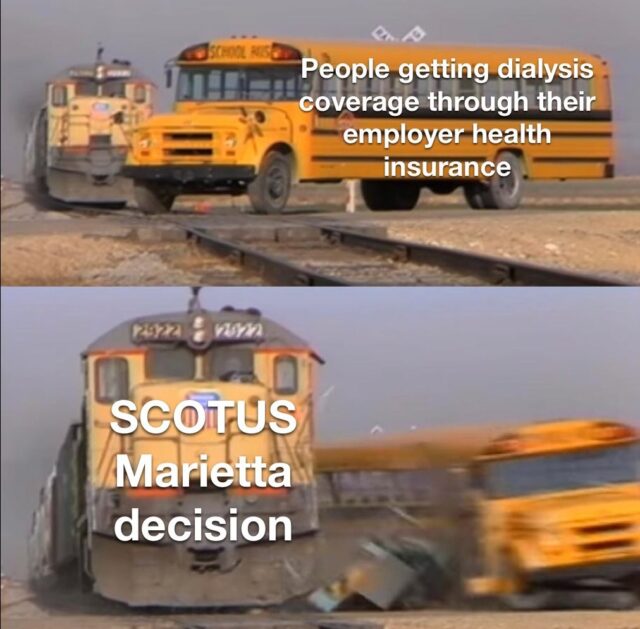 Memes help make sense of everything. Every week, I’ll make one here in the meme ward. Let me know what you think, and I encourage you to make and submit your own. Hat tip to Nikhil Krishnan, author of the Out-Of-Pocket newsletter who is a master of health care memes and inspires me to meme better.