A different way for physicians to get recertified

Doctors dislike renewing their specialty certifications, also known as “maintenance of certification” in industry jargon. They say the traditional boards they have to go through require irrelevant tests, have too many hoops, and are too expensive. But a new competitor is gaining a lot of traction, Tara reports.

The National Board of Physicians and Surgeons has the backing of some prominent doctors like Eric Topol, costs at least half as much as mainstream boards, and runs a lean operation. Instead of mandating tests, it requires doctors to complete continuing medical education and other activities to prove they still know their stuff. Importantly, the group cleared a significant milestone in July, when the Joint Commission said NBPAS is qualified to verify credentials.

The next big step for NBPAS is persuading more hospitals to accept its recertification for medical staff. Just 157 hospitals have done that so far, and many of the prestigious academic hospitals aren’t keen on joining. Read Tara’s story, which provides more details about NBPAS and explains why a major incumbent board still has an upper hand.

Medicare is expected to pay more than $86 billion next year for care given in hospital outpatient clinics and surgery centers, and certain niches of the industry are hoping to shovel more of that money toward their devices and services.

Medical device executives, lobbyists, and physicians made pitches to Medicare officials and independent experts last week during a meeting held by what’s known as the Advisory Panel on Hospital Outpatient Payment. They were hoping to persuade the federal agency to dole out higher payments for numerous types of devices and services, ranging from drugs that get inserted into the eye to hernia repairs.

Read the story, which highlights presentations that came from companies and people who had undisclosed conflicts of interests or revolving-door relationships.

Now that the federal government has laid out how doctors, hospitals, insurers, and other health care players should proceed in the surprise billing law’s arbitration process, the most pressing next step is determining what happens to all those lawsuits that hinge on that updated process.

So far, mum’s the word. STAT reached out to the plaintiffs of all eight pending lawsuits. None elaborated what their next steps would be, despite months of lobbying and, presumably, internal planning of what they would do based on the final rule. The closest thing to a development: A meeting took place in court last Thursday in the lawsuit led by the Association of Air Medical Services, and the parties in that case scheduled another meeting Sept. 21.

Chris Eastlee, a lobbyist with AAMS, said the group has “made no decisions on the lawsuit” and is “still analyzing the rule and its impact.” The American Medical Association, which filed a joint lawsuit with the American Hospital Association in December, also said it is still reviewing the rule, and “we’ll need to hold off on comments until the review is complete.” The AHA did not respond. The American College of Emergency Physicians said it still has “some concerns” and is evaluating “the merits of moving forward.” The remaining plaintiffs either did not respond or said they are still determining what to do.

One thing is clear amid the legal limbo: The process has been a free-for-all so far, and there’s no assurances the final rule will make it any better in the near term. In just four months, between April 15 and Aug. 11, providers and insurers initiated more than 46,000 disputes — “substantially more” than the government thought there would be in an entire year, according to a federal update released last week. Arbiters have resolved just 1,200, or 3%, of the disputes. Job security is looking good for medical dispute reviewers and consultants.

If you’re in the mood to read a gripping, bureaucratic throwdown, this one’s for you: The watchdogs at the HHS Office of Inspector General last week released a 75-page audit report of a Medicare Advantage plan owned by Cigna. OIG looked at an older sample of members in one of Cigna’s MA contracts and concluded Cigna has to repay $39,612 for overcoding problems in that sample.

It’s a paltry amount for Cigna — a rounding error on a rounding error. But the report is a window into how controversial MA coding is and how contentious these types of audits are. There’s also a very notable nugget buried on page 62: OIG originally ordered Cigna to repay $10 million because the agency extrapolated the overpayments from its sample across the entire contract.

Cigna fired back, particularly against the use of extrapolation, and OIG ultimately laid off. OIG said it relented not because Cigna whined about the extrapolation, but because “Cigna applied additional information” for some of the unvalidated medical codes, which were then validated.

It’s worth noting Cigna has a very checkered history within Medicare Advantage. The government suspended Cigna’s MA enrollment in 2016 after finding a slew of “long-standing” problems, like inappropriately denying care and drugs to its members. More recently, this past February and March, CMS slapped Cigna with two separate fines, totaling $200,000, because its MA plans charged some patients the wrong coinsurance amounts and, again, inappropriately denied care. 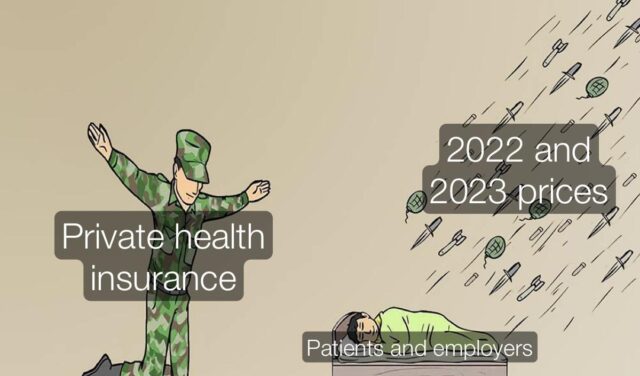