The latest in the Medicare Advantage Discourse™

We are at the point in the Medicare Advantage Discourse where health insurers have convinced themselves, and are continuing to try to convince the public, that MA saves taxpayers oodles of money. The verdict from experts on this extremely in-the-weeds issue: Don’t buy it.

The latest exhibit comes from America’s Health Insurance Plans, which released a report last week that was conducted by actuaries at Wakely Consulting Group. AHIP claims the report proves Medicare Advantage — the controversial alternative to original Medicare that has become a cash cow for insurers — is “saving Americans billions of dollars every year.” The actuaries, however, never use that language in the report.

STAT spoke with several independent Medicare policy experts, all of whom said AHIP’s report was incomplete at best and refuted by other studies that analyzed the same data. Analysts also stressed the federal government certainly isn’t reaping any savings from Medicare Advantage.

Read the story to hear the details and rebuttals about the report’s two central items: MA’s out-of-pocket cap, and comparing the spending of MA enrollees only with traditional Medicare enrollees who are eligible for Medicare Advantage.

All roads, apparently, lead back to Texas in the never-ending litigation against the federal surprise billing law.

The Texas Medical Association has filed a brand new lawsuit in a district court in eastern Texas, arguing the Biden administration’s final surprise billing rule from August still puts a “thumb on the scale” for health insurers. Three dominant provider lobbying groups — the American Hospital Association, American Medical Association, and Association of Air Medical Services — also told a judge last week they were dismissing their claims against the No Surprises Act in their D.C. district court and instead were going to cheer on their Texan comrades’ new lawsuit.

To recap: These provider groups still hate the part of the law that settles out-of-network disputes between providers and insurers, even though the final rule made it a little easier for them to potentially get higher payments from arbiters. Now, they are putting all their eggs into the basket of Judge Jeremy Kernodle, a Trump appointee who was officially assigned the case on Friday.

Why go running to Kernodle? Well, it sure looks like friendly territory: He has already ruled favorably for both the Texas Medical Association and LifeNet, an air ambulance company. Kernodle also used to work at a law firm, Haynes and Boone, that not only represents providers but also represented a shadowy group called Action for Health that filed a brief in support of the Texas Medical Association’s initial surprise billing lawsuit. The AHA and AMA did not respond to questions about Kernodle.

A federal judge last week cleared the way for UnitedHealth Group to buy Change Healthcare, creating a dominant entity that audits and adjudicates health insurance claims. My colleague Tara Bannow read through the redacted opinion and was most interested in why the judge decided to let the deal proceed.

The judge was completely swayed by testimony from UnitedHealth executives who said there is a strict firewall between the conglomerate’s health insurance business (UnitedHealthcare) and its claims processing business (Optum), Tara writes. Optum houses sensitive data on 220 other competing insurers — pretty much every major insurer in the country — and federal antitrust attorneys argued UnitedHealth could easily use that data against its competitors to poach employer insurance clients.

But UnitedHealth CEO Andrew Witty said at the trial that breaching that firewell, and the trust of insurers, would be “hugely destructive” to the company’s reputation and financial interests. The judge went along with those vibes, saying the government “failed to show that United’s post-merger incentives will lead it to take such extreme actions.” It’s probably worth monitoring whether UnitedHealth starts capturing more employer health plan business from competitors.

One other note: UnitedHealth is selling a major part of Change, a subsidiary called ClaimsXten that automatically processes insurance claims, to private equity firm TPG. That sale “will preserve competition in the market” instead of giving UnitedHealth 90% market share, the opinion reads. But that sale might not have happened unless the government intervened, because UnitedHealth didn’t really look to sell ClaimsXten until January 2022.

So much for that broker brawl

In August, we told you about a lawsuit unfolding between two large insurance consulting houses, Gallagher and Alliant, in which allegations of employee poaching and spying were bandied about. Well, it turns out neither side wants to air its dirty laundry.

Gallagher and Alliant reached a tentative and unspecified settlement earlier this month, according to a new court filing. They are halting all discovery of documents and are asking the court for a month to finalize the settlement. We, of course, would love to see those documents, and I’m sure employers would, too. 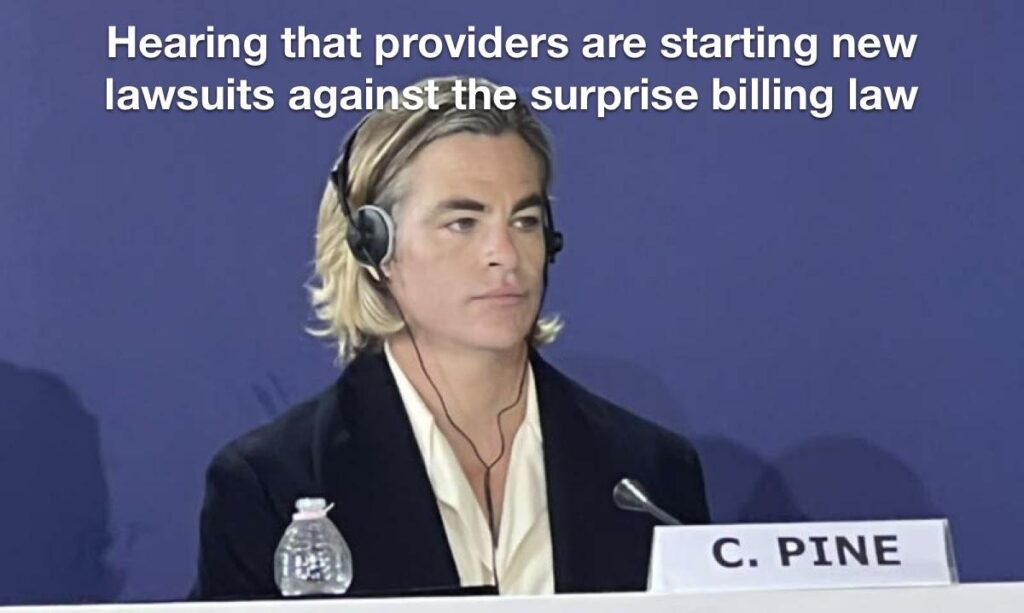 Bob is a business of health care reporter at STAT. He covers hospitals, health insurance, and other corners of the industry — with a goal of explaining and shining light on the massive amount of money flowing through the system.