GETTYSBURG, Pa. — At the Gateway mini mart here, you can buy menthol-flavored hemp cigarettes, an impressive 1-pound bag of pipe tobacco, or a Dragon Ball Z-themed bong — or, you can submit a formal comment to regulators at the Food and Drug Administration.

A sign on the door warns consumers: “The FDA Is Trying To Ban Menthol Cigarettes and Flavored Cigars.” Scan the QR code at the bottom of the poster and it’ll take you to the website for a group called Citizens for Tobacco Rights. There, you can submit a comment opposing the FDA’s April proposal to ban menthol and flavored cigarettes and cigars, which would still have to be finalized formally to take effect.

Citizens for Tobacco Rights is run by Philip Morris USA, the maker of Marlboro cigarettes, and other companies under the Altria corporate umbrella, including John Middleton, the makers of Black and Mild cigars. If you squint, you’ll see at the bottom edge of the poster — printed in tiny white letters — that the poster itself was paid for by Altria on behalf of Philip Morris and John Middleton.

The poster is one of the many ways tobacco companies are drumming up opposition to the FDA’s controversial proposed ban of menthol and flavored tobacco products.

Marlboro has sent out emails to its customers, too — even those who haven’t signed up for anything close to political advertising. Liz Overhiser, a smoker in Michigan who supports the menthol ban, told STAT she may have signed up for coupons “possibly a decade ago” but in May she received an email from Marlboro urging her to “Speak Out Against a Ban on Menthol Cigarettes.” The link included in that email directs to the Citizens for Tobacco Rights as well.

All told, the cigarette company’s efforts appear to have netted at least 20,000 comments opposing the proposed regulation. Those 20,000 comments all state, verbatim, that “banning menthol cigarettes unfairly limits adult choices for tobacco products that are already highly regulated and age-restricted.”

Tobacco distributors, like gas stations and smoke shops themselves, have become a major force opposing the proposed ban, too. Tobacco retailers have submitted more than 25,000 nearly identical comments warning that flavored tobacco bans “could shift sales to illegal markets where many consumers can still get them, but without any regulatory protection or underage prevention.” Organizations representing tobacco sellers in states like Texas and Arizona also met directly with FDA officials earlier this year opposing the ban.

The sheer volume of consumer and business interest has forced top FDA officials to take notice. Brian King, the newly installed director of the FDA’s tobacco center, has repeatedly emphasized the onslaught of input. 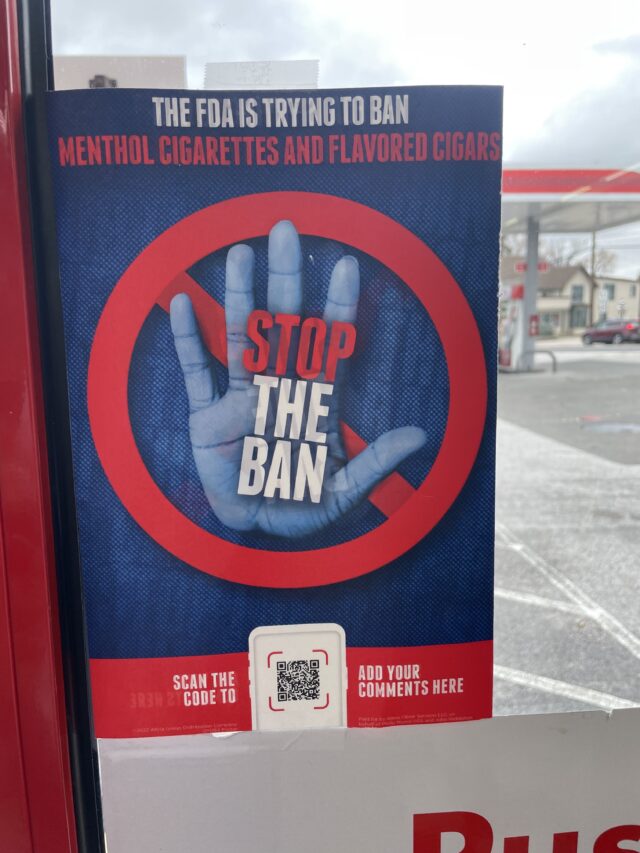 “We got about 250,000 comments — so not a negligible amount — and the FDA goes through every single comment,” King said during public remarks earlier this month. “We are committed to getting through those comments as quickly as possible.

Steven Balla, co-director of the George Washington University Regulatory Studies Center and an expert on mass comment campaigns, told STAT he was doubtful that the campaign itself would work to change the FDA’s mind.

“I suspect that the administration has pretty clear preferences and is going to go ahead [with its proposal],” said Balla, who cited his research showing that mass comment campaigns have less of an impact on an agency’s rulemaking process than other substantive comments.

The comments are just one element of tobacco companies’ sweeping strategy to pressure regulators to abandon the plan.

A number of groups with financial ties to tobacco companies, from conservative tax groups and business lobbies, to law enforcement groups and Black farmers, have also mobilized opposition to the menthol ban. These groups have filed comments with the FDA, met directly with FDA officials, and spoken publicly against the ban, according to STAT’s review of federal records and public agendas.

Tobacco companies have also been aggressively courting the Black community, more generally, including reportedly offering a Black pastor $250,000 to oppose the ban.

Trending Now: 6 things to know about Apellis’ eye drug ahead of FDA decision

Law enforcement groups with ties to the tobacco industry have been particularly active. The Law Enforcement Action Partnership and the National Organization of Black Law Enforcement Executives, both which received funding from Altria last year, have both spoken out against the ban.

The National Organization of Black Law Enforcement Executives argued in its comments to the FDA that the proposed ban would create “a new category of criminal conduct into our neighborhoods which violate the state and local criminal laws we are obligated to enforce.” Current and former police officers involved in the groups also spoke at an FDA “listening session” this summer.

The National Sheriffs’ Association, which also has received funding from Altria, also met directly with FDA officials this spring.

An Altria spokesperson said in a statement that the group “inform[s] stakeholders of our public policy positions and, when appropriate, may ask them to share their views.”

“Many – including harm reduction advocates, criminal justice reform groups, law enforcement organizations, regulated retailers, voters, farmers, unions, and adult consumers — share our opposition to a prohibition on menthol cigarettes and have decided to share their views,” she added.

STAT’s coverage of the commercial determinants of health is supported by a grant from Bloomberg Philanthropies. Our financial supporters are not involved in any decisions about our journalism.

Nicholas Florko reports on the commercial determinants of health.