BOISE, Idaho — When he took on the state department of corrections, Phil Turney didn’t have a computer, let alone internet access.

For two weeks, hunched around bankers boxes in the Idaho State Correctional Center’s multipurpose room, he toiled on his Smith Corona Wordsmith 200 typewriter, lifting legalese from a copy of the Prisoner’s Self-Help Litigation Manual and an earlier lawsuit in Minnesota. The former cab driver — serving an unusually harsh life sentence for the limited injuries and damage he caused driving into two parked police cars while intoxicated — enlisted friends on the outside to mail him piles of medical treatment guides and legal filings.

Turney argued, across 59 painstaking pages of his 2018 complaint, that Idaho’s policy of treating only the sickest people in its custody for hepatitis C constituted cruel and unusual punishment for prisoners with the virus, like him. Now, after more than four years, Turney’s lawsuit is in the final stages of settlement. The terms require the state to allocate at least $29.25 million to hepatitis C treatment for incarcerated people in the state.

Nearly all the progress the country has made in treating hepatitis C in prisons has come because incarcerated people have filed their own lawsuits against their jailers. More than a dozen states have settled or lost prisoner-led hepatitis C lawsuits in the last eight years, and have been forced to dramatically ramp up treatment for the deadly infection.

The lawsuits demonstrate how much people in prison can achieve. But they also show the desperation of people who have been systematically denied access to therapies that could save their lives.

“These lawsuits come from the terrible set of circumstances of having a viral infection that you know to be curable [with a pill] that you can’t get … because the prison tells you you’re not sick enough,” said Kevin Costello, the litigation director of the Center for Health Law and Policy Innovation at Harvard Law School, which has helped prisoners sue for hepatitis C treatment. “They are frustrated, and that’s why they end up in court.”

Still, there are enormous barriers facing incarcerated people who try to sue for access to medical care. Success is rare: Incarcerated people lost in the vast majority of the more than 100 resolved lawsuits about hepatitis C care in prisons that STAT identified.

It’s “virtually impossible” for incarcerated people representing themselves in a lawsuit over hepatitis care to win in court, said Samuel Weiss, executive director of Rights Behind Bars, a legal advocacy organization that helps incarcerated people get dismissed lawsuits overturned. People in prison often lack access to legal materials, must comply with complex rules governing litigation, and face extra bias from judges, he said.

“The federal judiciary is very dismissive of the claims of incarcerated plaintiffs … and nowhere is that more true than in the context of medical care,” said Weiss. “Just dealing with this is something that federal judges find obnoxious.”

Turney was diagnosed with hepatitis C in the early 2000s. In 2016, prison officials insisted his liver was still healthy, even though he hadn’t had an intensive examination since 2003.

He was a few years away from parole, but he couldn’t shake the creeping suspicion that the virus would prevent him from ever reconnecting with his daughter Cora, who was just two and a half in 2004 when he crashed his cab into the Boise police cruisers.

Eager to file a class-action lawsuit on behalf of all incarcerated people in Idaho with hepatitis C, Turney knew he needed to document both his own rebuffed efforts for treatment and similar efforts from other prisoners. He convinced four other men, Billy Ray Bartlett, James Hendrickson, Reuben Cortes, and Michael McCall, to begin documenting their failed attempts to access hepatitis C drugs. For months, they flooded the prison staff with administrative grievances requesting treatment.

“I should not have to wait until I am almost dead to receive help from medical,” McCall wrote in 2016.

Related: Prisons say they can’t afford to cure everyone with hepatitis C. But some are figuring out a way

Turney also had to demonstrate that so-called direct-acting antivirals, as expensive as they may be, were the “standard of care” in the outside community, and thus must legally be offered to incarcerated people as well.

But getting information about the options for treating hepatitis C was taxing. Turney had learned about the new drugs that could cure his condition from TV commercials, but he didn’t have any information beyond the short explanations in those ads. That’s where his friends came in, sending him manila envelopes stuffed with studies and other information he’d request over the phone.

Shortly after Turney finally filed the complaint, a judge nearly tossed it out.

The judge split his carefully crafted class-action complaint into five different lawsuits, one for each of the men. Soon, thousands of pages of documents began showing up at the prison as the lawsuit moved toward the long, tedious process of legal discovery.

“I realized, I’m way out of my league,” Turney said.

Turney and Bartlett began blindly calling lawyers licensed to practice in Idaho. They eventually found Richard Hearn, after calling another lawyer so many times the man blurted out in frustration that he needed to try the civil rights lawyer, who practices in the southeastern corner of the state.

Turney went back to his Wordsmith 200 and drafted his plea.

“Naturally the purpose of my letter is to ask for your assistance in prosecuting the case. I harbor no illusion as to the massive undertaking the suit presents,” Turney wrote. “Because a number of Idaho inmates have died as a result of untreated HCV … I am resolute on correcting this problem.”

Hearn took the case. It took him five months to successfully put the five suits back together and take over the discovery process. About three years later, the case was preliminarily settled.

By then, Turney had gotten his hepatitis C pills. The Department of Corrections decided he was eligible for treatment a year after he filed his lawsuit because, officials said, his liver had quickly deteriorated. 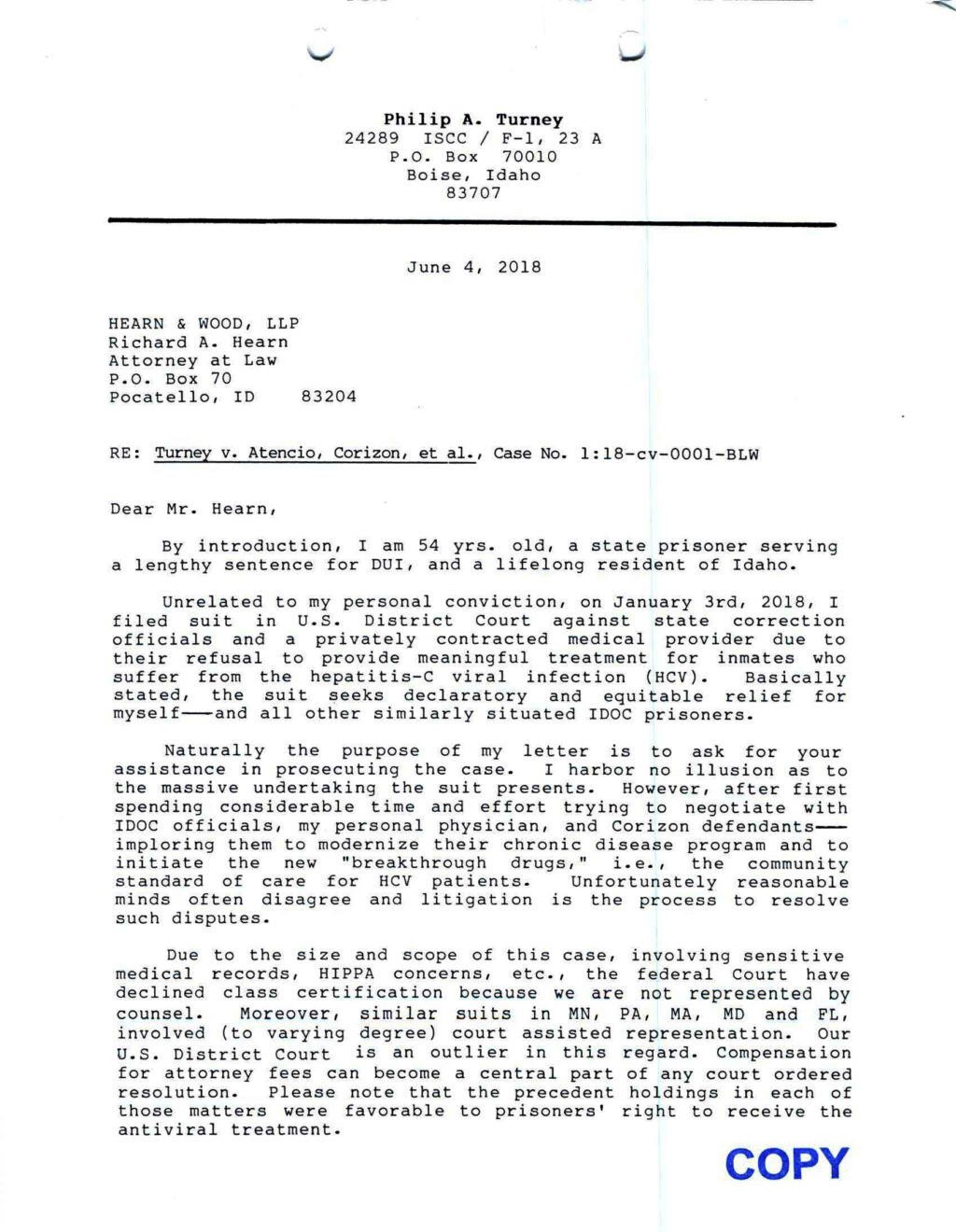 Turney’s lawsuit was successful because of his meticulous efforts — from carefully documenting the prison’s refusal to treat his condition to scouring the state for an attorney that could take the case.

But for many incarcerated people throughout the country, that’s not the case. Most lawsuits STAT reviewed resembled pleas for help rather than thoughtfully crafted legal arguments. Other lawsuits failed to follow specific rules governing prisoner lawsuits.

As a result, they’re often dismissed by judges.

In all of the more than a dozen prisoner-led lawsuits that have prompted policy change in states, an attorney worked alongside the incarcerated person for at least some of the time. The settlements span the country from Utah and Texas to Connecticut, Vermont, and Maine.

In most, several prisoner-led lawsuits failed before an attorney-led challenge ultimately succeeded. And even with lawyers, prisoners in two states — Kentucky and Tennessee — have had their claims rejected by federal judges.

In some states, incarcerated people have had no luck at all finding lawyers and changing policy. In Arkansas, at least five men have filed lawsuits seeking treatment for their hepatitis C, all of which have been dismissed.

Sometimes, prisoner-led lawsuits fail for reasons that seemingly have nothing to do with the quality of their health care. Blair Mitchell, a hepatitis C-positive prisoner in Georgia, sued the state after prison officials repeatedly denied his requests for treatment. He’d claimed he had developed severe liver scarring.

But his suit was thrown out within two months: The judge chastised Mitchell for filing too many frivolous lawsuits and argued that his complaints “do not describe a real and imminent danger of serious physical injury.” The judge said that Mitchell “merely complains he is not being provided different (or the newest available) treatment for his medical conditions.”

Mitchell died the following year from liver cancer, still waiting on an appeal of that dismissal.

Turney was well aware of the uphill battle he faced when he filed his own lawsuit.

He learned the ins and outs of prison litigation from Bob Jones, a longtime friend at the Idaho State Correctional Center. Jones, a “jailhouse lawyer” type, filed several lawsuits on behalf of Idaho prisoners during his time in custody. Turney had helped on a number of those cases, but one day in 2015, Jones was taken to the infirmary and never came back. Turney knew it was his turn to put what Jones taught him into action.

“People were saying, what are you going to do about it, Phil?” Turney said. “I was the individual who could devote the time and the attention to really put together a good case for changing the policy.”

STAT found that more than 1,000 incarcerated people died from hepatitis C-related complications in the six years after a curative drug hit the market. Death Sentence explores prisons’ blatant refusal to test and treat people with the condition and how that has impacted incarcerated people and their families. Read more of the stories from the project.

Nicholas Florko reports on the commercial determinants of health.

After bullying allegations, Eric Lander will return to run a lab at the Broad Institute

Pfizer is scolded by a U.K. trade group for remarks its CEO made about vaccination