WASHINGTON — Seventy-two senators and 302 members of the House of Representatives cashed a check from the pharmaceutical industry ahead of the 2020 election — representing more than two-thirds of Congress, according to a new STAT analysis of records for the full election cycle.

Pfizer’s political action committee alone contributed to 228 lawmakers. Amgen’s PAC donated to 218, meaning that each company helped to fund the campaigns of nearly half the lawmakers on Capitol Hill. Overall, the sector donated $14 million.

The breadth of the spending highlights the drug industry’s continued clout in Washington. Even after years of criticism from Congress and the White House over high prices, it remains routine for the elected officials who regulate the health care industry to accept six-figure sums.

The findings, published in a new STAT examination of the drug industry’s political giving, also come on the heels of an extraordinary year for the pharmaceutical industry. In 2020, the federal government leaned heavily on drug makers to develop Covid-19 vaccines at lightning speed — helping to rehabilitate the industry’s reputation and political credibility in the process.

STAT’s analysis includes an interactive map that allows readers to visualize contributions between individual drug industry PACs and states, lawmakers, and congressional districts. It builds upon a previous analysis STAT published before the election, and now includes complete records for the 2020 election cycle.

Donations from companies like Pfizer and Amgen are among the most visibly widespread.

While the drug industry gave money to a broad range of candidates, it focused in particular on those on key committees that oversee health care legislation.

The top recipient of drug industry cash was Rep. Richard Hudson, a Republican from North Carolina. Major drug industry groups donated $139,500 to his most recent campaign, a sum remarkable in large part because Hudson is not a particularly powerful lawmaker, nor a known fundraiser. He does hold a seat on the Energy and Commerce Health subcommittee, an influential panel that oversees a large share of health care legislation before Congress.

STAT’s searchable lawmaker tool allows users to track individual lawmakers and their corporate PAC contributors. Any sitting members of Congress not pictured in the map did not accept any checks from the 25 pharmaceutical industry groups in STAT’s analysis.

Industry allies like Sens. Thom Tillis (R-N.C.) and Chris Coons (D-Del.) were also among the top recipients of pharma money. Both hold seats on the Senate Judiciary Committee, which oversees intellectual property law. In 2019, the pair authored a bill that would expand on the drug industry’s patent protections.

The donations came on the heels of Democrats’ aggressive drug pricing push in 2019. Led by House Speaker Nancy Pelosi, House Democrats passed H.R. 3, the Lower Drug Costs Now Act. If passed, the bill could have cost the industry as much as $500 billion in revenue, but it was never taken up by the GOP-controlled Senate.

Drug industry lobbyists viewed Republicans’ control of the Senate as critical to the industry’s interests. But after a pair of January runoff elections in Georgia, Democrats control the chamber: Their 50 seats, plus the tie-breaking vote of Vice President Kamala Harris, give the party a razor-thin majority.

Despite the drug industry’s apparent interest in preventing Democrats from controlling both Congress and the White House, contributions were almost evenly split between major political parties: $7.1 million went to Republicans, and $6.6 million went to Democrats.

But several top Republicans, like Sen. Mitch McConnell (Ky.) and Rep. Kevin McCarthy (Calif.) — the GOP leaders of the Senate and House, respectively — also ranked in the top 15 of all recipients.

As was the case in state legislatures, the pharmaceutical industry was remarkably effective when it came to spending money on winning candidates. Very few candidates who accepted drug industry cash ended up losing reelection. Many donations targeted Republican senators at risk of losing their seats, like Tillis. Other top recipients included GOP Sens. Joni Ernst (Iowa), John Cornyn (Texas), and Steve Daines (Mont.). 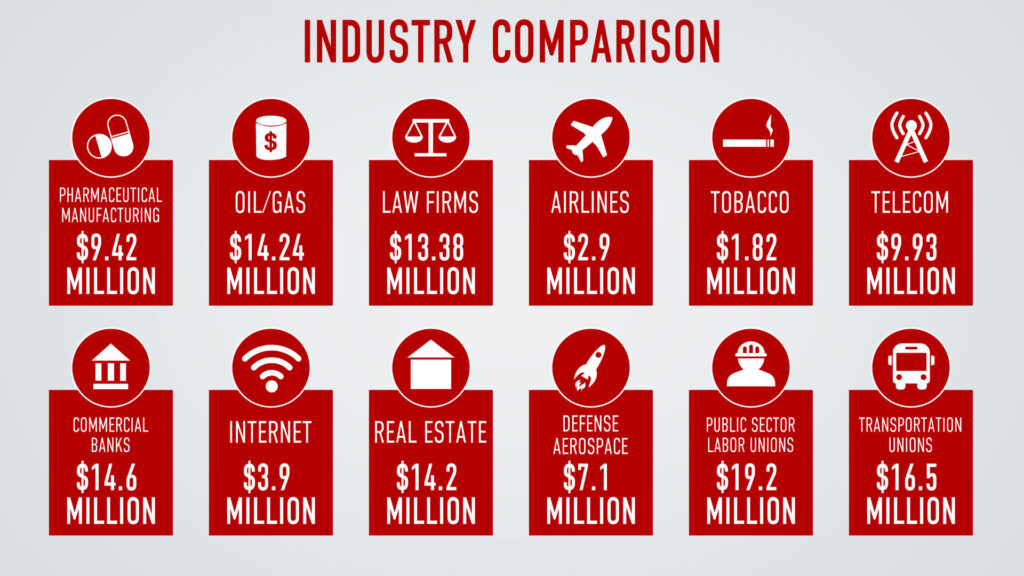 STAT’s examination relied on data from the Center for Responsive Politics, which detailed donations from the 23 largest drug manufacturers and the trade groups PhRMA and BIO to members of Congress in 2019 and 2020.

The analysis of the drug industry’s spending on congressional races accompanies a separate examination of pharmaceutical companies’ donations to members of state legislatures. State campaign finance laws vary, and in some cases corporations can make direct contributions to lawmakers. In Washington, however, it is illegal for corporations to donate to candidates. As a workaround, companies form political action committees, or PACs. These outside groups are often funded in large part by contributions from executives, and the individuals who decide how to spend the money are often members of corporate leadership.

The analysis includes contributions made directly to candidates’ election committees as well as to PACs affiliated with individual candidates. For example, data visualizations include pharmaceutical contributions to the campaign committee of Sen. Mitt Romney (R-Utah) and to the Believe in America PAC, a separate, Romney-affiliated campaign group. Contributions to both organizations are attributed to Romney.

The data visualization excludes contributions to groups like the Blue Dog PAC, which are loosely affiliated with groups of lawmakers but not directly attributable to a single member of Congress.

While AbbVie acquired Allergan in May 2020, STAT’s analysis considers each company individually for the purposes of analyzing their PACs’ political spending. Similarly, the analysis treats PACs affiliated with Bristol Myers Squibb and Celgene separately, despite the completion of the Bristol Myers Squibb’s acquisition in late 2019. In both cases, the companies operated separate PACs and existed as distinct business entities for much of the 2020 election cycle.

In two cases, the analysis also groups together the subsidiaries of a larger drug manufacturer, even if they maintain PACs distinct from that of their parent company. Takeda contributions are mapped jointly with Shire, its subsidiary. Roche Holdings is represented by the combined PAC contributions of two subsidiaries that maintain their own PACs: Genentech and Spark Therapeutics.

This project is funded by a grant from the NIHCM Foundation. The foundation played no role in the reporting, editing, or presentation of the project.

STAT Plus: Medicare Advantage insurers will score $2 billion gift thanks to limited audits

STAT Plus: The unexpected alliance lobbying for Medicare to pay for new obesity drugs