The cost of healthcare has been on a steady rise for the past decade. By any actuarial analysis, we’re at the dawn of a financial meltdown as the boomers reach that ripe age where healthcare expenditures soar.

This should be enough to spark rampant demand for technology tools to improve efficiency in the industry. But seemingly simple innovations like telemedicine (video exams) and direct appointment scheduling (we can do this for haircuts) are still not widespread. The tech is out there; it’s just struggling to cross Moore’s Chasm to widespread adoption. 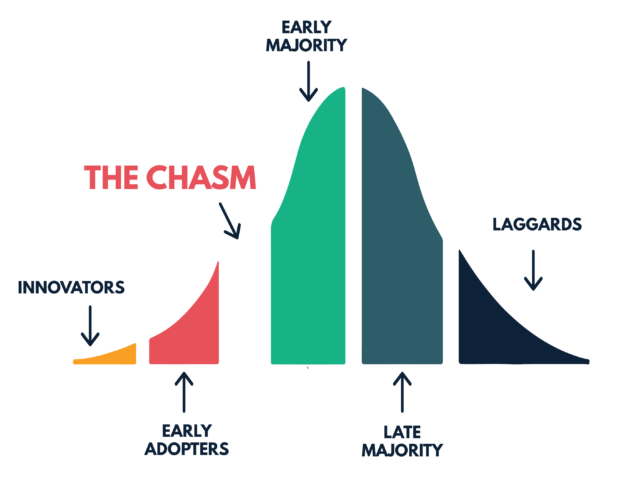 The only software ubiquitously rolled out across the modern enterprise is the electronic health record system. How did the EHR cross the chasm?

EHRs have been around for the better part of four decades. It wasn’t until 2009 when, nestled in the bowels of the American Recovery and Reinvestment Act, was a $26B health IT stimulus aimed at expanding the use of EHRs. After decades of climbing all the way to the Early Adopters, EHRs were able to hitch a ride on subsidies that dragged them across the chasm. Today they are the universal source-of-truth for all clinical data at healthcare organizations.

The chasm isn’t a natural phenomenon or a market failure. It’s a reasonable pause in adoption where innovators must move from a minimally viable product, to a mature offering that performs to expectations, scales effortlessly, and integrates with, or fully replaces, legacy systems. EHRs grew to replace the legacy paper systems that preceded it.

But did government incentives force adoption too soon? Back when these systems were created, the internet had barely been conceived and the term cloud referred to a floating mass of liquid droplets in the sky.

Each EHR implementation was highly customized in an attempt to minimize disruption to doctors. When all was said and done, the EHR at one hospital was wildly different from an EHR at another — even if the software was provided by the same vendor. This has made sharing clinical data outside of the firewall a non-trivial undertaking. Unfortunately, that’s where all the innovation is happening.

There are tens of thousands of healthcare applications on the market. One thing they all have in common is their place on the shores of the chasm. The EHRs that government subsidies dragged across the chasm are now acting as a gate preventing new technologies from being adopted at scale. These are the very same technologies our industry needs to bring efficiency and cost savings to our overburdened healthcare system.

If EHRs are to stay, there is a missing piece of healthcare infrastructure that is needed to bring interoperability to the systems and the army of innovations pushing into the chasm.

At Redox we’re working on building the bridge that will allow healthcare to embrace technology solutions they desperately need. Join us for a webinar on innovation in healthcare and how to get from here, to interoperable: February 7th at 12pm CT.