Scientific and medical advances in cystic fibrosis (CF) represent one of the great success stories in human genetics and medicine, where deep insights into human biology have powered a transformation in the treatment of a life-threatening disease.

CF affects approximately 75,000 people in North America, Europe and Australia. This life-shortening genetic disease affects children from birth, and is caused by a defective or missing cystic fibrosis transmembrane conductance regulator (CFTR) protein. The defective or missing CFTR protein results in disrupted flow of salt and water into or out of the cell in a number of organs, including the lungs. This leads to the buildup of abnormally thick, sticky mucus that can cause chronic lung infections and progressive lung damage.

For the last 20 years, hundreds of researchers and scientists at Vertex have worked relentlessly to discover medicines that address the underlying cause of CF, a scientific problem that was once thought impossible to solve. But the team at Vertex has consistently pushed the boundaries of science and has overcome the challenges that come with being the first to develop new types of medicines. As a result, Vertex has brought three transformative CF medicines to patients in the last six years, and has a pipeline of investigational medicines that have the potential to treat 90 percent of all people living with this rare, life-shortening disease.

In recognition of these significant advances, Dr. Paul Negulescu, senior vice president and site head at Vertex’s San Diego research site, was awarded the 2018 Warren Alpert Foundation Prize alongside Francis Collins, Lap-Chee Tsui, Michael Welsh, and Bonnie Ramsey. This award honors trailblazing scientists whose work has improved the understanding, prevention, or treatment of human disease. This year’s Alpert Prize honors the groundbreaking work of Dr. Negulescu and the entire Vertex team who discovered and developed the first approved medicines that address the underlying cause of CF. 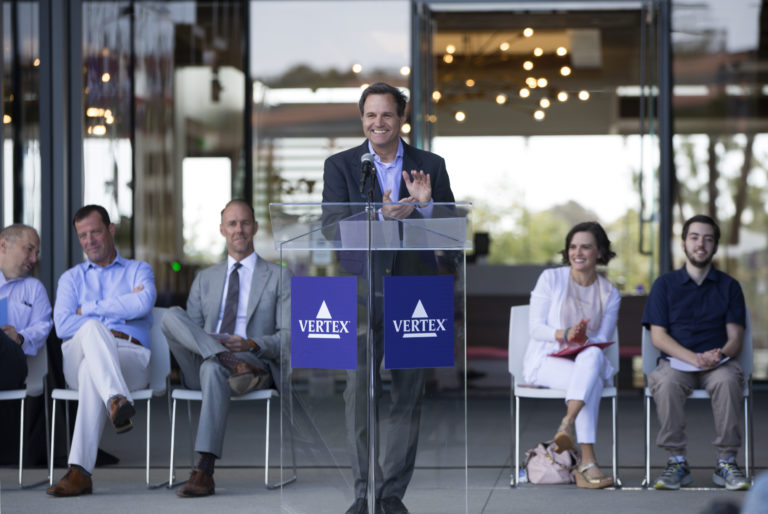 “This award recognizes the remarkable path from the discovery of the CF gene to the development of therapies that treat the cause of CF,” said Dr. Negulescu. “It has been a privilege for me to be part of this journey and I am honored to receive the Alpert Award with such accomplished scientists and physicians as Drs. Collins, Tsui, Welsh, and Ramsey. I am also humbled and grateful to represent the amazing team that discovered and brought these medicines to patients. This award is meaningful for all of us because it acknowledges that our work over the last 20 years has had a positive impact on people with CF and their families.”

Dr. Negulescu has worked on Vertex’s CF program since its inception.

“I was fascinated by the scientific challenge and deeply impacted by meeting people with CF and their families,” said Dr. Negulescu. “It became clear to me that we had an opportunity to work on something special that could make a real difference in people’s lives.”

The Vertex team’s work to reach the company’s goal of ultimately curing CF continues on. “The CF story isn’t over for us,” said Dr. Negulescu. “In fact, I believe the best is yet to come, as we continue research for even better therapies to treat even more people with CF. We are looking and will continue to look for new compounds and pursue other methods of treatment until this disease is essentially cured.”

Scientific innovation is at the heart of Vertex’s business — more than 70 percent of Vertex’s revenue has been reinvested in research and development over the last five years, with over $11 billion invested since 1989. In addition to CF, Vertex has more than a dozen ongoing research programs focused on the underlying mechanisms of other serious diseases. To learn more about the company’s commitment to bring transformative medicines to people living with serious diseases, visit www.vrtx.com.