As the pharmaceutical industry continues to wrestle with questions around long-term sustainability, stakeholders across the drug development ecosystem are searching for new ways to lower costs, increase productivity, and move the industry forward. A new study from the Economist Intelligence Unit (EIU) and commissioned by PAREXEL, the world’s leading innovator of biopharmaceutical services, makes a strong, data-driven case for accelerating adoption of drug development innovations as a way to help ensure the industry’s future sustainability.

The study’s expert panel, made up of researchers, decision makers and influencers across the healthcare ecosystem, gauged the impact of these innovations in three key therapeutic areas — neurology, oncology, and rare diseases. Within each area, they evaluated success by measuring likelihood of a drug being launched, trial efficiency, and patient access.

While no single innovation holds the key to moving the industry forward, the study suggests that the positive impact of each innovation is undeniable — and that the pharmaceutical industry may already have the right tools at hand to unlock new levels of efficiency and productivity.

And while some of the innovations examined in the study have been around for at least the past 10 years, low adoption was identified as a major challenge. “The adoption rates of [these] innovations range from less than one percent to fourteen percent,” says Alberto Grignolo, Corporate Vice President at PAREXEL. “This is striking because one would expect these innovations, as impactful as [the report] documents them to be, would already be more widely adopted.”

With fewer than 10% of drugs in development making it through the regulatory approval process, simply getting a drug to market can be a challenge. And the results from the report tell a simple but powerful story: using innovations like those examined in The Innovation Imperative improves the chances of a drug being launched. Drugs developed using the four innovations showed a 10 to 21 percentage point increase in likelihood of market launch compared to drugs developed without these processes (see Figure 2).1 While this trend can be seen across all three therapeutic areas, the difference in likelihood of launch was most striking in oncology, where use of innovative trials led to a 33 percentage point greater likelihood of making it to market.3 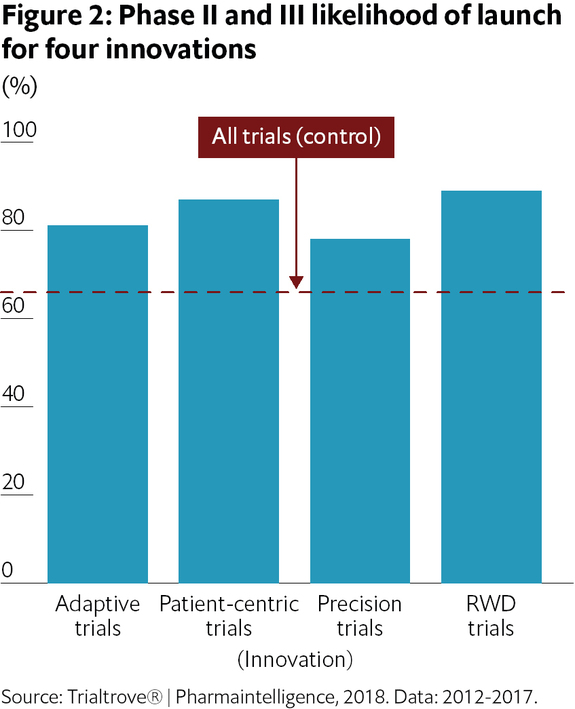 Patient access to these drugs is perhaps the most important metric investigated in the study. As drug development has slowed and become increasingly expensive, payers and providers have become wary of the industry’s current approach to “innovation”, and less likely to accept evidence from such trials. “How do you have a better understanding of the value proposition for payers?” asks Jim Kremidas, Executive Director at the Association of Clinical Research Professionals. “How do we get drugs that are going to truly have an impact on patients and get to the market faster?” Once again, the EIU study demonstrates that embracing these types of innovative trials more widely may be the answer.

The Innovation Imperative’s key findings make a compelling case for pushing pharmaceutical innovation into the mainstream. But making these innovations a reality, says Kremidas, will require the industry to put more people to work investigating their benefits. “We have exponential growth in demand for research and patients, but we have linear growth in the people doing the work — and the gap is getting larger,” he says. “Additionally, the existing workforce can sometimes get stuck in their ways. We need to drive change throughout the clinical research enterprise. Pushing these innovations forward may not be easy but encouraging payers, patients and regulators to embrace the evidence is a good start.”

To hear more from industry leaders about The Innovation Imperative register to attend HORIZONS, an annual event hosted by PAREXEL taking place October 16-17, 2018 in Washington, DC. Throughout the conference experts will explore how innovation is driving digital transformation and patient centricity, triggering larger conversations that prompt change and collaboration across the biopharmaceutical industry.