Pancreatic cancer is poised to surpass colorectal cancer as the 2nd leading cause of cancer-related deaths in the United States by 2020.[1]With multiple high-profile diagnoses over the past few years vaulting the disease into the public conversation, researchers and the biopharmaceutical industry are focused on gaining a better understanding of this complicated disease.

As one of the most aggressive and deadly cancers, metastatic pancreatic cancer has been viewed as a death sentence upon diagnosis.[2]

This is often attributed to the fact that many patients (more than 52%) are diagnosed in the later stages of disease when the cancer has started to spread to nearby parts of the body. The lack of proven biomarkers makes it extremely difficult to detect the disease in the early stages. Moreover, symptoms, which can range from abdominal or back pain, loss of appetite and digestive problems are non-specific and often associated with other conditions.

Barriers to Treatment
The structure of a pancreatic tumor makes it extremely difficult to develop therapies that can penetrate the dense tissue that surrounds and protects it. As such, the malignant cells often resist therapies, which speaks to why pancreatic cancer has the lowest clinical trial success rate in oncology. 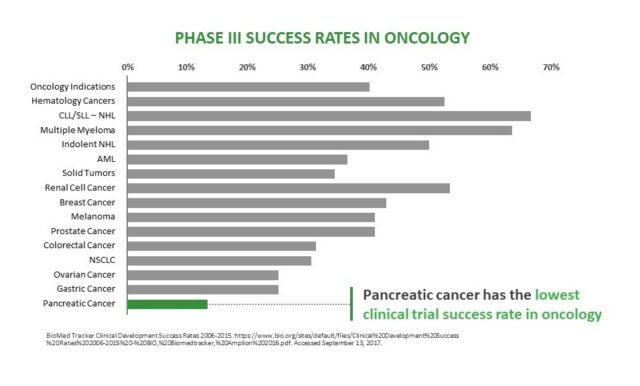 Approved treatment options for pancreatic cancer exist, but when compared to other cancers, patients are less likely to receive treatment following their diagnosis. A recent study published in JNCI Cancer Spectrum showed significant variation in treatment rates for de novo metastatic cancer patients who died within one month of diagnosis. Of the 18,159 pancreatic cancer patients analyzed, only 12.5 percent received at least one treatment modality compared to 37.2 percent of patients with colorectal cancer (n=12,034) (breast cancer n=3,609, 34.9%; lung cancer n= 67,046, 29%).[3] The authors noted the data suggest oncologists may be more likely to recommend treatment for cancer types known to respond more favorably to treatment in terms of overall survival versus cancers where a physician’s ability to predict survival is less clear.

Treatment Sequencing in Metastatic Pancreatic Cancer
Despite these challenges, emerging research on immune-based treatments and therapies that target specific gene mutations continue to show promise among specific subsets of patients.

*A regimen consisting of leucovorin calcium, fluorouracil, irinotecan hydrochloride and oxaliplatin used for the treatment of pancreatic cancer.[4]

The implementation of combination chemotherapies has helped give patients the chance to be on treatment and remain on therapy beyond the first-line. From 2006-2015, the number of patients receiving second-line therapy has increased 18 percent.

For the patients whose disease has progressed following gemcitabine treatment, irinotecan liposome injection (ONIVYDE®) in combination with fluorouracil (5-FU) and leucovorin (LV) has been proven to help patients live longer (Median Overall Survival: 95% CI; 6.1 months vs 4.2 months for 5-FU/LV alone)**.[5] ONIVYDE® in combination with 5-FU/LV is the first and only second-line treatment approved by the Federal Drug Administration in combination with 5-FU/LV for metastatic pancreatic cancer after gemcitabine-based therapy. ONIVYDE® has been shown to extend overall survival by 32% and double progression-free survival (Median PFS: 95% CI; 3.1 months vs. 1.5 months for 5-FU/LV alone).

**NAPOLI‐1 was a global, phase 3, randomized, open‐label, multicenter trial in patients (N=417) with metastatic adenocarcinoma of the pancreas whose disease had progressed following gemcitabine‐based therapy. Patients were initially randomized to receive ONIVYDE® (100 mg/m2 every 3 weeks) or 5‐FU/LV. After 63 patients were enrolled, a third arm, ONIVYDE® (70 mg/m2 every 2 weeks) + 5‐FU/LV, was added. Treatment was continued until disease progression or unacceptable toxicity. The primary endpoint was median OS. Additional efficacy endpoints were PFS and ORR. There was no improvement in OS for ONIVYDE vs 5-FU/LV (HR=1.00, p=0.97 [2-sided log-rank]).

ONIVYDE is not indicated as a single agent for the treatment of patients with metastatic adenocarcinoma of the pancreas.

For more Important Safety Information please see the end of the article.

To learn more about Onivyde and how it may help in appropriate metastatic pancreatic cancer, please visit here.

There is no denying the urgency to improve outcomes for patients and continue to work towards a cure. Ipsen is dedicated to continuing research in pancreatic cancer. For the 56,770 people who will be diagnosed with pancreatic cancer in the U.S. this year, every moment matters – whether it’s witnessing the birth of a grandchild, seeing a child get married or an extra day at a favorite destination.[6]

ONIVYDE® (irinotecan liposome injection) is indicated, in combination with fluorouracil (5-FU) and leucovorin (LV), for the treatment of patients with metastatic adenocarcinoma of the pancreas after disease progression following gemcitabine-based therapy.

Limitation of Use: ONIVYDE is not indicated as a single agent for the treatment of patients with metastatic adenocarcinoma of the pancreas.

USE IN SPECIFIC POPULATIONS