Christine Orr, a self-described “hemophilia mom,” is the primary caregiver for her ten-year-old son John. “I’m the only one who treats him,” she says.

Upon learning that John had severe hemophilia A, Christine, who had no prior medical training, taught herself how to insert IVs by practicing on volunteers at the local fire station. “I became an amazing nurse.”

John had four major bleeds by the time he was nine months old, so doctors surgically implanted a catheter in his chest for easier medication delivery. Every other day, Christine administered John’s factor VIII infusions while he was strapped to a “papoose board” to keep the IV site sterile.

“It’s just not your normal parenting bandwidth,” she says. “I haven’t been away from him since he was born.”

Hemophilia A is a rare, genetic bleeding disorder caused by a deficiency of clotting factor VIII. As an X-linked, recessive condition, hemophilia A is more common in males. At risk for life-threatening, spontaneous bleeding that can result in debilitating joint damage, people with severe hemophilia A receive prophylactic factor VIII infusions several times per week.

Due to factor VIII’s short half-life, not all bleeds can be prevented, and they often occur during normal activities of daily life. Furthermore, factor VIII therapy is expensive, time-consuming, and labor-intensive. 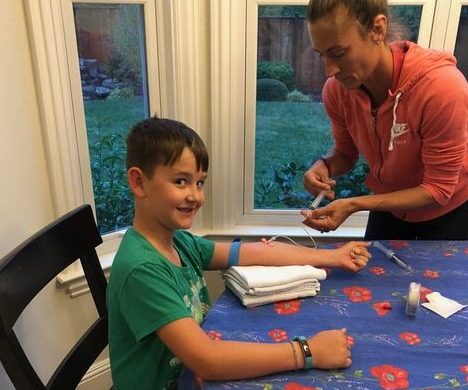 On days when John does not receive factor VIII, “you’re kind of in lock-down mode,” Christine says. “I’m trying to explain to my son why he has to stay inside and do watercolors instead of play outside with his brother… [factor VIII’s] 12-hour half-life just doesn’t cut it for an active kid.”

In addition to monthly visits to the hematology clinic, Christine has made countless trips to the Emergency Department with John, for whom a simple fever could be deadly. “We have to go to the ER for every single fever because of the risk of sepsis,” Christine explains. A life-threatening condition that leads to multiorgan failure, sepsis results from the body’s overwhelming immune response to a bloodstream infection. John’s chest catheter must be kept sterile to reduce the risk of bacterial infection like sepsis, clearly a massive challenge for an active child. “You’ve got a kid who nobody wants to invite over because they’re scared,” Christine says.

Obviously, the Orrs can’t travel too far from home without extensive preparation. Being near an HTC (Hemophilia Treatment Center) in case John needs an emergency transfusion is essential, as is having “megadoses” of factor VIII on hand.

Despite Christine’s devotion to her son, strangers have often expressed concern about his bruising. She was once approached in the supermarket by a woman who asked, “Do you think you’re taking good enough care of your child?”

“It’s a socially isolating disease,” Christine explains. “You don’t want to leave the house…our life has become a social and emotional roller coaster. This is not a temporary experience where we’ll be better at the end of it. It’s forever.”

Physicians working with the hemophilia A population also feel the unique burden of this disease. Dr. Robert Sidonio, a hematologist and Assistant Professor of Pediatrics at Emory University describes the limitations of the current therapy:

“Prophylaxis, or regular infusions of factor VIII to prevent bleeding, works well, but it does require starting an IV,” Dr. Sidonio says. “This creates anxiety [for patients] surrounding infusions.”

Alarmingly, “30 to 40% of those with hemophilia will develop a neutralizing antibody, which renders the factor product useless,” Dr. Sidonio explains. Most develop the antibody in their first 20 to 50 exposures to factor VIII, requiring intensive monitoring in the first 3-4 years of life.

“It’s not a perfect control,” he continues, referring to the traumas, injuries, and joint bleeds that regularly plague those with hemophilia A. “The therapy doesn’t perfectly protect the patients and allow them to have as much of a normal life as they would like to.”

BioMarin, whose focus is on rare diseases, is inspired by the huge aspirations of those living with hemophilia. Through its relationships with determined and dedicated advocates like Christine Orr, BioMarin remains committed to listening to, engaging and working with the hemophilia community.

For more information about BioMarin’s commitment to the hemophilia community, visit www.biomarinhemophilia.com.