The world’s recent experience during the SARS-CoV-2 pandemic paints viruses as threatening microbial agents of disease and death. However, as counterintuitive as it might seem, viruses are crucial to many different, potentially life-enhancing treatments being researched. Gene therapy, which has been explored for more than 50 years as a potential treatment for genetic conditions such as cystic fibrosis, hemophilia, and heart disease, is being researched to determine whether neutralized viruses can be used in a beneficial way to package, protect, and deliver key functional genes for missing or defective proteins to patients. 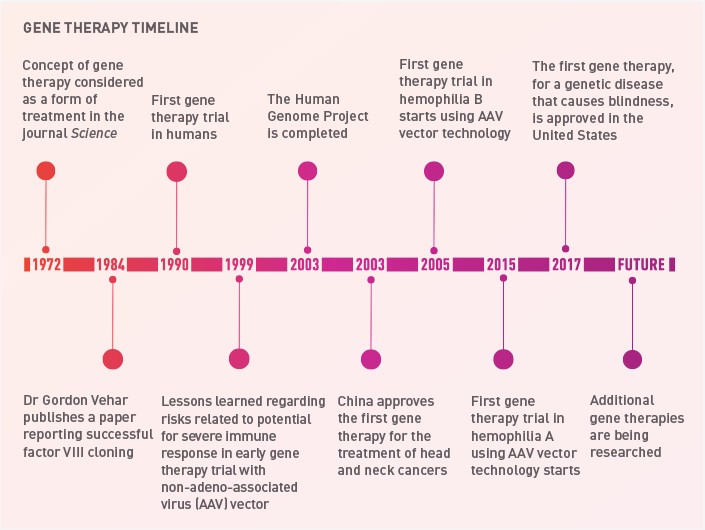 What is gene therapy research?

There are multiple approaches to gene therapy research. One method, called gene transfer, is designed to take a functional gene, place it inside a virus that cannot replicate itself, and introduce it into the body. Once in the body, the goal is for the gene to be expressed, and a functional protein to be produced to replace the missing or defective protein that causes the medical condition.

How does that process work, exactly? A suitable virus with an outer shell that’s large enough to package and protect the new gene is needed. This virus is rendered incapable of replicating on its own, and it contains information that helps it find the specific area in a patient’s body where the functional protein is normally produced. After the patient receives the therapy through an IV infusion, research is investigating whether the virus then travels to that designated area of the body (e.g., liver) and transduces the target cell. Once inside the target cell, the objective is for the new gene to be released, and the target cell to begin to synthesize the protein from the code contained in the gene.

Some genetic conditions are a better fit for this type of therapy than others. Doris V. Quon, M.D., Medical Director at Orthopaedic Haemophilia Treatment Center at The Orthopaedic Institute for Children (Los Angeles, CA), explains that monogenic congenital conditions tied to a defective or missing enzyme are often prime candidates for gene therapy research. When someone is afflicted with a genetic condition, the goal is to provide therapy that reduces the required number of treatments to the barest minimum. Researchers are assessing whether gene therapy can potentially meet this goal. “Generally speaking,” Dr. Quon says, “a major potential advantage of gene therapy being researched is if it can produce the target protein in the patient, the patient’s symptoms can potentially be reduced or eliminated, letting us explore what impact that has on the patient’s qualify of life.”

How are gene therapy agents manufactured?

For the past five years, Robert Baffi, Ph.D., Special Advisor to the Chairman and CEO for BioMarin Pharmaceutical, has been at the center of an effort to construct and commission a new manufacturing facility in Novato, CA that is capable of producing both complex biologics and gene therapy products. Baffi, who recently announced his retirement, has been succeeded by Greg Guyer, Ph.D., explains that, ”The complex structure and ultimate use of gene therapy vectors demands that they be manufactured in a consistent and reproducible manner. They require the right facility and equipment, tremendous teamwork and consistent procedural execution.”

The manufacture of a gene therapy vector starts with a small cell culture preparation of the gene therapy virus and a specific strain of host cells. The initial batch is then successively scaled to a series of larger and larger batches until a final number of viral-containing host cells is achieved. This is followed by harvesting the host cells, breaking them open to release their viruses, clarifying the preparation and removing impurities, and separating and purifying the viruses.

Through this process, a batch of gene therapy agent that at its greatest volume in the manufacturing process measures approximately 2,000 liters with a viral purity range of 5-10% undergoes multiple purification steps until the volume is reduced to 20 liters and purity increased to >99%. The final batch is then frozen (generally at -70oC) until some or all of it is thawed for final packaging and distribution to point of use.

Baffi trains his staff by using an acronym to summarize the gene therapy manufacturing process. “The key to understanding the manufacture of gene therapy agents can be summarized in the acronym “PIPE,” namely Products, Impurities, a validated Process, and validated and properly maintained Equipment.”

Other approaches to gene therapy research that don’t employ the use of viruses are also under investigation, namely those that aim to use the patient’s own host cells or a donor’s host cells to package and deliver the functional gene to the target anatomical site.

The next steps for gene therapy

Any therapy that could potentially reduce or eliminate the need for continual management of disease, reduce reliance on conventional medications, and lessen a patient’s physical, mental, and emotional burdens is worthy of investigation. Gene therapy research has the potential to address some or all of these goals. While it cannot repair preexisting damage caused by a particular genetic condition, researchers are assessing whether it can potentially mitigate the progression of future damage that would occur in its absence. Clinical trials in humans for various gene therapies seek to sort out their effectiveness in meeting these objectives.

“Gene therapy research is advancing, and it’s being used in clinical trials,” says Dr. Quon. “I look forward to research in a wider range of chronic conditions in patients, as well as witnessing on a broader scale the differences that it could potentially make in people’s lives.”