The unknown part of the immune system

Most people are familiar with the immune system and its role in protecting against diseases and infection. But what about the complement system? The complement system is a foundational part of the immune system and is essential to the body’s defense. It first evolved in some of the simplest organisms, like starfish, however, it was a mystery to scientists until about 125 years ago. The complement system is made up of proteins that work together throughout the body to detect and eliminate viruses, bacteria and damaged cells.1 When working properly, the complement system is a strong and powerful tool that helps keep the body healthy. But when the system is thrown out of balance, or dysregulated, the proteins can trigger a dangerous, uncontrolled cascade of reactions that attack cells and tissues, resulting in harmful inflammation and destruction of healthy cells.

In the early 1990s, a connection between this uncontrolled cascade and some rare, and at the time, untreatable diseases started to emerge. Modern scientists, motivated by the possibility to help ease the burdens of patients with few or no treatment options, began the groundbreaking research that would eventually lead to the identification of molecules that could selectively inhibit the complement system. These potential medicines targeted the dysregulated cascade to potentially prevent further damage to healthy cells. However, tackling the complexities of complement biology was no small feat. 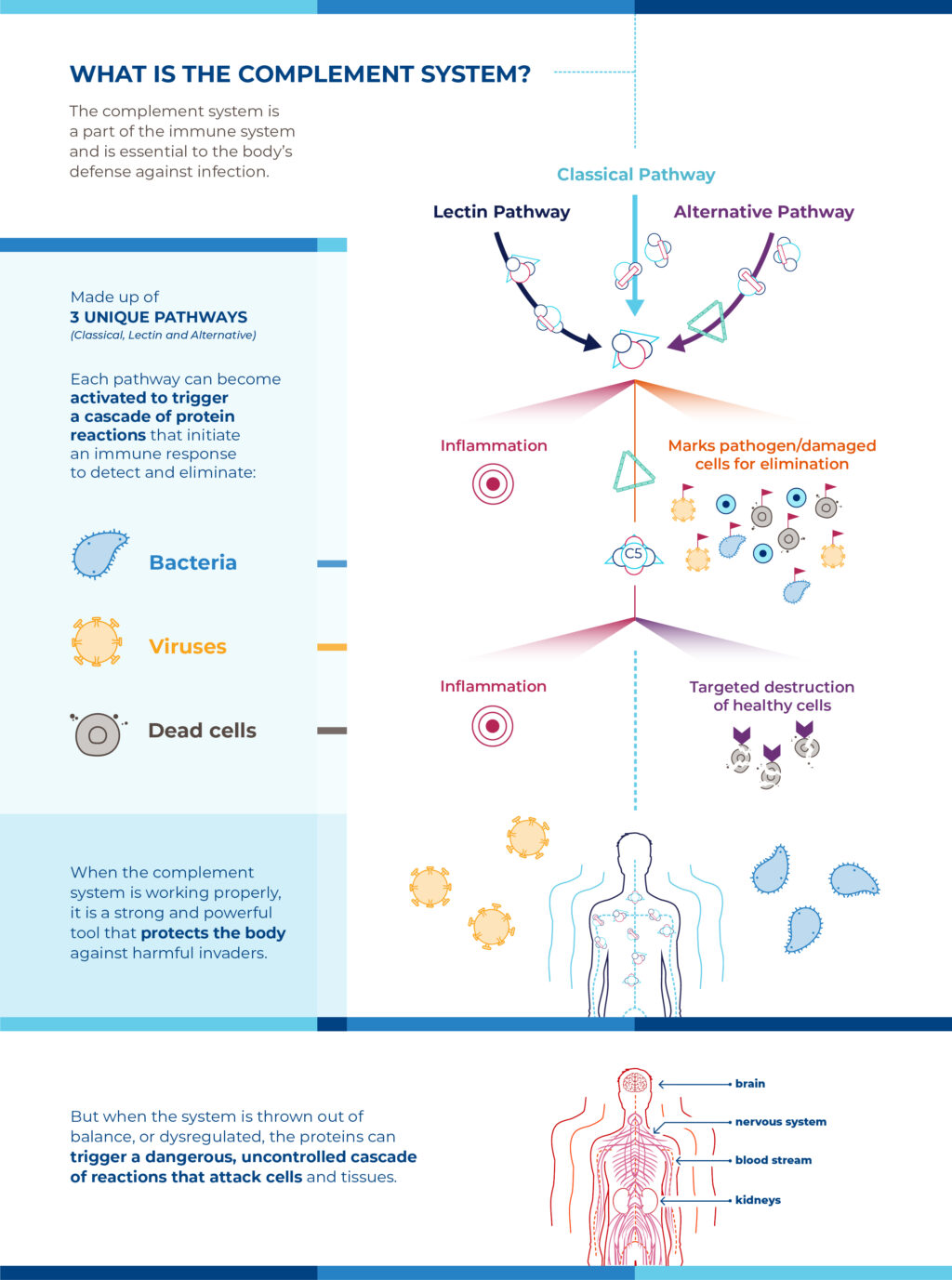 A revelation built on pioneering science

The scientists at Alexion, a biotech company, were among the first to take on this bold translational research. At first, the scientific community was skeptical about complement inhibition — targeting specific parts of the complement cascade to prevent the destruction of cells — speculating that it would not address a key driver of disease. But there were enough compelling early data that the team, along with academics and other experts, believed that the potential benefits were worth the risk of failure — even if they were able to help just one small rare disease patient community.

“As a physician and also involved in clinical research over the last 20 years, I saw firsthand the potential of complement inhibitors as a class of medicines for treating rare and ultra-rare diseases for which there were no other treatment options,” said Dr. Anita Hill, M.D., Ph.D., Vice President and Global Medical Affairs Lead of Hematology and Nephrology at Alexion. “The FDA approved Alexion’s first complement inhibitor in 2007 as a treatment for a single rare disease. Today, that same medicine is approved for four indications, spanning hematology, nephrology, and neurology, and Alexion has obtained approval of a second complement inhibitor with hematology and nephrology indications.”

Since those exciting early days, decades of Alexion-led investigation and real-world evidence continued to uncover the connection between dysregulation of the complement system and certain rare diseases, and showed that targeting and selectively inhibiting the complement system has the potential to make a powerful impact in many of them.  This work is continuing today, propelling research in the field forward and creating the roadmap for designing and pursuing impactful clinical trials.

“As pioneers in complement inhibition, we take our responsibility to patients very seriously. From there, our persistence and dedication to becoming champions of the science lead the way,” said Susan Faas, Executive Director, Complement Research and Strategy. “We are currently exploring the therapeutic potential of complement inhibition in more than 15 indications, but we won’t stop there. We continue to drive research to uncover diseases where there is emerging evidence that complement inhibition may be an impactful treatment option, including some conditions of the blood, kidneys and nervous system.”

Alexion is continuing to unlock the potential of this primitive system, by finding new ways to target and inhibit other proteins in the complement cascade, which may be the key to accelerating the discovery and development of new life-changing therapies for even more patients.