The emergence of the field of protein degradation can be traced back to the 1960s when researchers first observed signs of the natural recycling system present in cells. Pioneering medical advancements using this system and led by Bristol Myers Squibb would usher in groundbreaking improvements in the management of multiple myeloma and prompt the establishment of an entire new class of therapeutics with the potential to act on targets that had previously been considered “undruggable.”

A look back at an “unknown” past 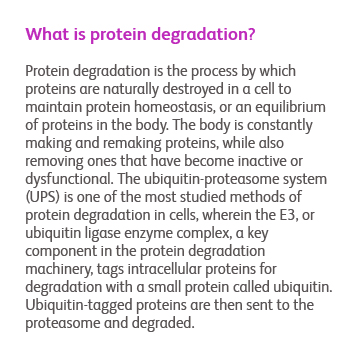 The use of protein degradation in the clinic began more than two decades ago when Bristol Myers Squibb (then Celgene) drew learnings from previous drugs to develop the first IMiDs (immunomodulatory drugs) to treat hematologic malignancies, including multiple myeloma. Scientists at that time did not understand the mechanism for IMiD efficacy, and knowledge was based empirically on phenotypic observations in preclinical models and in clinical trials. From these developments, IMiDs became and have remained a standard of care in multiple myeloma treatment.

In 2010, scientists from Japan shed light on how these compounds interact with cereblon, an important target protein receptor in an E3 complex. Soon thereafter, scientists at Bristol Myers Squibb and Harvard University discovered that the binding of this class of agents to cereblon leads to specific degradation of the transcription factors Ikaros and Aiolos, which regulate the expression of multiple genes influencing the immune system, providing critical insight into the mechanism of action for the approved IMiD agents.

Scientists were then able to understand and provide evidence regarding how these medicines worked — engaging a natural process in the body.

Learnings from the success of early IMiDs and discovery of the protein degradation mechanism of action have allowed Bristol Myers Squibb to bring multiple additional protein degrader agents into the clinic, including iberdomide, a next-generation molecular glue degrader currently being studied in multiple myeloma which was developed with the intention of improving the clinical profile of approved IMiDs.

These learnings also helped bridge the research and discovery leap to intentionally designed degraders — degraders designed and developed from discovery to clinic achieving their pharmacologic effect with a specific mechanism of action. Bristol Myers Squibb is developing several degraders with the aim of optimizing the mechanism of IMiDs through more potent degradation of targets to overcome IMiD resistance as well as targeting novel proteins for new indications.

“We have come so far as a field from where we were just 10 years ago. We are now working in a very systematic way with an abundance of knowledge regarding protein structure and the degradation process. Our efforts build upon years of internal expertise and know-how to not only develop but also optimize these compounds” 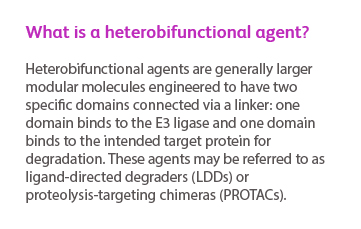 As efforts continued in the discovery of new molecular glues, the learnings also catalyzed efforts to engineer a more structurally complex class of protein degraders — heterobifunctional agents. These agents are particularly useful for targets that don’t have a structural motif amenable to the molecular glue approach, opening up this area of drug discovery to relevant targets in solid tumors.

Sophisticated imaging techniques, such as cryogenic electron microscopy, have allowed researchers to see the details of protein structures and how proteins interact with one another, further enabling purposeful advancements and informing these intentionally designed therapeutics.

As a leader in the protein degradation field having now launched multiple successful protein degrader agents, the company is building on its legacy and scientific and clinical expertise to discover and develop intentionally designed degraders. These agents have incredible potential to target highly biologically validated disease targets that until now have been “undruggable.” They also may be used in combination with other therapeutic approaches to optimize patient outcomes.

“We are eager to see how this burgeoning field of protein degradation evolves to realize its true potential. Above all, we want to see improved outcomes for patients with cancer and other serious diseases. We are encouraged by the continued efforts and achievements we are seeing in the industry to advance the therapeutic efficacy of degrader treatments”

With an industry-leading pipeline fueled by technology, data, and experience, the company is poised to realize the potential of protein degraders for diseases with serious unmet therapeutic needs.