The first results from the largest screening study yet conducted in the United States of individuals at above-average risk for the blood cancer multiple myeloma have revealed higher rates of a myeloma precursor condition in older adults who are Black or who have a close family member with a current or past blood cancer.

The initial findings among 7,622 participants, including 2,439 Black people, in the PROMISE study were reported by investigators from Dana-Farber Cancer Institute at the 63rd American Society of Hematology (ASH) Annual Meeting. Individuals in the high-risk groups who are over 50 were found to be twice as likely as the general population to have monoclonal gammopathy of unknown significance (MGUS), an asymptomatic condition that can progress to myeloma, an incurable blood cancer.

It is estimated that 3% of Americans ages 50 and over have MGUS, although there is no routine screening for the condition in the general population. People diagnosed with MGUS have an abnormal protein in their blood but none of the damage to organs seen in multiple myeloma; however, they have a 1% per year risk of developing myeloma, which is projected to be diagnosed in 34,920 people in 2021, according to the American Cancer Society.

Dana-Farber researchers, led by Irene Ghobrial, MD, are carrying out the PROMISE study to determine the rate of MGUS in high-risk groups – primarily Blacks and people who have an immediate family member with a current or past blood cancer.  “We know that in cancers such as breast cancer and lung cancer, screening, early detection, and early intervention can make a difference in patient survival,” Ghobrial said.  With the use of highly sensitive screening methods and monitoring patients with MGUS and intervening with treatment, “it may eventually be possible to make a difference in the survival of people at elevated risk for multiple myeloma,” said Ghobrial.

Although studies have shown that people of African descent and those with a family history of blood cancers are at increased risk for multiple myeloma, no previous study had looked at the prevalence of MGUS in a prospectively followed high-risk population.

The PROMISE study, launched in 2019, aims to enroll 30,000 people ages 40 to 75 who are at above-average risk for multiple myeloma because they are Black or have a parent, sibling, or child with a history of multiple myeloma or another blood cancer. Study participants provide a blood sample that is tested for MGUS using both conventional and newer high-sensitivity techniques. All PROMISE study participants who test positive for MGUS are referred to a medical specialist in the treatment of blood cancers for further testing and follow-up.

To ensure adequate representation of people of African descent in the study population, Dr. Ghobrial and colleagues also identified and screened Black people who had contributed blood samples to a large biological specimen repository, the Mass General Brigham Biobank in Boston. For this cohort, up to 10 years of follow-up data were available.

“Ours is the largest cohort of Black people to be recruited for a myeloma screening study and the first prospective study to actively recruit people at high risk for multiple myeloma, follow them over time to accurately estimate the prevalence of MGUS, and explore outcomes for patients with this precursor condition,” said Ghobrial.

“Using screening techniques that are currently available in doctors’ offices, we show that the prevalence of MGUS in a high-risk population over age 50 – Black people and people who have a first-degree relative with a blood cancer – is twice as high as in the general United States population,” she added. “Using a novel, high-sensitivity screening technique (mass spectrometry), we detected MGUS in 14% of participants. And when we fully employ the capability of mass spectrometry to detect even minute amounts of M-protein in the blood, we can detect the protein in 42% of the high-risk population over age 50.”

As well, when the investigators examined the follow-up data for participants whose samples came from the Biobank, they found that, after a median of 4.5 years of follow-up, those with any level of M-protein had negative health effects, seen as a slightly higher mortality rate from any cause than people who had no M-protein in their blood.

“This highlights that people with M-protein are at risk of not only multiple myeloma but also of other conditions, including other blood cancers and heart attacks,” said Ghobrial. “We believe these results make a strong case that older adults who are Black or who have a first-degree relative with a blood cancer could benefit from regular, high-sensitivity screening to identify M-protein abnormalities and early intervention.”

In the future, Ghobrial and her research team hope that the PROMISE study will help identify the factors that contribute to the development of MGUS, cause MGUS to progress to overt cancer in some people but not others, and result in negative health impacts for people who have any level of M-protein in their blood.

Ghobrial presented findings on this study at the ASH press briefing “Potential Prevention or Protection? New Insights into Blood Disorders” on Dec. 11, 2021. Further details were presented by Habib El-Khoury, MD, during Session 652, Abstract 152. 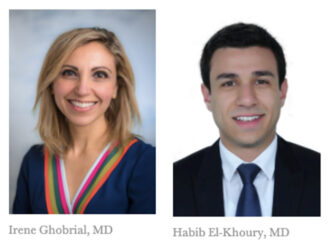