On Feb 23, 2022, STAT Trials Pulse detected a clinical trial for TG Therapeutics’ drug, umbralisib, unexpectedly stopping early due to safety issues — 51 days before the company publicly announced its voluntary withdrawal of umbralisib’s drug application and the dissolution of its oncology program.

For biotech and pharma professionals as well as investors, getting ahead of the curve can be pivotal for taking strategic and timely action. Monitoring key changes hidden in public data sources can provide a distinct competitive advantage, as these may shed light on foundational signals that may otherwise go unnoticed. 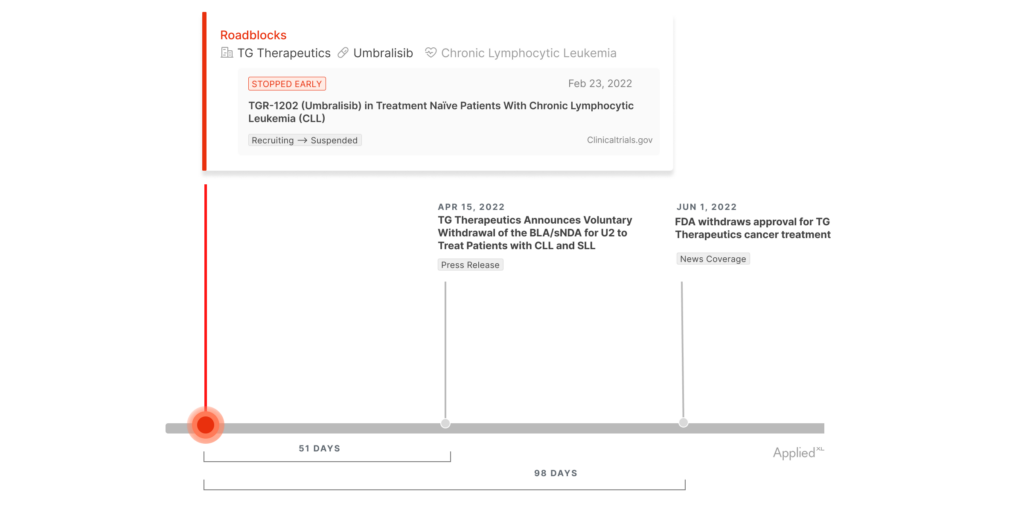 Background: In February of 2021, TG Therapeutics received accelerated FDA approval for umbralisib, a kinase inhibitor targeting lymphoma. The FDA typically accelerates approvals of drugs that treat serious conditions and that fulfill an unmet medical need, based on a surrogate endpoint.

A hidden signal: A year later, what appeared to be a promising treatment candidate saw an unexpected setback. In February 2022, a TG Therapeutics-sponsored study was suspended due to increased Serious Adverse Event (SAE) Occurrence. The nature of this suspension is relatively rare, accounting for only about 2% of trials that stop early and signals serious disruptions to a drug’s development. This consequential signal was detected and prioritized by STAT Trials Pulse’s proprietary algorithm among thousands of other daily clerical updates on the NIH’s public trial registry.

The impact: 51 days later, on April 15, 2022, TG Therapeutics announced the company would be voluntarily pulling umbralisib from the market, as well as withdrawing its application for use of this drug in other types of lymphoma. This decision was based on ongoing challenges with the drug’s overall survival and safety data.

The fallout: The impact of this decision by the FDA led the company to terminate remaining trials in the umbralisib program, as well as halt enrollment in earlier stage oncology trials. The company is currently facing a class action lawsuit on behalf of people who purchased its stock, citing a violation of the Securities Exchange Act  —  ultimately claiming that TG overstated the clinical and commercial prospects of its new drugs.

The bottom line: In this instance, the early indicator surfaced by STAT Trials Pulse in February could have provided a warning signal of the subsequent unraveling of the umbralisib program. For investors, biotech professionals, and competitive intelligence analysts in the pharmaceutical industry, time is often of the essence. With a 51-day head start, the ability to take early action before news broke could have provided a competitive advantage.

To get early signals like this about the companies, drugs, and diseases you want to monitor, start your 30-day free trial.